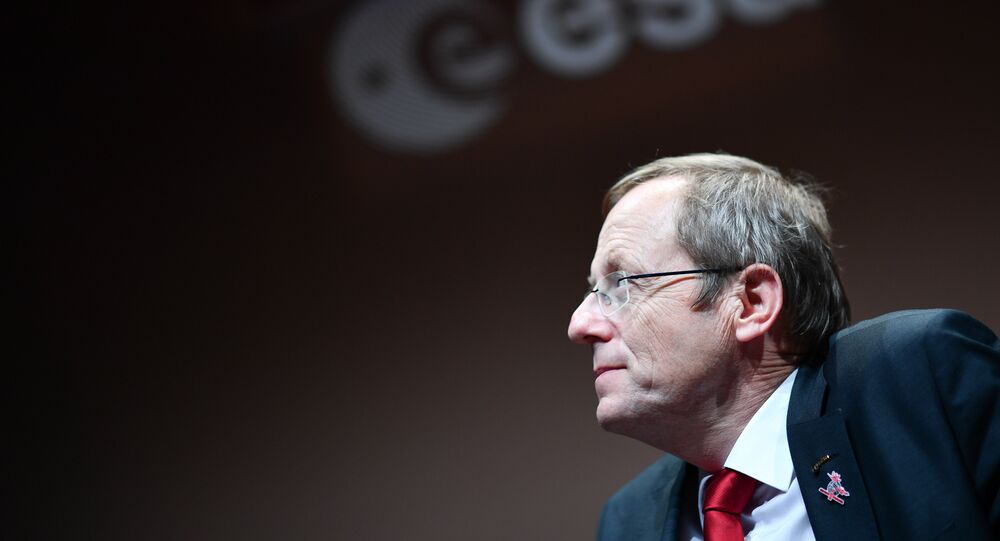 "We are ready and we are open for all areas of cooperation. We just have to define it, we have to find it," Woerner said. "As we have this intensive interaction with Russia, we will find other areas of interaction but it must be in the interest of both sides."

"I’m looking forward to have some more missions together as I mentioned for instance to go to the Moon with Lunar Resurs," he added. "This is an interesting mission and I will be in Russia this summer and I will try also then to discuss more intensively about future projects."

"Right now we are launching, we are cooperating on ExoMars, and then some other areas," he noted. "In several areas we are cooperating with our Russian colleagues, for instance, also Lunar Resurs. We also will have another launch of a European satellite from Plesetsk in Russia so there are many interactions with Russia. It's a very intensive relationship and it’s a very positive relationship."

When asked about the space data sharing between ESA and Roscosmos, Woerner said that they have a very transparent and fruitful cooperation on that.

"In general terms I’m always looking for global cooperation because I believe humans should cooperate globally," he added. "Of course, intellectual property rights, human rights and all of this stuff is something that we have to consider so there are some countries where we are a little bit more cautious but with Russia we have a very open policy."

The first tests of various parts for the second ExoMars expedition planned for 2020 will begin not earlier than next year, Jan Woerner told Sputnik.

© Sputnik / Vladimir Sergeev
European Space Agency Plans to Cooperate With Russia on Three Moon Exploration Projects
"So far, we are in a very good situation, the discussion between Roscosmos and ESA is very intensive," Woerner said. "We are in a very good mood and the tests of all the different parts will happen within the next year. I cannot tell you exactly but it’s on a very good path."

Joint experiments by Russia and NASA on isolation of people within the framework of preparation for manned flights to the Moon and Mars are necessary, however, do not represent a substitute for real flight, Jan Woerner said.

"Of course, these isolation studies are important but they will not substitute really for a flight," Woerner said on the margins of the Space Symposium in Colorado Springs. "I mean you need the experience of a real flight because it’s different psychology. There is no way to go home directly. If the doors are closed, this is one thing but if you are really on a trip to Mars that’s a totally different story."

Woerner added he does not believe there will be human flights to Mars in the next 15 years.

"There is some necessity in it, and therefore ESA participated in the Mars-500 program to get more information about it because this information is not only for human space flight but also for the psychology on earth, for medical studies," Woerner noted. "So, there is some high value in it. But I think it is not substituting and not really the final result for flights to Mars."

The European Space Agency (ESA) is hopeful that France and protestors in French Guiana will find a solution soon so the postponed launch of the Soyuz rocket can be carried out as soon as possible, Jan Woerner said.

© AP Photo / ESA/D. Ducros
Roscosmos-ESA Mars Mission Starts Probing for Life on Red Planet
"My hope is that the French government and the people in French Guiana find very quickly a solution for that so that we can go on with all our launches," Woerner said on Wednesday on the sidelines of a Space Symposium in the US state of Colorado. "We have, of course, Soyuz, but also Ariane 5 — we wanted to have a launch of that. We are, of course, hoping that this solution will come very soon so that we have a normal operation as soon as possible."

When asked about a possible launch date, Woerner stated, "We do not have any dates."

On Tuesday, protesters in French Guiana pledged to stay inside the Space Center in the community of Kourou until they are given the amount of money they demanded to address economic, social and security issues.

Woerner explained protestors in French Guiana know the launch site is very important for France and for Europe.

"We are blocked totally now," he noted.

Protests and strikes have been ongoing in the overseas department of French Guiana for several weeks, with local residents dissatisfied with the level of security, social and economic situation there.

French Guiana is an overseas department, generally equal in status and rights to departments that are part of France proper. The protesters would like a status that might allow for more autonomy, which could, among other things, simplify the interactions between the region and its Latin American neighbors.