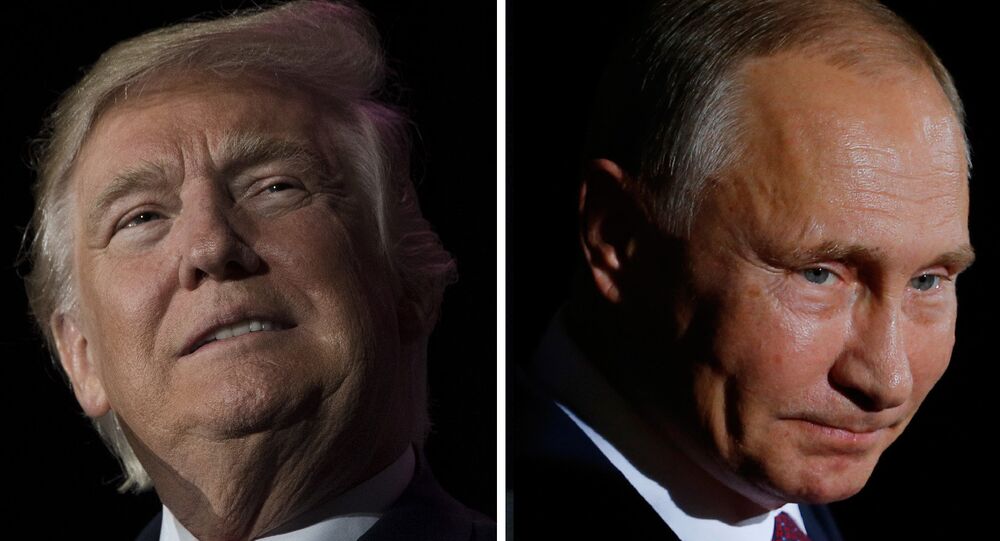 Off the Rails? German Video Game Lets Players Hit Trump and Putin With a Train

A video game created by supporters of the German Social Democratic Party allows users to drive a train conducted by candidate for German chancellor Martin Schulz over a shirtless Russian President Vladimir Putin and US President Donald Trump.

With Germany’s federal election just six months away, supporters of Schulz have seemingly taken some inspiration from the “Trump Train,” using the hashtag “Schulzzug” or “Schultz Train.” The hashtag is also the name of the tasteless new game, which was created during a hackathon event hosted by the Social Democrats earlier this month.

© AP Photo / Evan Vucci
Trump Jump: Russian High-School Students Create Game App About US Elections
In the game, users play as Schulz to maneuver the train, dodge obstacles and collect points as it heads to the chancellorship. Along the route, users are encouraged to run over and kill Trump and Putin to earn extra points. Schulz, a former president of the European Parliament, has vowed to “stand up” to Trump should he be elected.

Current German Chancellor Angela Merkel is not featured in the game, but Schulz’ far- right opponent, Frauke Petry of the Alternative for Germany (AfD) party, is. To make the game even more sinister, the 41-year-old chairwoman of the party appears to be pregnant as users run her down.

“Is this fake news, or is this really an SPD game? Whoever kills Trump and Petry with the Schulzzug wins bonus points?” Beatrix von Storch, member of the European Parliament for the AfD, tweeted about the game.

Though Merkel is not featured in the game, members of her Christian Democratic Union (CDU) party have still come out against the concept.

“Running over people in a game is not actually funny but tasteless,” tweeted CDU official Julia Klöckner.

After making headlines, the party asked the game developers to tone it down, which they complied with. Putin, Trump and Petry are no longer featured in new downloads; instead, users can run over anonymous men in suits.

Over 1,500 Mexicans Protest on US Border Against Trump's Wall Plan