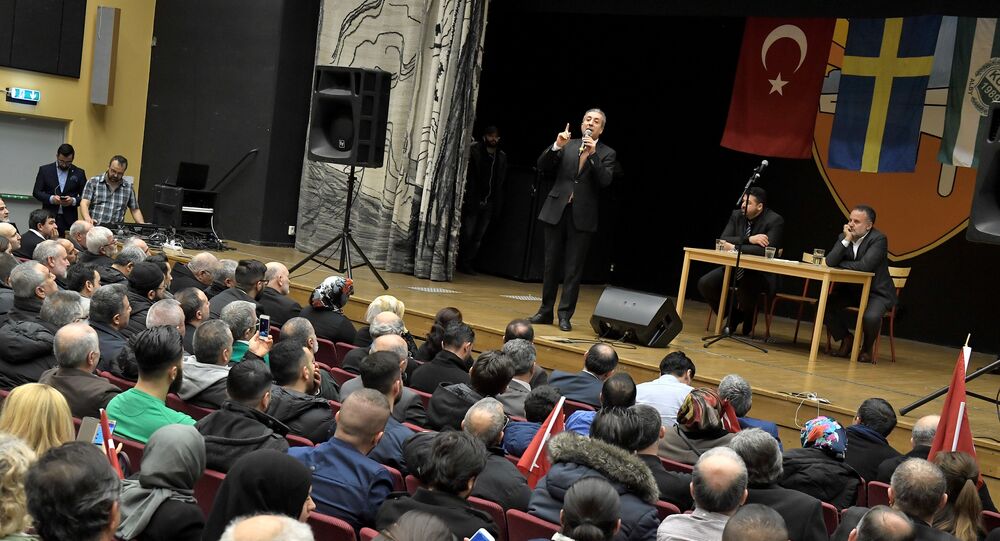 Whereas several European nations have incidentally landed in a war of words with Ankara after refusing Turkish President Recep Erdogan's emissaries, the Nordic nations of Norway and Sweden begged to differ by choosing not to confront Turkey and allow Turkish envoys exercise their freedom of speech.

© AFP 2020 / ADEM ALTAN
Denmark Shuns Turkish Politicians While Sweden Welcomes Them With Riots
Earlier this week, Cuma Icten, a representative of Turkish President Recep Tayyp Erdogan's Justice and Development Party (AKP), held a meeting in the Norwegian city of Drammen. The meeting with members of the Turkish diaspora was held behind closed doors at Drammen Mosque and about 30 people reportedly showed up.

While it is widely believed that the goal of similar rallies held across Europe is to garner support among fellow Turks in the upcoming referendum on April 20 on expanding President Erdogan's powers, Cuma Icten denied the fact the was campaigning for Erdogan.

​"I am here to increase participation among Turks. In Turkey, the participation is 87 percent, as opposed to only 37 percent in Norway. The theme is not Erdogan, be it for or against him," Cuma Icten told Norwegian national broadcaster NRK. However, Icten admitted that he was one of the founding members of the AKP and said that the party members are "very fond of President Erdogan."

Unlike neighboring Sweden, where a Stockholm rally with a senior AKP member spilled over into riots, the Norwegian meeting was held in peace. In Sweden, Culture and Democracy Minister Alice Bah Kuhnke defended the choice to allow AKP International Secretary Mehmet Mehdi Eker's campaigning citing freedom of speech. Despite the fact that Eker was not formally invited, Sweden did nothing to prevent his election tour, which many, including Sweden's Kurdish diaspora, regarded as controversial.

​In Norway, Jon Helgheim of the Progress Party stated it was perfectly okay to hold meetings like that in Drammen, but expressed hope that the Turkish diaspora would stand its ground against AKP's campaigning, which is expected to feature a rally in Oslo.

"Personally, I value the freedom of expression very highly. In principle, I believe that we must accept the fact that foreign politicians run different errands in Norway, including campaigning," Jon Helgheim told NRK, admitting that he was worried about AKP's policy and expressing hope that Drammen's Turkish community can stand up and reject Erdogan's ways.

© REUTERS / Yves Herman
What's Behind Erdogan Accusing European Countries of 'Fascism'
Norwegian Foreign Minister Børge Brende stated that Norway had no plans of showing Turkish or any other politicians the door.

"We have a high threshold in Norway for refusing people to come here," Børge Brende said, as quoted by Norwegian newspaper Romsdals Budstikke.

Campaigns in Sweden and Norway are part of AKP's attempt to garner support from fellow Turks abroad for the upcoming referendum. Sweden, a nation of 10 million, has a significant Turkish diaspora of 75,000 people, of which 45,000 were born in Turkey. Norway, a nation of 5.2 million, boasts a Turkish community of over 17,000 people, the majority of whom live in the Oslo region, including Drammen.

Sweden and Norway stood out against fellow European nations, which refused Turkish politicians' pro-Erdogan campaigns and ended in a bitter spate with Ankara. President Erdogan himself compared the Dutch and the Germans, who closed their doors to his emissaries, with fascists and Nazis. Austria and Switzerland also canceled similar campaign meetings, whereas Danish Prime Minister Lars Løkke Rasmussen urged his Turkish counterpart Binali Yildirim to call-off his upcoming visit to Denmark.

Merkel: 'It is Depressing and Sad to Hear' Comparison With Nazis From Erdogan