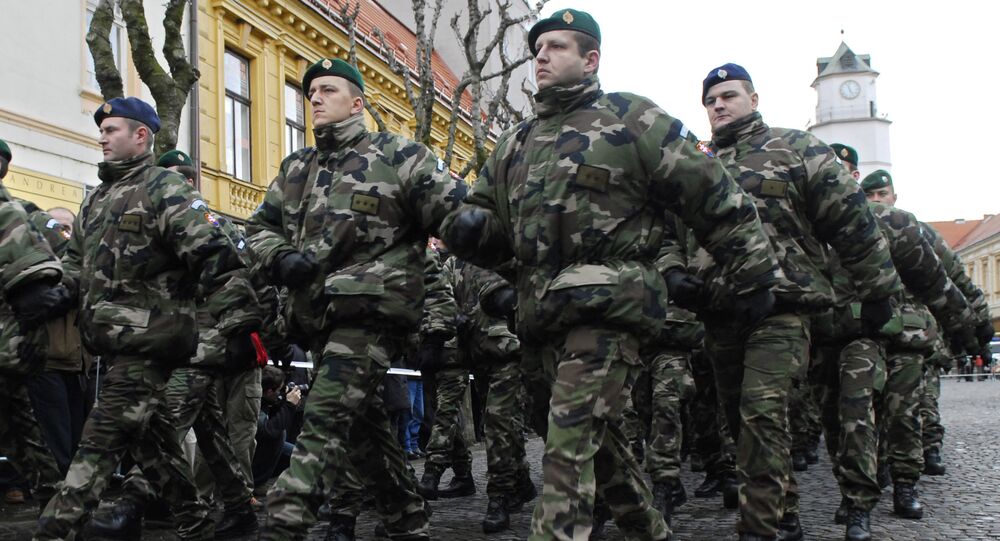 In an interview with Sputnik Czech Republic, Jozef Zarnovican, chairman of the Association of Slovak troops, focused on an array of problems pertaining to the Slovak army, which he said was turned into a mercenary organization.

© REUTERS / Francois Lenoir
NATO Cites Aggression Fears While Opening Office in Slovakia
Is the Slovak army becoming a mercenary organization? This is the assertion of Jozef Zarnovican, chairman of the Association of Slovak troops, who spoke with Sputnik Czech Republic.

The interview came after an opinion poll conducted in the Czech Republic revealed that 66 percent of respondents are skeptical about the country's ability to defend itself in the event of an armed conflict.

"The Slovak Armed Forces are capable of protecting just 20 km of the borders and attacking on a 2-km plot of land," he said referring to "the guidelines and instructions related the Warsaw Pact," which was dissolved in 1991.

He said that "people remember the time when the Slovak army was a last resort that they could turn to in order to resolve issues related to natural disasters, floods, fires or evacuations."

"But times have changed, and the people's army [in Slovakia] has turned into a mercenary organization, which continues to defend the interests of corporate fascism, financial moguls and political criminals. Instead of strengthening our defense capability, we send soldiers to the [EU] border with Russia to provoke rather than defend. People know about it and they don't trust the army's leadership," Zarnovican said.

According to a 2004 Slovak Foreign Policy Association publication on the foreign policy of Slovakia after NATO and EU accession, "the prevailing opinion was that the key national interests of Slovakia in international relations were fulfilled by its accession to NATO and the EU," and that defending the country's national interests was considered 'obsolete'.

"Bearing the responsibility for international stability and prosperity" was substituted as a defining characteristic of Slovakia’s foreign policy in the post-accession period.

Focusing on the problems the Slovak army is now facing, Zarnovican said they are related to "poor organization on the verge of abuse of power among the army's top brass."

The inefficient use of money on unnecessary vehicles, including some US-made aircraft and other sophisticated weaponry, also damages the Slovak army's defense capability, according to Zarnovican.

© AFP 2021 / JONATHAN NACKSTRAND
Slovakia Set to Acquire 30 Advanced Tanks From Poland
The logistics-related issues also have yet to be resolved in the Slovak army, he said, adding that ordinary people have no idea about it, otherwise they would demand an explanation from politicians.

Last year, Poland's Defense Ministry said that the Polish and Slovakian governments were negotiating the purchase of eight-wheel drive Rosomak armored modular vehicles (AMV), which are made Slovakia.

The deal was designed to enable the Slovak Armed Forces to replace their outdated OT-64 SKOT armored personnel carriers, first designed back in the 1960s.