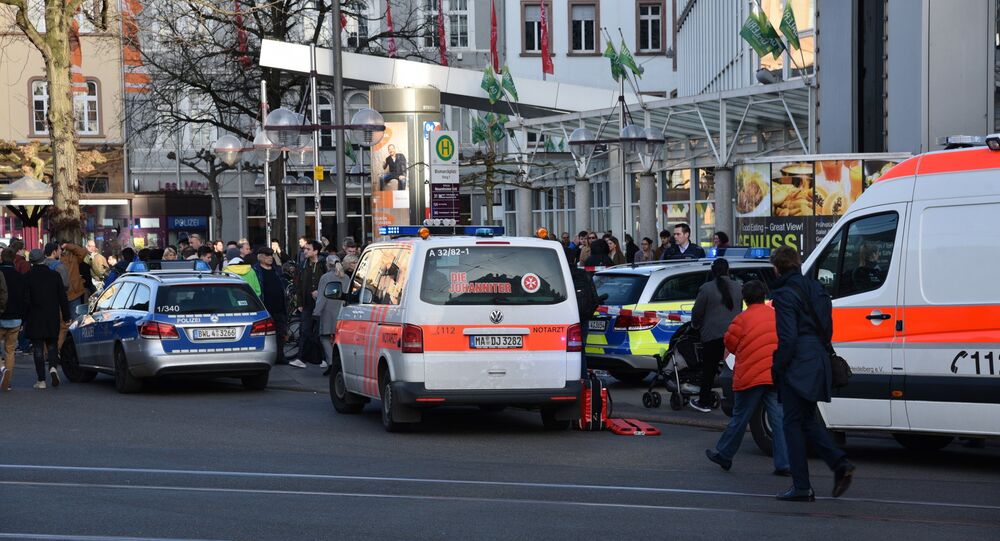 A man apparently armed with a knife rammed a car into pedestrians in the center of the German city of Heidelberg on Saturday, local N24 TV channel reported citing police. Three are reportedly injured.

After the incident that occurred at some 16:00 p.m. local time, German police reportedly shot the man after he attempted to flee. Currently, the man is in a hospital.

One pedestrian wounded in the incident is in a critical condition.

Media reports suggested that the man was armed with a knife.

#BREAKING The attacker in Heidelberg escaped from the scene with a knife, then shot by the police: Germany media pic.twitter.com/DqHkUhiXVZ

The man who drove a black Opel was intercepted by a police patrol and shot by a law enforcer after a short standoff.

A police spokesman David Faulhaber told Sputnik that he "can neither confirm nor deny" that the incident is a terror attack. He also could not say whether those injured are the city's citizens or not.

According to another police spokesman, Norbert Schaetzle, a terrorist attack is currently not being considered as a reason for the incident, media reported. Moreover, he said that the man acted alone.

German media cited police as saying that they don't suspect the an Islamist background in the attack.

Norbert Schätzle, the city's police spokesman, told N24 that he cannon confirm the specualations claiming that the man is mentally ill.

"We are currently identifying the suspect's identity and the motives of his act. The man currently is unable to speak," Schätzle said.

No further details are available at the moment.

The area has been cordoned off by police.

Three Killed, 20 Injured as Car Rams Into Crowd in Melbourne