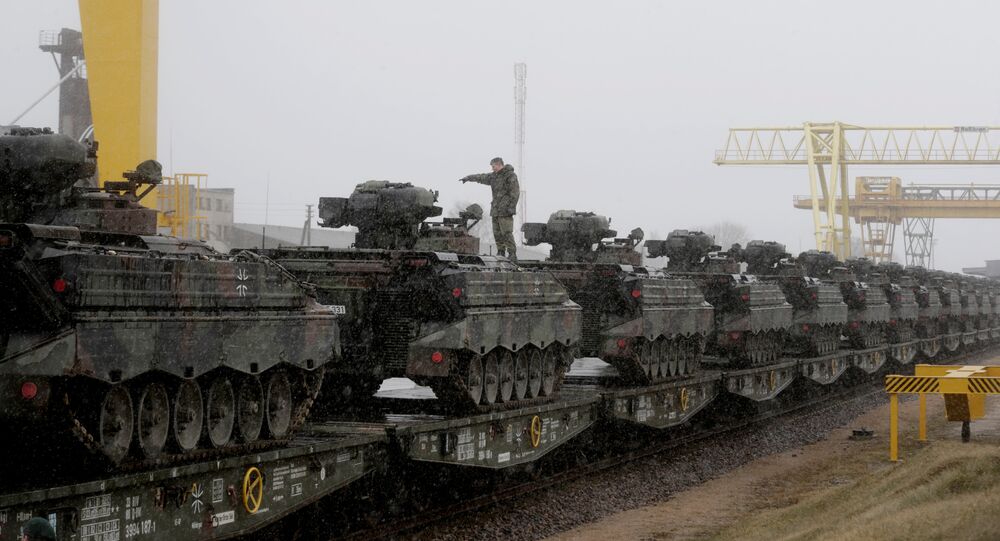 "It's impossible to imagine a German Chancellor sending tanks to the Russian border. Stop these madmen," Mandy Simon wrote in response to an article on the German military equipment heading to Lithuania published in Focus, a German weekly news magazine.

Germany is one of four nations tasked with establishing one of four NATO battle groups in Eastern Europe and the Baltic region. Belgium, Croatia, France, Luxembourg, the Netherlands and Norway will also contribute troops to the German-led battalion in Lithuania.

© AP Photo / Matthias Schrader
Germany to Increase NATO Commitment, Up Troop Size to Almost 200,000
"What do we want on the Russian border?" Klaus Graf asked. "Due to our history we are indebted to the whole world forever. And now we are standing close to Russian border."

"Is this also a preparation for an attack camouflaged in propaganda garb?" Petra Maschenke asked.

"On the one hand, [the alliance] has said that a dialogue with Moscow is necessary, mentioning joint threats that could be dealt with together. On the other hand, the bloc has tirelessly spread wild speculations on Moscow's supposedly bloodthirsty plans which have to be stopped. This is not a mixed message, but a chronic cognitive dissonance," he said.

© AP Photo / Massoud Hossaini
US-Led NATO Training Exercise to Be Held in Southeast Germany
Those who support NATO's muscle flexing in Eastern Europe and the Baltic region are the ones who have "deprived Europe of peace and security," he added.

"Anyone understands that if a major conflict breaks out all military equipment deployed to the Baltic States and Poland will become scrap pile. But what will become of people in those countries whose leadership has turned them into hostages of an artificially fueled confrontation with Moscow? The West has blamed Russia and the Soviet Union for annexations and occupations," he observed. "However, what is currently happening in the region could also be figuratively referred to as an 'occupation' which has taken place with the approval of local authorities whose very existence depends on Western support."