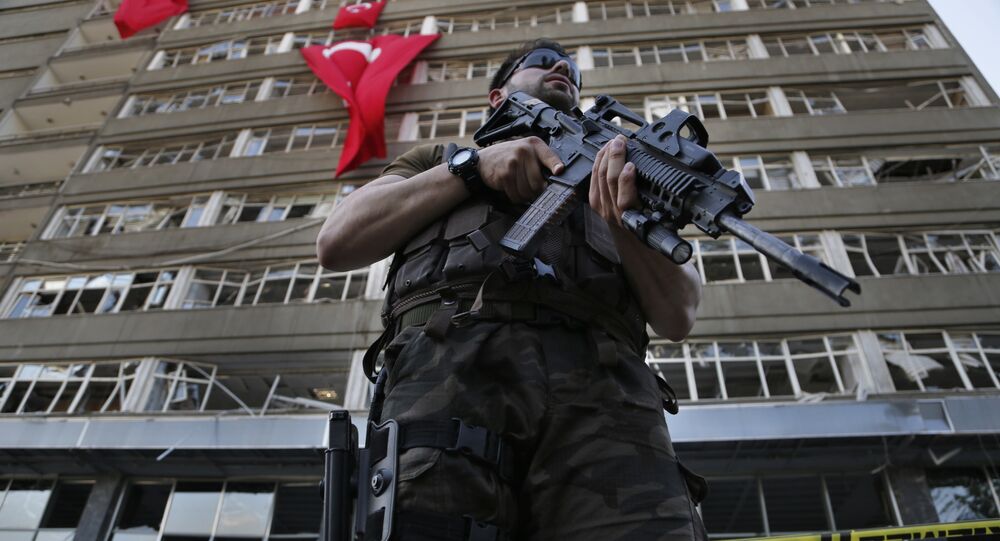 Ankara has urged Athens to again try eight Turkish soldiers that fled to Greece after the recent failed coup attempt. Turkey is reportedly considering breaking the EU-Turkey migrant deal, should Greece refuse, and this decision might have repercussions all across Europe.

© AFP 2021 / OZAN KOSE
Turkey Protests Ruling of Greek Court to Not Extradite Turkish Soldiers
Turkish Foreign Minister Mevlut Cavusoglu announced that Ankara has urged Athens to retry eight Turkish soldiers that fled to Greece after the failed coup attempt last year. Earlier on Thursday the Greek supreme court ruled that the soldiers would not be extradited. This decision cannot be appealed.

"We demanded that the eight soldiers be tried again. This is a political decision, Greece is protecting and hosting coup plotters," Cavusoglu said in an interview with a Turkish TV station.

"As a country which experienced coups in its past, Greece, with this decision, has unfortunately become a country which protects coup plotters," the Turkish foreign ministry said in a separate statement.

Turkey has threatened to cancel its commitment to the migrant deal, intended to reduce the flow of illegal immigrants to the European Union, over the matter.

European Commission spokeswoman Natasha Bertaud, refuting the threats, said that she was confident that the migrant deal would remain in place.

"The EU-Turkey statement continues to be applied by both sides and we are confident that it will remain the case."

Greek Prime Minister Alexis Tsipras has observed that the Greek justice system is independent from the government and its decisions are binding, even when it comes to international affairs.

"The Greek government has vehemently condemned […] the coup attempt and supported the democratically elected government in our neighboring country," Tsipras noted.

He also added that, "those responsible for the coup are not welcome in our country."

The soldiers, who remain in police custody "for reasons of national security," according to Greek state agency ANA, claim that they had nothing to do with the attempt to overthrow Turkish President Recep Tayyip Erdogan, stating that they fled because they were afraid for their lives.

Ankara has become skeptical of the migration deal it signed with the EU, since the bloc has not fulfilled a part of the bargain which includes providing Turkish citizens visa-free travel. Recent developments may become a cause for the termination of the deal.

According to Deutsche Welle, a number of Turkish citizens are currently hiding in various NATO countries, of which both Greece and Turkey are member states. Despite that relations between the two countries has improved recently, memories of a 1996 crisis are still vivid.

"The fate of [the soldiers] is likely to be a test marker for the rest of the military alliance," according to a Deutsche Welle report.