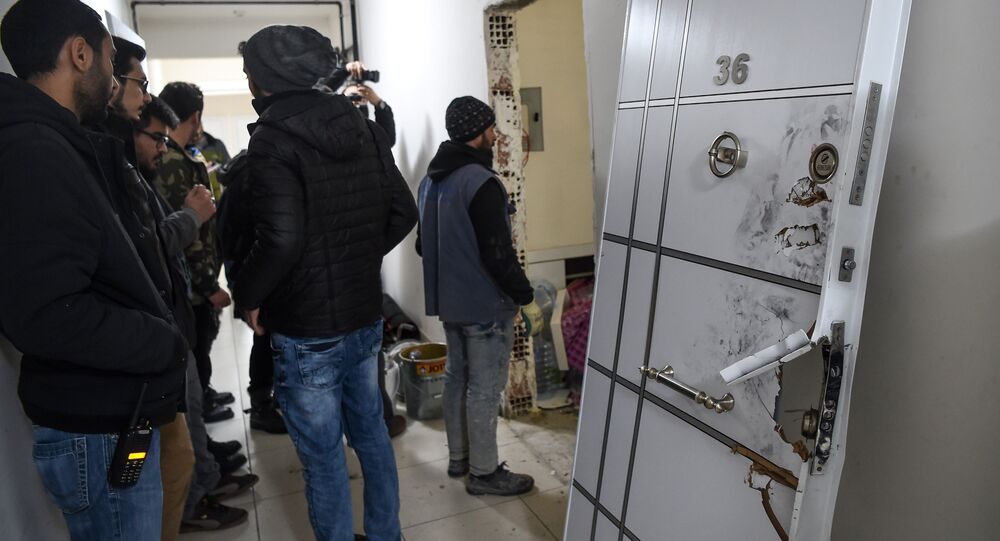 An assortment of small arms, a hefty sum of money and love notes were among the items uncovered by police searching the apartment of the suspected gunman allegedly responsible for the shooting at an Istanbul nightclub on New Year’s Eve.

The suspect, a native of Uzbekistan named Abdulgadir Masharipov who has been on the run for two weeks, was arrested in Istanbul's Esenyurt district along with several other suspected terrorists.

A police search of Masharipov’s apartment yielded several handguns, a UAV and a considerable sum: approximately 197,000 USD, along with Iraqi and Libyan money.

​According to Huirriyet, among the items that caught the attention of journalists who were allowed to view the scene by the authorities were love notes written in Turkish.

© AFP 2021 / OZAN KOSE
A picture taken on January 17, 2017 shows pieces of paper and money in the apartment where the main suspect in the Reina nightclub rampage was arrested by Turkish police the night before, in Istanbul.

The fridge at Masharipov’s apartment was well stocked with provisions, suggesting that the terrorist was preparing to lay low there for quite some time. The windows were also covered with blinds, ensuring that no one would be able to peek inside the apartment from outside.

​Abdulgadir Masharipov is suspected of carrying out a terrorist attack in Istanbul's Reina nightclub on January 1, killing 39 people and wounding almost 70 others. The responsibility for the attack was claimed by the infamous terrorist organization Daesh (ISIL/ISIS).

​Masharipov, who is currently being questioned by the authorities, has already confessed that the $197,000 found in his apartment had been provided by Daesh in order to facilitate his escape following the attack.