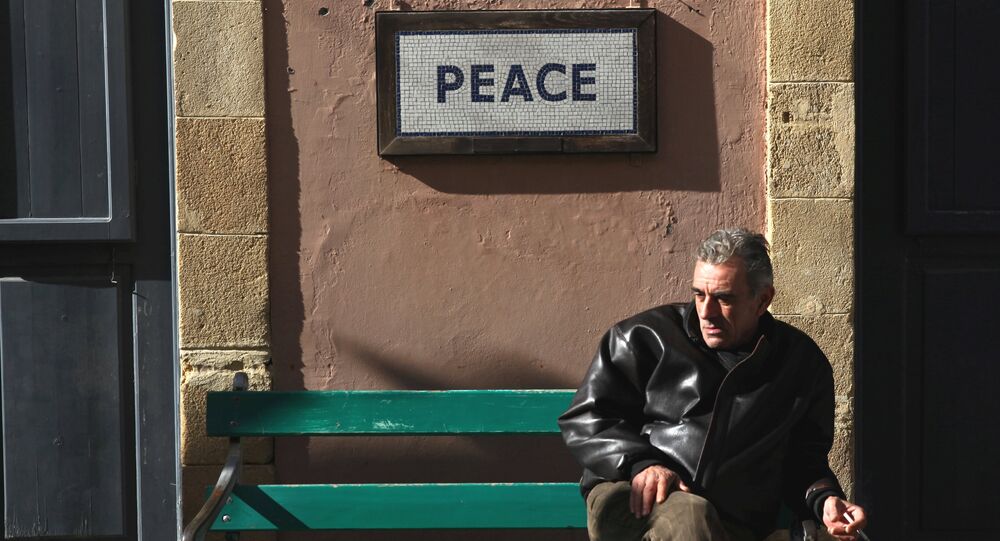 Talks to break the decades-long deadlock over divided Cyprus, attended by new UN chief Antonio Guterres, have been called too hastily and will not produce a "breakthrough," Sputnik has been told by a senior academic who has put forward an alternatives set of proposals for discussion.

Guterres attends talks in Geneva, January 12, alongside Commission President Jean-Claude Juncker and foreign ministers from Cyprus' so-called guarantor powers — Britain, Greece and Turkey — in an attempt to broker a deal over a country, which has been divided between a Turkish north and internationally-recognized Greek south since 1974.

International Conference on #Cyprus opens today at the #PalaisdesNations. A chance to forge a bright future for Cyprus! @UN_Cyprus pic.twitter.com/XZDTyoe8UX

​Ahead of the talks, Juncker said the meeting in Geneva was the "last chance" for agreement over the issue, which started when the Turkish military intervened after a junta in Athens orchestrated a Cypriot coup to unite the island with Greece. Only Ankara recognizes the Turkish north.

We must seize the moment for Cyprus‘ unification. All Cypriots deserve a joint European future. #EU here to support: https://t.co/IiKc7e5vh5 pic.twitter.com/3wt4nQFRY0

​"I don't think it's a last chance. I think it's been very hasty. When it was decided in December 2016 to meet in Geneva, there were serious differences between the two sides. The understanding was that there should have been a meeting to discuss the international aspect of the Cyprus problem, security and the guarantee issues," Andreas Theophanous, Professor of Political Economy and President of the Center for European and International Affairs, University of Nicosia told Sputnik.

"There was an attempt to put more issues on the table in Geneva. At present, I would be very much surprised if there is a breakthrough. I think is has been pushed too hastily by various parties, including Turkey, the EU and UN Special Adviser to the Secretary-General, Espen Barth Eide.

"He wanted to go away with diplomatic success, but it was too hasty. And I think it was a mistake on the part of the President of the Republic of Cyprus to accept this. It was a serious mistake," Professor Theophanous told Sputnik.

The alternative proposal for the Cyprus problem put forward by Andreas Theophanous and his team includes turning the occupied areas in the northern part of Cyprus into an EU region under Turkish Cypriot administration, the gradual return of territories under Greek Cypriot administration, gradual implementation of the four basic freedoms and gradual implementation of the obligations of the Turkish Cypriot community.

As part of an evolutionary process he calls for the normalization of relations of the Republic of Cyprus with Turkey, the establishment of a roadmap for the next steps and guidelines for a federal constitution as a result of a synthesis: "more specifically, it is essential to amend the 1960 constitution which is based on consociational democracy and introduce elements of an integrationalist federal model as well."

​Theophanous says it is also important for the EU to undertake its responsibilities in the harmonization process of the occupied territories of Cyprus with the acquis communautaire [the accumulated EU law]. He says that, within this framework it is also essential to launch a process of internal political, social and economic convergence.

"Turkey must assume its own responsibilities as well. It should be remembered that when Turkey invaded Cyprus on July 20, 1974, it had put forward the position that its objectives were the restoration of the constitutional order of the Republic of Cyprus and the protection of the Turkish Cypriot community. Turkey should contribute toward this direction. The first steps should be the end of the ongoing colonization and the beginning of the withdrawal of the occupation troops," Professor Theophanous told Sputnik.

© AFP 2020 / Behrouz Mehri
A couple walk through the buffer zone as they cross from the Turkish-controlled northern Nicosia to the Greek side of the Cypriot capital via Paphos Gate pedestrian border crossing on June 28, 2012.

He believes that any solution should be the outcome of a voluntary agreement between the two sides in Cyprus. The evolutionary approach will give the time required for the gradual strengthening of relations between the two communities and the formulation of the concept of an integrationalist federal indivisible state.

Cyprus Reunion Conference on January 12 to Focus on Security Guarantees

Cyprus Crisis to Be Settled After All Disputable Issues Resolution - Official

Urge to Merge: Cyprus Reunification Referendum Could Be Held 'Mid-2017'