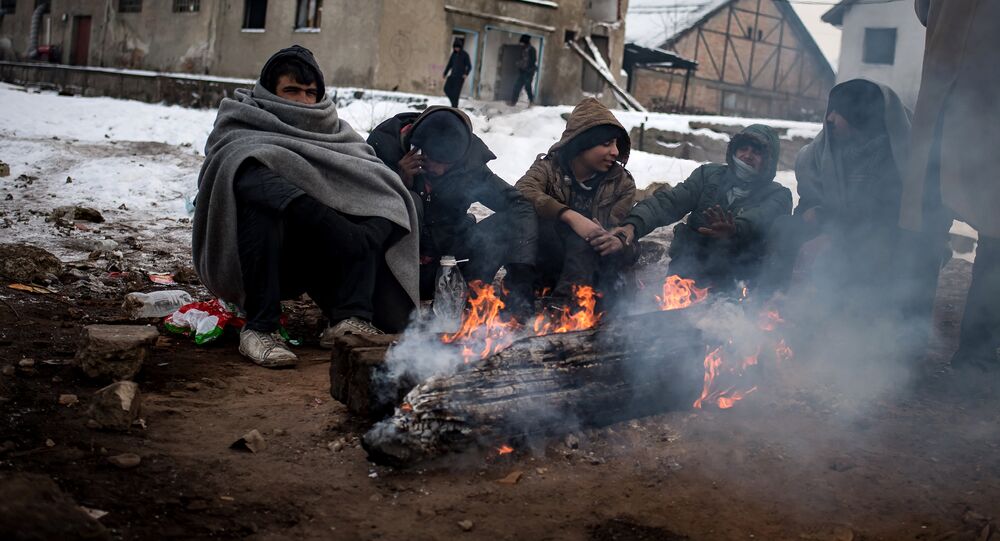 Migrant Crisis Could be Tackled Only by Brussels, Which is Unwilling to Solve It

Serbia, which is not part of the EU has found itself in the middle of the migrant crisis, after the closure of the Balkan route, used by migrants to break into the EU. At least a thousand migrants are now sleeping rough in the county’s capital. Sputnik discussed the issue with Ivan Miskovic, a spokesperson for the Serbian Commissariat for Refugees.

The Balkan state of Serbia struggles to cope with the still ongoing refugee crisis. Reports suggest that at least a thousand migrants are sleeping rough in the county’s capital Belgrade.

Packs of refugees have been in the country for months on end, but the Serbian government has only been able to provide accommodation for about six thousand.

Serbia, which is not part of the EU, has found itself in the middle of the crisis, after the closure of the so-called Balkan route, used by migrants who want to reach EU states.

On March 9, 2016, the president of the European council, Donald Tusk, declared that “irregular flows of migrants along the western Balkans route have come to an end,” after the closure of a humanitarian corridor that funneled asylum seekers from Greece to Germany and the erection of fences along parts of the Macedonian, Hungarian and Austrian borders.

Despite the fact that neighboring Hungary and Croatia have closed their borders, refugees are still trying to reach these countries via Serbia.

Radio Sputnik discussed the issue with Ivan Miskovic, a spokesperson for the Serbian Commissariat for Refugees and Migration.

"The mere fact that migrants are sleeping rough somewhere in the center of the Belgrade city is only their choice, because what we are doing at the moment and what we used to do is providing information that they are all more than welcome to be accommodated in any of the centers managed by the Commissariat for Refugees," he told Sputnik.

However, he added, the Serbian authorities have received a negative answer for a number of reasons: somehow they refugees not trustful regarding their positive intentions to provide accommodation for them.

"They are actually waiting for their money from the smugglers to come via Western Union and thus are not willing to be accommodated in the centers," he said.

Miskovic reiterated that the authorities do not want anybody to get sick or have any other health issues because of extremely low temperatures at the moment. However what they have managed so far is only to persuade some 400 people to be accommodated. However there are still some thousand or more people in the barracks, in the parks and in public places in the very center of the city.

Serbia officially has 6,000 beds in 19 centers of 15 local municipalities for migrants, he explained. But even if 1,000 more migrants accept the accommodation offer in some of the centers, the authorities could provide additional beds.

The Serbian official explained that before the closure of the so-called Balkan route. The flow of the people used to be quite high. In August-September 2015 they had from 10,000 to 12,000 migrants registering per day in the town of Presevo.

© REUTERS / Yannis Behrakis
Everything You Ever Wanted to Know About Migrants But Were Afraid to Ask in Italian
However the situation is completely different at the moment, he said. What they have now are a few dozen illegal refugees per day. Compared to the summer months the situation is quite harmless and bearable, he said.

Nevertheless Ivan Miskovic noted that the lack of a unified European answer to the problem complicates its solution. It would be to the benefit to all countries if the crisis is tackled in a proper and stable manner from Brussels, he said.

For now, there is no such approach and no response from Brussels, which is why they have so many stranded migrants in Serbia and in Greece.

"There seems to be no resolution to this problem in sight. At the moment, the most important thing is to help those people stuck outside and to wait for some unified resolution and answer from Brussels," he finally stated.