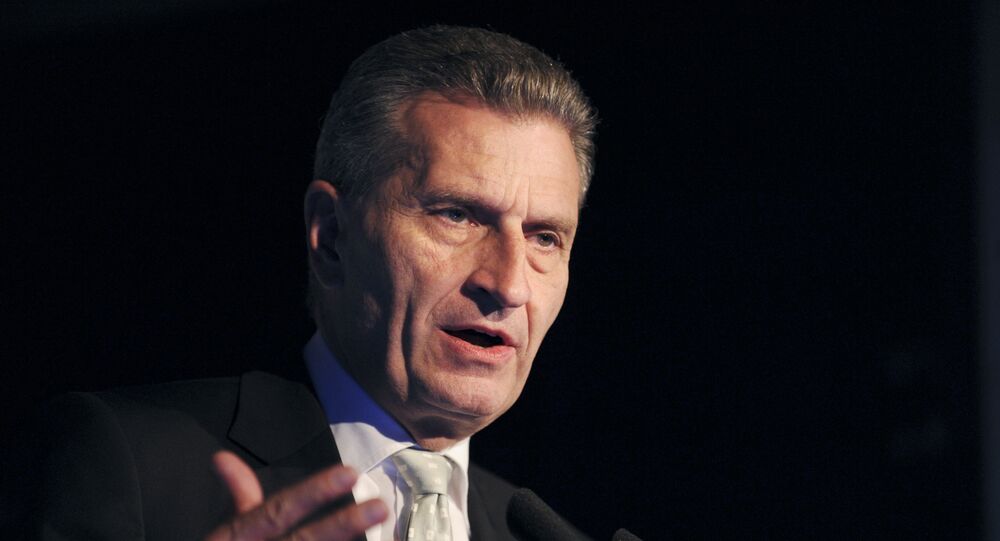 EU Commissioner Gunther Oettinger is set to be grilled by MEPs on Monday, January 9, as he makes an appearance before the European Parliament. While backed by senior figures in Brussels, critics have condemned the German politician's recent promotion, citing racially charged comments made about a Chinese delegation.

Three parliamentary committees will quiz Oettinger on Monday night over his new position as commissioner for Budget and Human Resources, with a two-and-a-half hour session scheduled.

​And while allies want to focus on his ability to look after his portfolio, critics of the German look set to use the opportunity to question his ethics and controversial views.

'Not Suitable for the Job'

A long controversial figure in Brussels, there was increased opposition to European Commission chief Jean-Claude Juncker's decision to promote Oettinger to the budget portfolio after footage surfaced showing the German making racially charged comments about a visiting Chinese business delegation.

Speaking at an event in Hamburg in October 2016, Oettinger referred to the delegation as having "Schlitzaugen" (slant eyes), which led to numerous politicians and social groups calling for him to be stood down from his portfolio upgrade.

Racist & homophobic slurs. Private flight with a lobbyist. Should #Oettinger be in charge of HR at @EU_Commission? https://t.co/ePSwRkJDlT

​Ahead of Monday evening's European Parliament appearance, a number of civil society groups, including Transparency International and Oxfam, wrote an open letter arguing that Oettinger was not "suitable" to fulfil his role.

"As organizations working towards equality, non-discrimination and campaigning for transparency and ethics, we do not think that Commissioner Oettinger is suitable to oversee Human Resources at the European Commission," the letter read.

"Commissioner Oettinger has made racist, sexist and homophobic remarks on several occasions in the past, most recently at a speech he gave in an official capacity in Hamburg on 26 October."

The Oettinger saga has also exposed stark dividing lines between those who support and those who are against the influential German.

Oettinger has the support of EC chief Juncker and German Chancellor Angela Merkel, who belongs to the same CSU party as her fellow German. However, many leftist groups have been particularly critical of not only Oettinger, but also Juncker's failure to condemn his actions.

After racist "slant eyes" remarks over Chinese, #Oettinger added a slur on black hair, later confirming he made them up on the spot. pic.twitter.com/5xnbTdYaLd

© Flickr / Chris Tolworthy
EU Accused of Watering Down Big Business Tax Avoidance Plans
​Monday's parliament event will contain an "exchange of views," to be co-chaired fellow CSU member Ingeborg Graessle, who says the opportunity should be used to look at the future rather than bring up the past.

"I'd like us to use the opportunity for what it's supposed to do — to get to know the candidate in order to better work with him," she told POLITICO.

"The more we antagonize him, the more difficult it will be afterwards to work together. My worry is that we'll miss that opportunity."