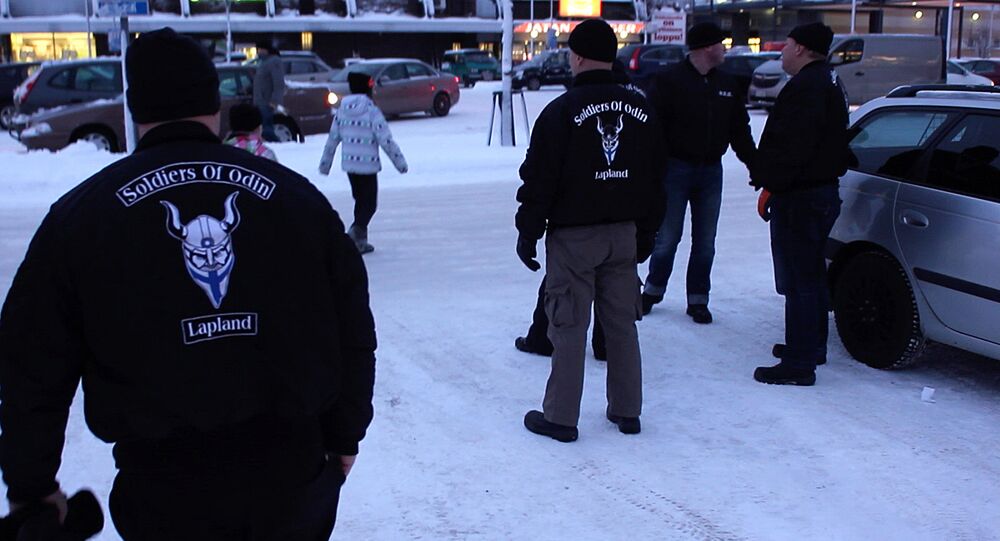 Twelve people have been arrested on suspicion of aggravated assault after a large-scale scuffle between right-wing vigilantes Soldiers of Odin and left-wing activists AFA in the Swedish town of Jönköping.

© AFP 2021 / BERTIL ERICSON
Body Searches and 24/7 Surveillance to Uncover Migrants' True Identity in Sweden
According to Swedish police, up to 50 people were involved in the fight between Soldiers of Odin and left-wing extremist group AFA in central Jönköping, with a number of participants wielding various types of weapons. Twelve people were apprehended as a result of the brawl and later arrested on suspicion of assault, none of them reportedly belonging to Soldiers of Odin. Swedish police have also seized a number of weapons, but would not confirm the exact nature of these.

Whereas none of the individuals involved in the violence have been taken to hospital, Swedish news outlet Fria Tider reported that a 41-year-old vigilante woman was beaten by AFA activists using batons and bars. So far, three victims, all belonging to the Soldiers of Odin, have put in plaintiff's statements, local news outlet Jnytt reported.

Various sources on Swedish social media suggested that the clash may have been prearranged, although police were unable to confirm this, yet confirmed that the left-wing movement in Jönköping has grown, which naturally aggravated the risk of clashes with their antagonists.

"We know they are out there, we know that there are people who do not like them, and we know that confrontations can happen," police officer Lars-Göran Nilseryd told Swedish Radio.

© AFP 2021 / JONATHAN NACKSTRAND
Disgruntled Swedes Drift to the Right to Protest Migration
Nilseryd admitted that Swedish police received information that Soldiers of Odin were going to patrol the town beforehand, yet chose not to intervene. AFA previously published an overview of the right-wing vigilantes' operations.

Soldiers of Odin are an international street patrol group with an anti-immigrant agenda, which was founded in the Finnish city of Kemi in October 2015 amid the international migrant crisis. In the spring of 2016, the Soldiers of Odin established themselves in Sweden. At present, they operate in over 20 Swedish cities and have close to 10,000 supporters on Facebook. By their own claims, the organization is present in 17 nations worldwide.

AFA is a Swedish autonomous network formed in 1993 as part of the international network Antifascist Action. Today, the network consists of several groups of militant activists ideologically rooted in various forms of radical socialism. AFA's overall goal is to through a revolution abolish the current social order in favor of a stateless and classless society.

Cruising for a Bruising: Soldiers of Odin Sweden Get First Results