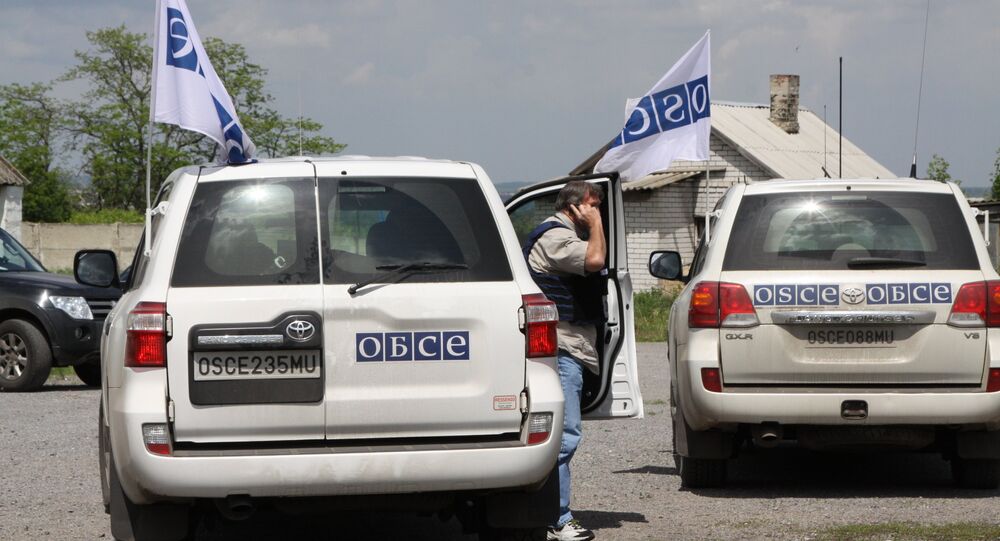 The report by the OSCE’s Special Monitoring Mission (SMM) recorded over 130 explosions in past past two day.

© Sputnik / John Trast
Kiev's Stance on Police Mission Proves Desire to Use Force in Donbas - Russian Diplomat
MOSCOW (Sputnik) — The Organization for Security and Co-operation in Europe (OSCE) detected over 130 explosions in eastern Ukraine in the past two days, a situation report published Friday said.

The report by the OSCE’s Special Monitoring Mission (SMM) recorded ceasefire violations in the Donetsk and Lugansk regions on January 4-5.

"The SMM recorded more ceasefire violations in Donetsk region compared with the previous reporting period, but fewer of these (109 compared with about 140) were explosions. Most violations recorded were in the areas of Svitlodarsk and Debaltseve," the report reads.

"In Luhansk region the SMM recorded fewer ceasefire violations compared with the previous reporting period, including 22 (compared with 48) explosions," the report said.

© Sputnik / Igor Maslov
Donbas Settlement Has No Option Apart From Minsk Accord Implementation - French Ambassador
The SMM said it had followed up on one blast that turned out to be an exploded minibus at a market in the self-proclaimed Donetsk People’s Republic (DPR). Neither the driver nor bystanders were hurt.

Ukraine’s eastern regions have been in turmoil since April 2014 when the Ukrainian government launched a military offensive against militias in Donbass. A ceasefire deal was agreed in February 2015 with the help from Russia, France and Germany. The OSCE was tasked with overseeing the truce and has reported numerous violations on both sides.

Donbass Settlement Has No Option Apart From Minsk Accord Implementation