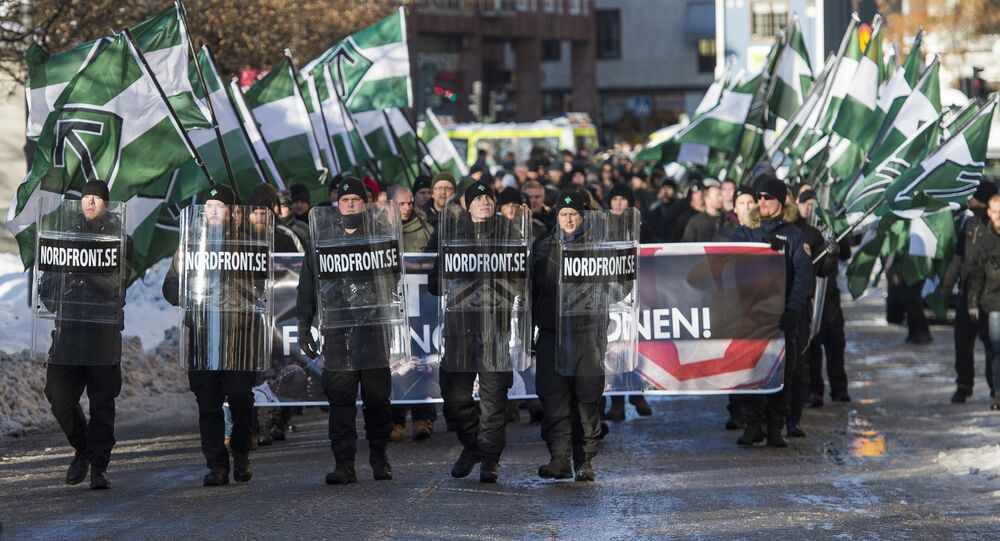 Despite Sweden's pronounced efforts to weed out all forms of far-right extremism and right-wing opposition, homegrown right-wingers seem to be rising in numbers. The increased support for both marginal neo-Nazis and anti-immigrant Swedish Democrats may indicate Swedes' growing disappointment with the current state of affairs.

© AFP 2020 / Emmanuel DUNAND
Hate is the New Tolerance: Feminist Pop Idol Wants Elderly Trump-Voters Dead
The far-right Nordic Resistance Movement (NRM), which in November managed to gather hundreds of supporters in its largest ever demonstration, appears to be mobilizing, according to a new report by Swedish anti-racist group Expo. The study found that 32 percent of the investigated activists previously had no known links to either NRM or other forms of far-right extremism.

"This means that this environment has taken in new individuals. A third of those who were active in 2015 are new recruits," Expo researcher Jonathan Leman told Swedish Radio.

According to Leman's estimation, NRM has attracted new members partly through a recent change in strategy, deciding, among other things, to found a political party. In this connection, the movement seemingly lowered the threshold for becoming an active member, seeking to entice more people.

​In November, an estimated 600 far-right demonstrators and NRM supporters marched through central Stockholm in the organization's biggest march yet. Despite reaching record numbers, the marchers were still easily outnumbered by thousands of anti-racists protesting their very presence.

© Wikipedia / Mestos
Swedish Minority Wants Country's Racist Dark Hours Brought to Light
With branches across the whole Scandinavia, the Nordic Resistance Movement is known for its stalwart opposition to non-white immigration to Scandinavia and reportedly aims at protecting the "indigenous population." It is considered to be a central actor in Scandinavia's white power and neo-Nazi movement. Earlier this year, Expo's annual report found that NRM was growing primarily as a result of other neo-Nazi organizations closing down.

Remarkably, the same growth trend has become manifest even at the legitimate end of the political spectrum. The Sweden Democrats (SD), in effect Sweden's one and only anti-immigrant parliamentary party, reportedly continue to grow, despite coordinated efforts to raise a "cordon sanitaire" through isolating the "troublemakers" with a cross-party alliance. In October, the smear campaign reached new heights as none other than Prime Minister Stefan Löfven labeled SD as "Nazis," yet was forced to retract his statement after lawsuit threats.

© REUTERS / Anders Wiklund/TT News Agency
Against the Odds: Right-Wing Sweden Democrats Carry On Despite Smear Campaign
A recent survey by Sweden's official number-cruncher Statistics Sweden revealed that 17.5 percent of Swedes would vote for SD if elections were held today, whereas "only" 13.1 percent of Swedes actually sympathized with SD. This noteworthy divergence reveals a large number of dissenters who may vote SD, which is often labeled a "one-issue party," out of spite and sheer dissatisfaction with Sweden's present-day politics.

Previously, independent pollsters put SD peak support at as much as 28.8 percent of the vote, effectively making it the largest party in Sweden.