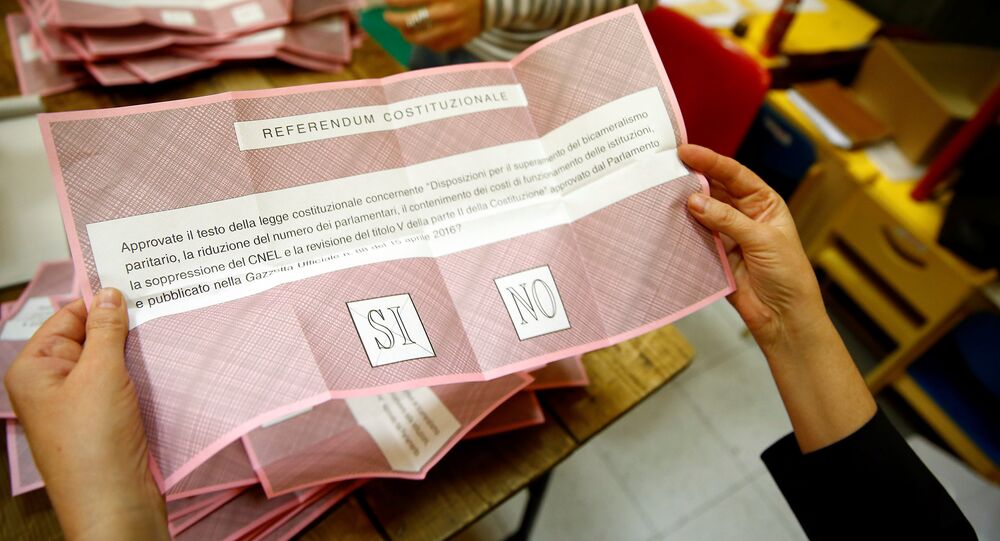 On Sunday, Italians overwhelmingly voted against a constitutional reform proposed by Prime Minister Matteo Renzi to curtail Senate powers in order to speed up the lawmaking process.

According to the country's Interior Ministry, almost 60 percent of voters opposed Mr. Renzi’s proposals, while 40.89 percent supported the proposed reform. On Monday, the prime minister vowed to resign.

© REUTERS / Max Rossi
Italy’s Referendum Another 'Case of Dissatisfaction With Politics as Usual'
“My government ends here today. I tried to slash some parliamentary seats only to lose my own,” Matteo Renzi said when announcing his resignation after the plebiscite with a high turnout of nearly 70 percent.

Proponents of the proposed reform said that it aimed to make the job of governing Italy less complicated and revive the nation's sluggish economy.

The critics claimed the reforms would impact the constitution's checks and balances.

Sputnik Italy asked Alfonso Celotto, a professor of constitutional law at Università Roma Tre, whether the next Italian government will be a purely technocratic one, and who is going to become the new prime minister.

“Since we need a new election law now, I think that it will take us a year before we can vote for a new Cabinet. This means that in the next 12 or 18 months we are going to have an interim government of technocrats, possibly lead by Renzi, before we have new elections in October 2017 or February 2018. The new Cabinet needs a vote of confidence from the Democratic Party, which has 54 percent of parliamentary seats. Renzi’s weakness is strengthening the hand of his opponents within the Democratic Party,” Alfonso Celotto said.

“Italy needs a tax reform, measures to reduce red tape and unemployment, especially among young people, etc. The more serious the new government is about tackling these problems the more trust Italy will enjoy in the world,” Professor Celotto noted.

“The new government will also have to sort out its relations with Brussels, put the country’s finances in order, breath new vigor into the economic sector and reduce our huge debt. We need to act now because this is also about the future of the EU. Before 2004 we used to be pro-EU all, only to turn Euro-skeptics later on. Let’s see how the UK fares after Brexit. If everything goes well, then other countries might want to follow suit,” Alfonso Celotto said.

In an interview with Sputnik Italy, Giulietto Chiesa, an Italian journalist and politician, said that the rejection of the proposed constitutional reform had effectively “killed” a dangerous project to turn Italian democracy into a “twisted brand of monocracy” by putting all power in the hands of one party or one person.

© AP Photo / Andrew Medichini
Italy's Five Star Movement Seeks to Gain Power After Referendum Failure
“The proposed constitutional reform was readily embraced by the EU and the United States, hell-bent on destroying the south European countries’ constitutions they believe are “too socialist” and too democratic, which is allegedly bad for the market. The Italian people overwhelmingly turned down this indecent, neoliberal, proposal,” Giulietto Chiesa emphasized.

He attributed this to the growing anti-EU sentiment across Europe, which has already led to Britain’s decision to exit the bloc and added strength to Marine Le Pen and her rightwing nationalists in France.

“Italy’s readiness to toe Washington’s line in global politics and bow to NATO’s demands to ratchet up tensions with Russia also factored in here with many businessmen, especially in the industrial and farming sectors, hard hit by anti-Russian sanctions, saying a flat no to the proposed reform,” Giulietto Chiesa noted.

He added that Italy was headed for a new political course and preliminary elections to be held in line with a new election law, but not the one Matteo Renzi had pitched in its proposed reform.

“Barring any last-minute hurdles, President Sergio Mattarella will appoint the head for a new ‘technocratic” government  to focus on drawing up a new elections law,” Chiesa said, adding that cobbling together such a Cabinet will not be easy.

“The Democratic Party has emerged badly bruised from this confrontation with the whole country. The right wingers are represented by Matteo Salvini and his Northern League, Berlusconi is out and the position of the Five Star Movement of Beppo Grillo is hard to gauge. Both these parties call for mending ties with Russia, lifting the anti-Russian sanctions, and criticize the euro and the EU,” Giulietto Chiesa said.

“One thing is clear – the majority of Italians refuse to drink from the global bankers’ poisoned swamp,” he said in conclusion.