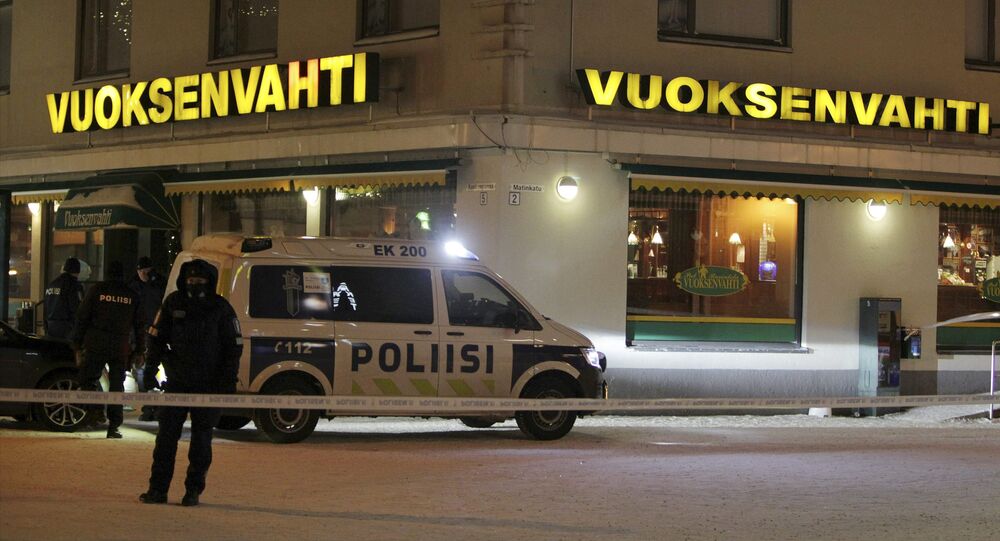 This weekend, the chairwoman of the City Council and two local journalists were shot dead in the Finnish town of Imatra near the Russian border. According to preliminary data, the shooter chose his victims at random. After the massacre, he surrendered himself to the police. This case deviates from the typical ones in seven key points.

© AFP 2021 / PER WISSING
Finnish Security Police Director Reveals Finnish Jihadists 'Reach High Positions in Daesh'
Around midnight, December 3, the 23-year-old culprit committed triple murder in cold blood on a crowded pedestrian street in the center of Imatra amid the holiday season. The murderer got out of the car and shot the three women point blank near the entrance to a restaurant. The weapon proved later to be legal, yet it remains unclear how the culprit had gotten hold of it, Finnish daily Hufvudstadsbladet reported.

Police arrived quickly to the scene, as the closest patrol was just 300 meters away from where the crime occurred. The killer was waiting in the car and surrendered without resistance when approached by law enforcement officers.

The victims, who were not known to the killer and were seemingly chosen randomly, were three local women born in 1963, 1964 and 1980, served as chairwoman of the City Council and journalists at local newspapers Uutisvuoksi and Etelä-Saimaa respectively.

​Remarkably, the 23-year-old killer is no stranger to local police. In March 2013, he stabbed another man with a knife, subsequently confessing aggravated assault, but denying attempted manslaughter. Since the injuries were life-threatening, the man was sentenced to three years and two months in prison. A mental survey, which the man underwent in connection with the trial, showed that he was sane and perfectly understood the consequences of his actions. The man was also convicted of drunken driving.

© CC0
Dying With Dignity: Petition for 'Happy Departure' Gains Momentum in Finland
According to Finnish national broadcaster Yle, there are seven peculiarities to the murder. Firstly, women unknown to the offender only constitute 1 percent of homicide victims in Finland. Secondly, politicians and journalist are seldom murdered in Finland, and there is no indication that this case could be political. Thirdly, all the victims were female, as opposed to nearly 70 percent of homicides in Finland, where the victims are male. Fourthly, triple murders are extremely rare in Finland. In 80 percent of the cases, single murders are investigated. Fifthly, 72 percent of the Finnish murders take place in private apartments, whereas the shooting in Imatra happened in the center of a pedestrian zone. Sixthly, the perpetrator used a hunting rifle, which he stored in the trunk of his car. The majority of murders in Finland are carried out with cold steel, whereas firearms only account for 17 percent of murders. Seventhly, 78 percent of homicides in Finland are committed under the influence of alcohol, whereas the Imatra murderer was sober.

BREAKING: Local Mayor and 2 journalist were killed last night by a sniper in #Imatra #Finnland, shooter was arrested pic.twitter.com/0MuNZCgSBu

​Overall, Finland has a very low intentional homicide rate. Whereas gang violence is almost non-existent, Finland is notorious for random school massacres and street shootings like the 2012 Hyvinkää shooting or the Kauhajoki school shooting.