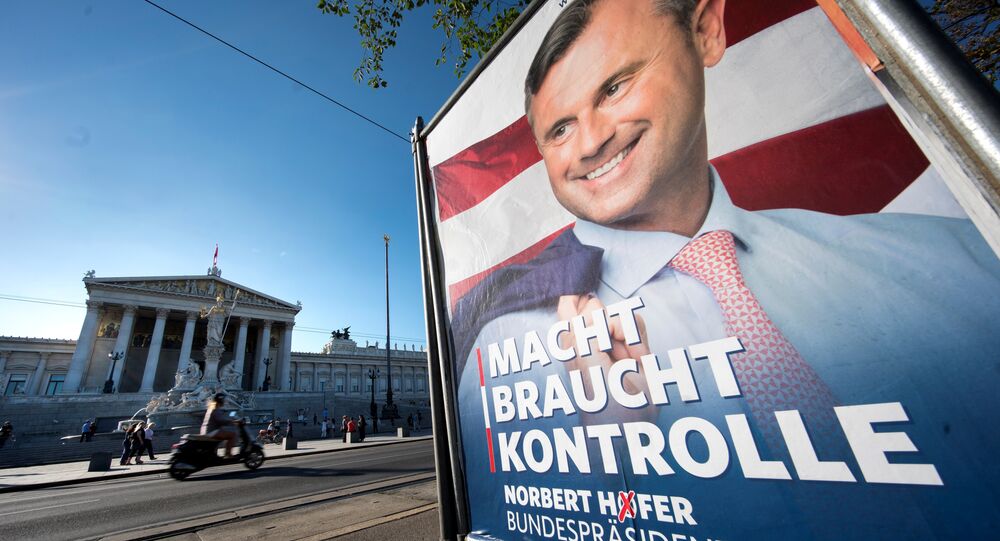 The work that Austria's Freedom Party (FPO) candidate for presidency Norbert Hofer has been doing in Parliament won approval from all the parties and proved his strong credentials for being the next Austrian president, chairman of the Austrian People´s Party (OVP) parliamentary group Reinhold Lopatka told Sputnik on Thursday.

© REUTERS / Leonhard Foeger
Austria's Hofer Proposes New Central European Alliance to Stop Paris & Berlin's EU Hegemony
MOSCOW (Sputnik) — On Sunday, Austria will hold a presidential election rerun after the Constitutional Court in July annulled due to irregularities in the procedure the second election round victory of Hofer's rival Alexander Van der Bellen, who is running as independent but is backed by the Green Party. Now the two candidates run neck and neck, though polls give Hofer a slight advantage.

"In my opinion Norbert Hofer, as he is one of the Presidents of Parliament, has shown he is suitable for being President of Austria. All parties in Parliament judge he did a good work here… I think he is the favorite for this election," Lopatka said praising Hofer's performance as the Third President of the National Council, the lower chamber of the Austrian Parliament with broader powers.

"At last the candidate, who will mobilize his voters best, will win the election," Lopatka added.

Hofer is well-known for his anti-migrants and anti-EU stance. He promised he would call a referendum on EU membership if Turkey joined the 28-member bloc or if Brussels tried to centralize it powers. Van der Bellen, in contrast, has been campaigning on a pro-EU platform, calling for the solidarity between member states, as "otherwise we won't be able to assert ourselves in the face of Russia or the United States".

© REUTERS / Heinz-Peter Bader
Hofer to Austria's Rescue? Presidential Candidate Has Plan to End Migrant Crisis
While the majority of the ruling Social Democrats already endorsed Van der Bellen's short-lived victory back in May and now call to vote for him, OVP is divided over its choice. While Lopatka as well as OVP top-politicians like Interior Minister Wolfgang Sobotka and Foreign Affairs Minister Sebastian Kurz are supportive of FPO candidate, OVP party Chairman Reinhold Mitterlehner recently confessed he would choose Van der Bellen "with some probability."

Support extended by the ruling Social Democratic Party of Austria (SPO) to presidential candidate Alexander Van der Bellen may undermine his chances to become the country's next president as SPO is unpopular with voters in Vienna, Lopatka added.

"In Vienna the SPO, who supports Van der Bellen, has a dispute about its future and doesn't solve the serious social problems. The anger of the people in Vienna is going to affect Alexander Van der Bellen. I think, Hofer will win," Lopatka, a former State Secretary for European and International Affairs, suggested.

One of the main concerns in Austria and Vienna in particular is high surge of crimes committed by migrants following the arrival of some 120,000 refugees from the Middle East, Africa and Asia since 2015. According to the latest figures from the Interior Ministry, during the first six months of the year, there was a 38.8-percent rise in criminal complaints against migrants in the Austrian capital. FPO with its anti-migrants stance has tapped into local residents' worries.

Lopatka added that in the situation when the voters decide not only depending on candidate's ideas, but on their personalities and charisma, Van der Bellen seems disadvantageous compared against his rival.

"I do not think presidency is a question of age, but Alexander Van der Bellen sometimes seems to be a bit tired," Lopatka added.

In May, Hofer narrowly failed to be elected president in the second round after being beaten by Van der Bellen by just 31,000 votes. The FPO managed to have the election annulled in July by the Constitutional Court because of procedural irregularities. Now the two candidates run neck and neck, though polls give Hofer a slight advantage.