The two front runners for French The Republicans party’s nomination to stand at the spring 2017 presidential elections – former prime-ministers Alain Juppe and Francois Fillon – will face each other in the runoff on Sunday, with the winner being most definitely projected as a Fifth Republic's next president.

Francois Fillon has become a classical example of how a least favorite candidate can turn into a front runner. Though well-known to wide French public through his five-year premiership under ex-president Nicolas Sarkozy, The Republicans nominee Fillon was given just about 8 percent by most polls back in August, far behind Bruno Le Maire, then third man in the race, who this week has extended his support for Fillon.

© Sputnik / Alexei Druzhinin
'Fillon Would Use France's Diplomatic Authority to Try to Reach Europe-Russia Agreement'
First suspicions that Fillon, dubbed once by Le Monde daily "Mr. Nobody", might become a surprise of the Republican primaries emerged only one week prior to the first round held last Sunday, when he started unprecedented sky-rocketing in the most polls with some pollsters even giving him a slight advantage over his former boss Sarkozy, then the second popular contender for the party ticket after former prime-minister Alain Juppe.

Fillon topped all expectations: in the first round of primaries he not only eliminated Sarkozy, but ended with a far better result than Juppe, who long was thought to be the absolute front runner (44, 2 percent of votes of right and center electorate went to Fillon versus just 28, 6 percent for Juppe).

During the TV debates hold on Thursday evening, Fillon confirmed his leading position. According to Elabe pollster, 57 percent of French general public who watched the debates found Fillon more convincing than Juppe with this number among voters of right and center-right being even higher – 71 percent.

FROM COMMON GROUND TO DIFFERENCES

While at the first stage of campaign almost all the candidates seemed to have very similar views and programs with the battle focusing mostly on their personalities, charisma and style, the final stage exposed numerous differences between visions of the two remaining nominees.

The most evident difference between the two presidential hopefuls is their view on Islam. While Fillon, the author of book entitled Beating Islamic totalitarianism, numerous times said that France was no way a multicultural country and promised to introduce administrative controls on Islam in France, including dissolving the Salafi movement and banning preaching in Arabic, Juppe stressed that "the identity of France is its diversity" and that the country was enriched by different religions and political ideas.

Fillon supported a law to ban Muslim full-body swimsuits, dubbed burkini, from French beaches. Juppe once told Le Monde that major candidates were inciting so much ethnic hatred that France risked sliding into civil war, expressing his concerns over the anti-immigrant and anti-Muslim hysteria dominating the election campaign.

© REUTERS / Thomas Samson
France's Fillon Can Unite Right, Take Away Votes From Le Pen, Lawmaker Says
Fillon, a devout Catholic and a father of five, has made a focus on family values the central part of his election campaign. He promised to prevent the same-sex couples from child’s adoption, outlining that the family was "certainly not a place for dangerous social experimentation". Juppe argued that even homosexuals have a right to marry civilly, indicating his support for the so-called Taubira law, that gave legal status to same-sex marriages, that was passed in 2013 despite mass protests against it.

In October, the organization Le Manif pour tous, founded in 2013 mostly to oppose same-sex marriages, staged another protests in defense of traditional family, calling on candidates to support it.

"Indeed, thanks to our great mobilization which mobilized millions of French people, we were able to put the Family in front of the stage," the team of Le Manif pour tous told Sputnik on Friday.

Though this group is non-partisan organization and doesn't support any of the candidates, Le Manif pour tous admitted to Sputnik that another movement closely associated with it — Sens Commun — greatly helped in drumming support for Fillon among Catholic voters. Sens Commun, which was set up in late 2013 with the stated intent of influencing party policy and weighing on the primary to designate a conservative candidate for the 2017 presidential election, announced its support for Fillon on September 1, well before he became a clear favorite.

Fillon, an admirer of the United Kingdom's late leader Margaret Thatcher (which prompted the leftist daily Liberation to depict Fillon as Thatcher in a photo-shoped image on its front page this Tuesday), suggests, like many of his party fellow, to scrap the 35 hour week, long secured by the Socialist-led governments. Fillon’s economic plan for France also includes making savings of €110 billion over five years by raising the retirement age to 65, cutting 500,000 civil servant positions and making €40 million tax cuts for companies. He also wants to reduce the power of the trade unions.

© Sputnik / Michael Alaeddin
Trump, Fillon Could Have Prevented Syrian Crisis as US, French Presidents
While Juppe generally agrees on the necessity of pension reform and government spending reductions, he is sticking to a more mild approach — for instance, reducing taxes by €35 billion, cutting up to 300,000 civil servants positions and choosing a differentiated corporate tax rate for large companies (30 percent) and small-and-medium enterprises (24 percent), whilst Fillon wants a single rate of 25 percent. Though supportive of the abolition of 35 hours working week, Juppe insists it should be a return to the 39 hours, that existed in the past; Fillon insists that "the law will fix the maximum duration of the weekly work according to the European standard," or 42 or 48 hours.

Juppe calls his rival economic program unrealistic and "a very big social brutality". Fillon argues that France economic situation would only deteriorate if not to take radical measures and accuses Juppe in "hesitation to act strongly." 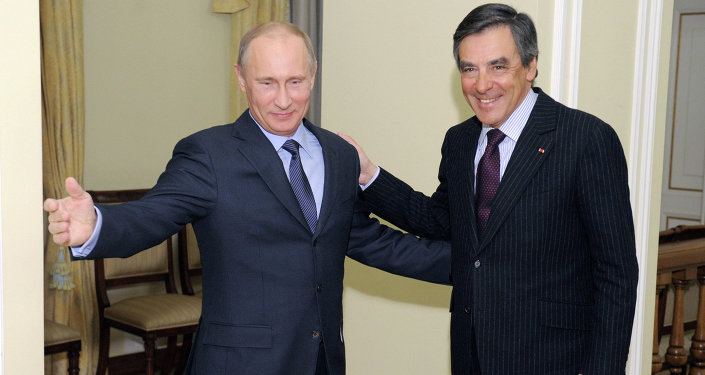 © Sputnik / Alexei Druzhinin
French Presidential Hopeful Fracois Fillon Wants to Fight Islamism With Russia
Fillon earned a reputation of pro-Kremlin supporter when three years ago at one symposium in Russia, sitting next to Russian President Vladimir Putin, he criticized French President Francois Hollande's policy as too Atlantist. During his campaign Fillon reiterated his aspirations for normalization of ties with Moscow, arguing that France should talk to Putin "without disregarding our differences but without provocations". He also criticized France’s current policy with regard to Syria and hasn't ruled out working with Iran and Syrian President Bashar al-Assad, arguing that France should consider all partners to fight the Islamic State.

Juppe has been consistently opposed to the Iranian Shiites and supported the alliance with the Sunnites, Saudi Arabia and Qatar. Just recently he criticized Fillon's attitude toward Russia by recommending him not to "force on vodka" in a clear hint to his close relations with Putin. But closer to the final primaries he showed himself a bit milder critic of Russia. Speaking on Friday to BFMTV broadcaster, the current mayor of Bordeaux stated that France and Russia should communicate instead of being rivals though Paris has to reaffirm its position that Crimean reunification with Russia was a violation of the international law.

WINNER TAKES IT ALL 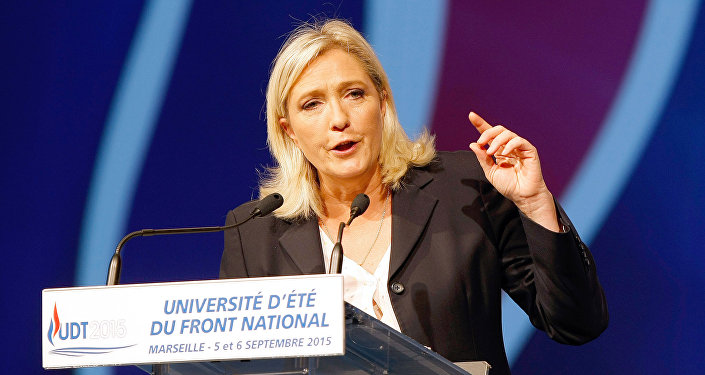 © AP Photo / Claude Paris
In Trump's Footsteps? Marine Le Pen Chances to Become French President Rising
In the light of current unpopularity of the ruling Socialist Party any Republican candidate — be it Fillon or Juppe — is clearly projected to become a winner of the second round of presidential election as there is a strong believe that French would finally unite just to avoid the entering into Elysee Palace of the leader of far-right National Front (FN) Marine Le Pen.

After the unexpected victory of Fillon at the first primaries, entourage of Le Pen, now France's most popular politician with rating of up to 40 percent, openly admitted that the party hadn't been preparing for a fight with him. Back in late August the head of the press-office of FN Alain Vizier told Sputnik that the main battle would be between Le Pen and Juppe. Fillon wasn't even mentioned as a possible rival.

"Le Pen would very much prefer to contest against Allan Juppe, because she portrays him as a man of the past because of his age and his lesser conservatism on the social issues. But she also has an opportunity if Fillon wins. Marine Le Pen will probably try to portray him as a candidate who wants to destroy the French social state and stands against the interests of the working class and people," Jean-Yves Camus, a researcher with the think-tank IRIS and an expert on the far right in France, told Sputnik.

Nevertheless, chances are high that in the end Le Pen would most probably be subjected to well-known in France "cordon sanitaire" when voters and candidates from different political spectrum unite just to avoid far-right victory. The brightest example of such voters' behavior was last seen in 2002, when French en messe endorsed Jacques Chirac to stop FN ex-leader Jean-Marie Le Pen, Marine's father.

"She [Marine Le Pen] has a good chance to stand in ballots, but when it comes to winning the elections you need to have a majority and be able to set a consensus which Francois Fillion is certainly much more able to achieve," Camus said.

In expert's view, many left voters would find it hard to vote for Fillon in May "as he is too much a conservative," but the majority would have no other choice but to extend their support to the former prime minister to bar FN leader.