London police officers detained 33 people at the annual Million Mask March that is held in the city, local media reported. 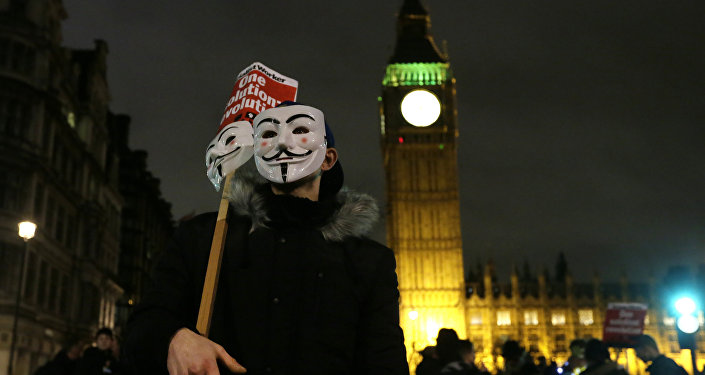 © AP Photo / Tim Ireland
Million Mask March Floods the Streets of London
MOSCOW (Sputnik) — On Saturday, thousands of protesters, many of them wearing Guy Fawkes masks participated in the anti-capitalist march in the central part of the UK capital.

The BBC broadcaster reported on Saturday that police detained 33 people for a number of crimes, including criminal damage, public order and obstruction offenses as well as carrying drugs and weapons.

The media outlet reported several protesters climbed the Nelson's column at Trafalgar Square and chanted slogans, while others ignited fireworks, when the protesters marched near Westminster Abbey.

According to the BBC, the similar march in 2015 resulted in detention of 50 people, while four officers and six police horses were injured.

The Million Mask demonstration is an annual event, which has been held across the globe since 2012.