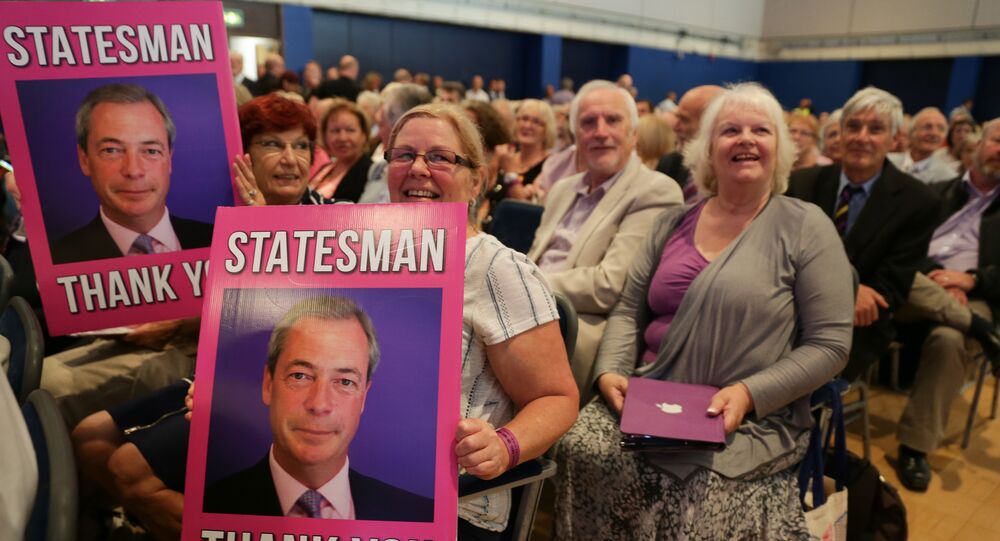 The UK Independence Party (UKIP), have had their ups and downs. After winning the EU referendum vote and persuading some Brits to vote for Brexit, UKIP were on an absolute high. But with party divisions and infighting they seem to be going through a bit of a difficult time.

However for the first time, YouGov have released research on the political party that shows some surprising results on what UKIP members looks like and how they think about other political parties, as well as the future of their own.

In a first for any UK pollster, YouGov profiles the UKIP party membership https://t.co/22kY68Pby3 #Marr pic.twitter.com/KqMGUSa63O

The poll reveals that UKIP politicians and members are composed of former Conservative voters.

When looking at how UKIP members had voted in previous general elections, 66 percent of them had voted Conservative, whereas just 24 percent had gone for Labour.

In fact, UKIP have always had a history of attracting the disenfranchised Conservative voter, as was the case with Mark Reckless, the former Tory MP who defected from his party and joined UKIP in 2014.

Looking at whether the party is right-wing or left-wing, it is no shock that UKIP members sway more to the right then they do to the left. With 69 percent of members considering themselves right of the center and only 10 percent classing themselves as left of center.

69% of UKIP members identify as being right wing. They want the next leader to keep the party on the same track https://t.co/22kY68Pby3 pic.twitter.com/R3l2dWVY7B

However, one of the most surprising results of all comes from the fact that UKIP are actively seeking to engage with the Labour electorate.

ICYMI, yesterday YouGov released the first ever survey of the UKIP party membership. Here's what we found: https://t.co/22kY68Pby3 pic.twitter.com/vdSgZC6r0Q

Nearly three quarters of UKIP members think that future victories in general elections means that they will need to start campaigns that engage and actively target Labour voters. For UKIP supporters the reason is obvious — according to YouGov, the party feels that they have reached saturation when it comes to the number of Conservative voters that they can attract, therefore reaching the Labour voter is the next logical step forward.

Immigration and Brexit are the country's most important issues, according to the majority of UKIP members https://t.co/22kY68Pby3 pic.twitter.com/CqN1wJWVNu

The disenfranchised Labour voter offers far more fruitful and fertile ground for the UKIP party — something they can no longer ignore. However this does not come without challenges, some UKIP members believe that keeping the party "pure" is the most important issue.

In addition to this, UKIP members believe that the party is no longer focused on just one issue, which until the Brexit referendum has been about leaving the EU. In fact, they believe their views and issues have expanded, however what these additional views are have yet to be explained.

UKIP is not a single issue party to its members — they do not want to disband once Brexit has been achieved https://t.co/22kY68Pby3 pic.twitter.com/pEIa3GAYYg

Some expected UKIP to split after the EU vote, but it looks like they are here to stay. Former UKIP leader Nigel Farage, in an interview before the EU referendum vote, said that the party had an important role to play:

© REUTERS / Suzanne Plunkett
Britain's UKIP in 'Death Spiral' as Party Descends Into Chaos After Brexit
"I think whatever happens tomorrow, I think that UKIP has an important role to play, firstly in the European Parliament… and I do think within this country posing a direct electoral threat in case there was any backtracking."

The YouGov study also shows the absolute confidence that members have in their party. The majority believe that UKIP is here to stay, with 78 percent saying they are not going away.

Also when it comes to the other parties, 87 percent of UKIP members think that the Conservative party is also here to say, whereas only 39 percent believe that Labour will be around in 10 years time. 21 percent have faith in the Green Party's existence and only 13 percent think that the Liberal Democrats will have a strong membership in the future.

Despite the recent troubles that have shaken up UKIP to its core, its members are confident in the future strength of the party.