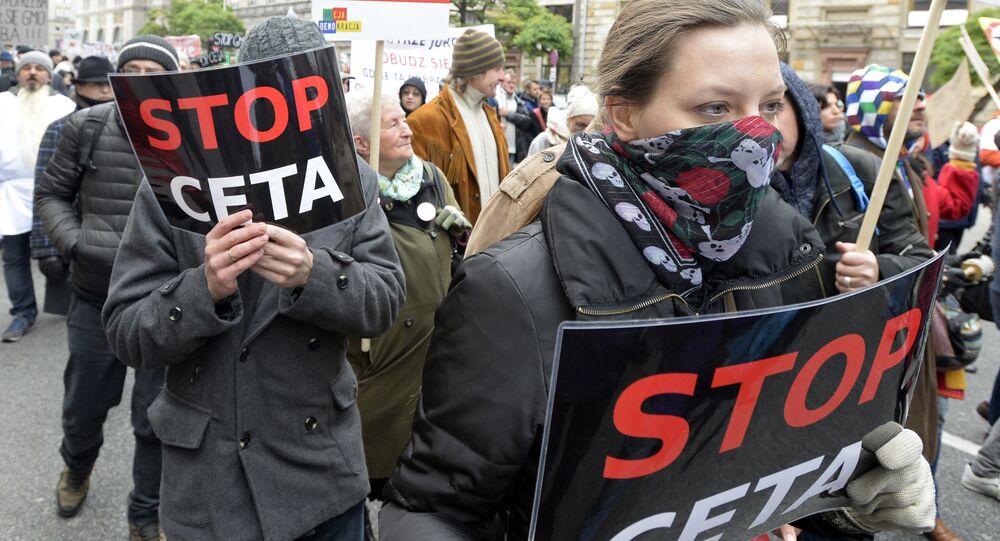 Some 7,000 Protest Against CETA, TTIP Trade Deals in Warsaw

Around 7,000 people are taking part in the protest against the Transatlantic Trade and Investment Partnership (TTIP) and the Comprehensive Economic and Trade Agreement (CETA) with Canada in Warsaw on Saturday.

© REUTERS / Denis Balibouse
TTIP Unlikely to Be Concluded Before US Elections - European Trade Union Confederation
WARSAW (Sputnik) – The protest organized by the local NGO and supported by several trade unions and parties, began at 1 p.m. local time (11:00 GMT) by the Agriculture Ministry building and then marched to the office of prime minister.

Activists are holding Polish flags and posters saying "TTIP and CETA are toxic agreements", "Stop corporate dictatorship" and others.

The TTIP, negotiations on which have been ongoing since 2013, seeks to establish a free trade zone between the two sides of Atlantic. Since the start of the talks, the deal has drawn severe criticism for the lack of transparency. Its opponents also express concern over the tremendous power it would potentially give to international corporations and the fact that it could seriously violate ecological standards.

French President Hits out at US 'Excess of Power,' Threatens to Veto TTIP

Four Reasons Why TTIP Agreement is 'Unacceptable' for Europe