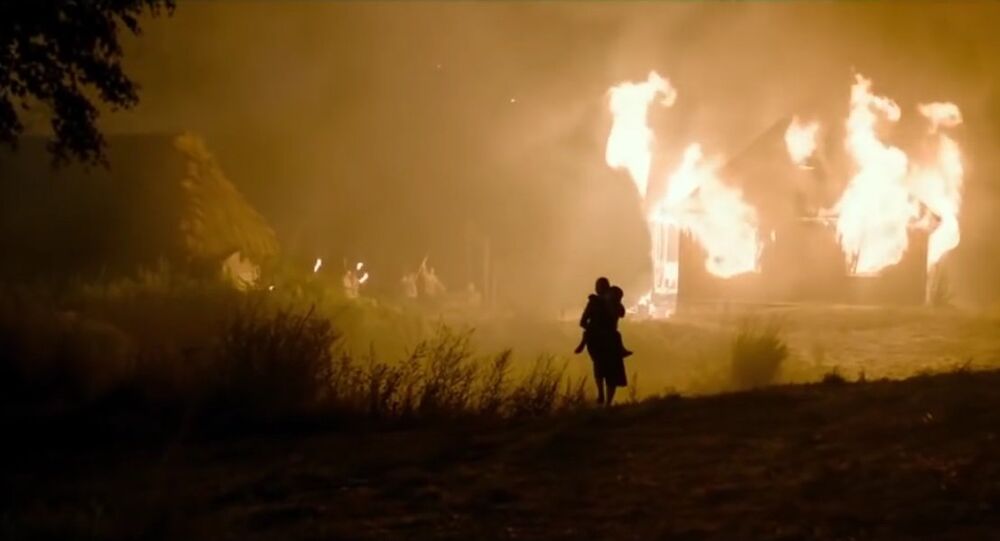 On Friday, Poles flocked to theaters to watch Volyn, a new historical drama by director Wojciech Smarzowski which depicts the atrocities committed by Ukrainian nationalists during WWII. Even before it was released, Ukrainian commentators blasted the film. Some now fear that movie could help ruin Polish-Ukrainian relations.

During the Second World War, at the same time that millions of Ukrainians fought Nazi Germany in the ranks of the Red Army, several hundred thousand nationalists from groups including the Organization of Ukrainian Nationalists (OUN) and the Ukrainian Insurgent Army (UPA) collaborated with Nazi forces in their occupation of what had been Polish and Soviet Ukrainian territory. In addition to a series of murderous campaigns against Jews, Gypsies, Soviet POWs and anti-fascist Ukrainians, UPA nationalists conducted a mass campaign of ethnic cleansing targeting the Polish minority in western Ukraine.

© Sputnik / Pavel Palamarchuk
Nationalism Disguised as Patriotism: Stepan Bandera's Legacy Looms Over Poland
According to historians, the campaign resulted in the deaths of between 80,000 and 120,000 people, predominantly women and children, between 1943 and 1945.

In February 2014, Ukraine's government was overthrown in a coup d'état. The new authorities have since actively sought to rebrand organizations like OUN and UPA as heroic movements fighting for Ukraine's independence. Kiev has sponsored monuments to UPA leader Stepan Bandera, renamed roads, funded textbooks and documentaries and supported a series of other projects to try and clean up the war-era nationalists' image.

The campaign has been met with hostility from many Poles, who remain mindful of the nationalists' WWII-era crimes, and don't want them to be forgotten. This summer, the Polish Senate passed a law classifying the massacre of Poles in Volyn and Eastern Galicia as genocide. Before and since, people have staged protest marches and even put up monuments commemorating the victims of the massacre.

On Friday, Polish director Wojciech Smarzowski, widely considered 'the king of modern Polish cinema', made his own contribution to the Polish-Ukrainian debate with his new film Volyn, which dramatically depicts the UPA's crimes. The opening showings of the film sold out across the country, attracting considerable interest among young people.

In the run-up to the film's release, Smarzowski promised that it would be an honest portrayal of events "from the Polish perspective," adding that the subject was a "personal, difficult one" for him.

Unfortunately, ever since filming began, the film was subjected to more and more intense criticism from Ukrainian media. Ukrainian Radio Liberty columnist Andriy Lyubka even warned that the movie would "push Polish-Ukrainian relations back a decade."

For its part, EU-sponsored Ukrainian newspaper Evropeyskaya Pravda worried the film and its historical subject matter would increase tensions between modern-day Poland and Ukraine, noting that "comments posted on Polish forums do not leave any doubts: many Poles are not ready to separate what happened 73 years ago from today, and are urging their government to form its policy toward Kiev guided by an assessment of the past."

© Photo : Youtube / 28 Панфиловцев
Panfilov's 28 Guardsmen and the Revival of Great Russian Cinema
Furthermore, the paper suggested, "given the fatigue towards post-Maidan Ukraine in Polish society, and rising levels of xenophobia against the background of the EU migrant crisis, Smarzowski's film, as an artistic product designed for a wide audience, really can change a lot in Polish-Ukrainian relations."

Accordingly, some Ukrainian observers are panicking that Warsaw's initial spurt of support for Maidan, at the diplomatic level in both Poland and by Polish officials in the EU, now threatens to run out of juice. The countries' once-warm diplomatic relations are gradually cooling amid Kiev's efforts to glorify wartime nationalists over the last two and a half years; they may chill even further as ordinary Poles absorb the messages in Smarzowski's film.

Unfortunately, Ukrainian media and politicians attempting to portray the Polish version of the massacre as 'exaggerated', 'overblown' and 'a sign of xenophobia against Ukrainians', have nowhere to retreat, since acknowledging the veracity of the Polish accusations would mean tarnishing the dubious 'heroes' of contemporary Ukraine's national narrative.

Sure enough, just days after its release, the film has already found a place in Polish political discourse, with the populist right wing civil movement Kukiz'15 making an official appeal to the Foreign Ministry to distribute the film in Ukraine to promote understanding of Poles' attitudes toward the country's wartime nationalists.