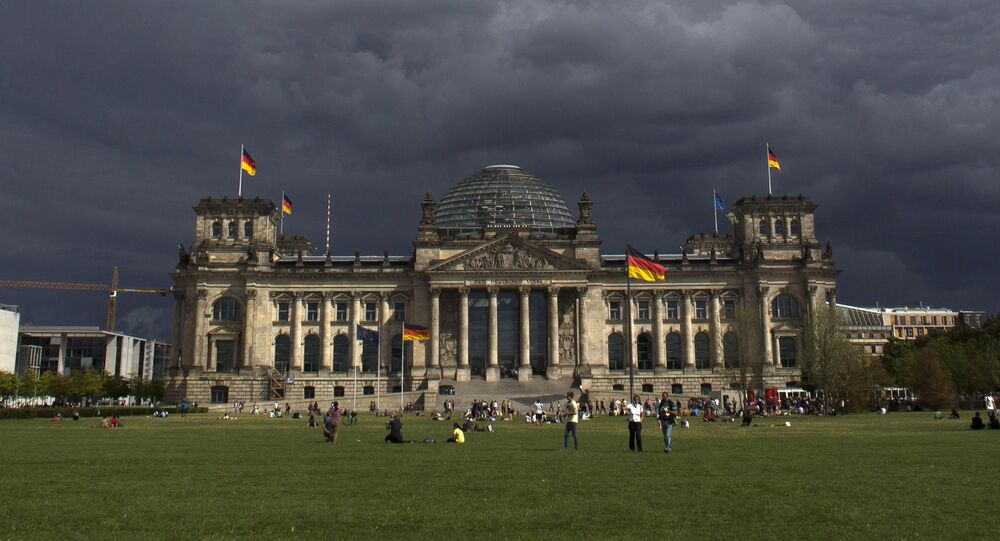 Rumble in the Bundestag: German Parties Can't Agree on Sanctions Against Russia

Germany politicians and lawmakers are embroiled in a spat over the approach Berlin should take in relation to Moscow over the crisis in Syria, Deutsche Welle reports. While the Christian Democratic Union and the Greens push for a hard line, including sanctions, the Social Democrats call for dialogue.

Speaking to the German Sunday newspaper Welt am Sonntag, Social Democratic Party (SPD) deputy chairman Thorsten Schafer-Gumbel suggested that what Berlin needs in this period of international tensions is dialogue with Moscow.

"Patient diplomacy, change through rapprochement and channels of negotiations that are consistently open – these are the tools that will pave the way to peace and ensure détente," Schafer-Gumbel stressed.

Speaking to the Sunday paper, CDU foreign policy expert Roderich Kiesewetter suggested that he was "anxious" over the idea that "more and more representatives of the SPD advocate distancing ourselves equally both from Moscow and from Washington." After all, he added, Russia "is just trying to divide the West, especially Europe."

© Sputnik / Dmitriy Vinogradov
Definition of Insanity: US & Europe Preparing Sanctions Against Russia for Fighting Terrorism in Syria
"We really do need to clarify the foundation of our common values with the US after the conflict over the NSA, but we mustn't allow ourselves to be bought by the Russian strategy," Kiesewetter added, referring to the scandal revealed last year that the US National Security Agency had been engaged in spying on the German government for decades.

In turn, Green Party co-chair Katrin Goring-Eckardt told Bild explicitly that Russia is engaged in "barbaric acts in Syria," and called on the German government to introduce new sanctions against Moscow over its alleged "war crimes."

German politicians have struggled to come to a unified position over which policies to pursue with respect to Russia for some time now, with opinions fraying regarding the sanctions imposed in the wake of the 2014 Ukraine crisis, which has since resulted in tens of billions of euros in losses for German companies, and proven to be equally devastating for the country's agricultural sector.

© AFP 2021 / Adam BERRY
Ineffective Anti-Russian Sanctions German Weapon of Choice Despite 'No Benefit'
Last week, amid increasing tensions between Moscow on the one hand and the US and its European allies on the other over Syria, Norbert Roettgen, chairman of the Bundestag's Foreign Affairs Committee, told Seuddeutsche Zeitung that he was pressing for new sanctions against Russia over its role in the Syrian crisis.

German Foreign Minister and SPD leader Frank-Walter Steinmeier, meanwhile, has reiterated that he is against new sanctions, suggesting that such measures would be 'meaningless'. Gernot Erler, Berlin's official representative on inter-societal cooperation between Germany and the former Soviet republics, including Russia, has also stressed that only dialogue, not more sanctions, can help resolve the diplomatic crisis.

Ineffective Anti-Russian Sanctions German Weapon of Choice Despite 'No Benefit'