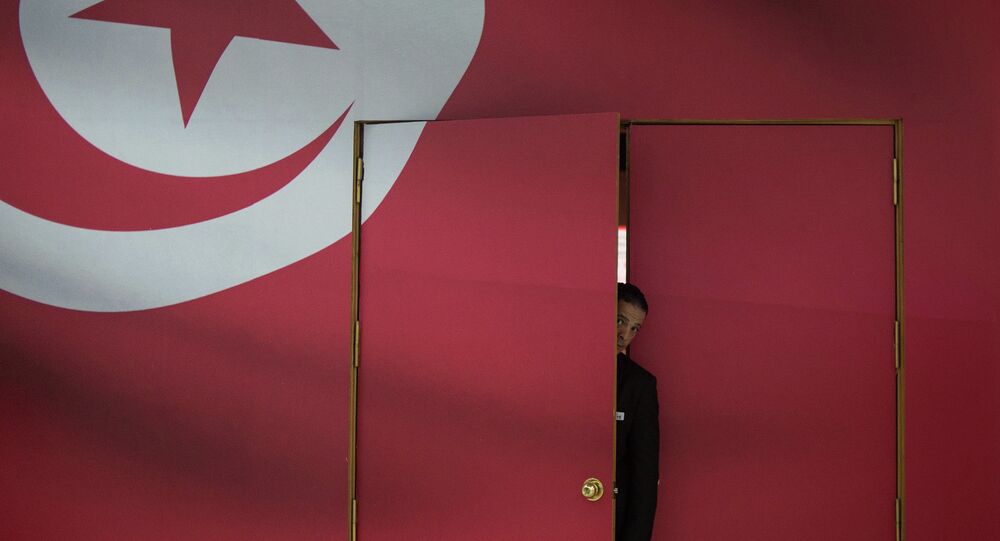 Angela Merkel has urged the EU to make new migration deals with North African countries, but Tunisia already has one which it isn't happy with, Ramy Salhi of the human rights NGO "EuroMed Rights" told Sputnik Francais.

© AFP 2020 / DPA/Bernd Von Jutrczenka
On One Year Anniversary of 'We Can Handle This,' Merkel Admits Migrant Mistakes
Europe needs to reach refugee agreements with North African countries similar to the one Brussels agreed with Ankara in March, in order to tackle illegal migration, German Chancellor Angela Merkel said on Monday.

"We must and want to make every effort to ensure that a situation like we had last summer does not repeat itself," Merkel said, Germany's ZDF Heute news program reported.

Merkel referred to the dangerous sea crossings that illegal migrants make: last week 170 people drowned off the Egyptian coast when a boat carrying more than 400 migrants capsized on its way across the Mediterranean Sea.

Merkel has previously called Africa, with a population of 1.2 billion people, a "central problem" for migration, and this time promised more development aid to African countries.

"It is important to give African countries opportunities," because economic development is key to ending illegal migration, Merkel said.

The German Chancellor said that agreements such as the EU-Turkey refugee deal made in March is key to combatting illegal migration, and the principle should be extended to North African countries.

"It (the EU-Turkey agreement) says clearly: I have no chance of migrating illegally. These are mechanisms which we also need to introduce regarding other countries, for example Egypt or Tunisia," Merkel announced.

However, Tunisia already has a much-criticized migration agreement with the EU. It was agreed in March 2014, but it hasn't led to any progress on the issue, Ramy Salhi of the human rights HGO "EuroMed Rights" told Sputnik Francais.

Called a "Mobility Partnership," the agreement "aims to facilitate the movement of people between the EU and Tunisia and to promote a common and responsible management of existing migratory flows," EU Commissioner for Home Affairs Cecilia Malmstrom said.

© REUTERS / Giorgos Moutafis
'Send Them Back to Libya': EU Deputies Propose New Solution to Illegal Migration
The deal is supposed to include simplified rules for granting visas, and EU support to Tunisia for protecting refugees and asylum-seekers.

However, Salhi explained that the controversial deal has not lived up to Tunisian expectations of support in the effective prevention of illegal migration.

Failed asylum seekers and migrants returned to Tunisia still suffer human rights abuses because of a lack of funds and adequate legislation to protect the rights of migrants. Like Ankara, Tunis also complains that the EU's promised financial support is not forthcoming.

"Unfortunately, Tunisia doesn't have laws about the admission of migrants and asylum seekers. A relevant bill is under discussion, and we are urging the Tunisian authorities to pass some legislation on this matter," Salhi said.

Salhi complained that "there hasn't been any progress" in the control of migration between the EU and Tunisia. He said that despite the EU's stated commitment to human rights, Tunisians are starting to believe that the EU is unwilling to make the necessary financial contribution.

"Tunisians, both at the official level and in civil society, are disappointed with the transition process. Despite the declarations of love for Tunisia, the Tunisian revolution and the Tunisian people, the state treasury is still empty and the insignificant loans that Europe offers aren't enough to talk the politics of development which could restrict migratory flows and give Tunisia the chance to make a breakthrough," Salhi said.

The EU signed its refugee deal with Turkey in March, according to which the EU agreed to pay Ankara up to six billion euros (6.7 billion), to enable Turkey to provide the necessary living conditions for refugees there.

The deal also stipulates that migrants who arrive in Europe illegally across the Aegean Sea are sent back to refugee camps in Turkey, and in return the EU has agreed to take Syrian refugees from the camps on a one-for-one basis.

However, the Turkish government has repeatedly complained that the EU is not keeping to its side of the deal, and President Erdogan has even threatened to "open the doors to Europe anytime" and "put the refugees on buses," if the EU doesn't pay up, or liberalize its visa regime for Turkish citizens.

On Saturday, Erdogan complained that the EU has not paid the first 3 billion euros ($3.4 billion) it promised to Ankara as part of the deal.

"We ourselves gave shelter to millions of our Syrian brothers. The European Union has promised us 3 billion [euros]. Where is it? Nowhere," Erdogan said.