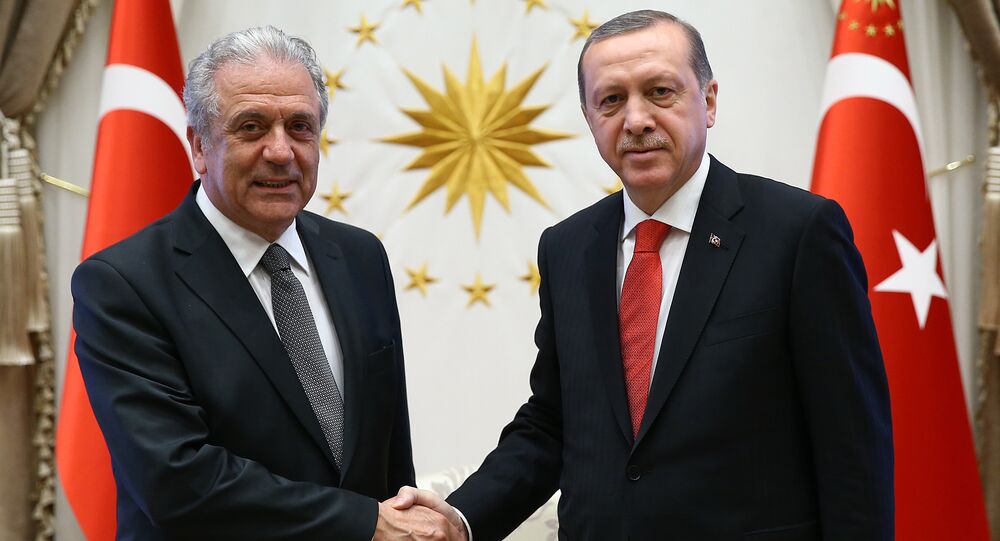 The European Commissioner for Migration, Dimitris Avramopoulos has said the controversial EU-Turkey migrant deal to relocate "irregular migrants" from Greece to Turkey is progressing, despite massive opposition to the deal within the EU, as well as from refugee charities.

Meanwhile, Avramopoulos has also delivered an upbeat report on the scheme to relocate 160,000 refugees from Greece and Italy around EU member states according to a quota system that has been widely slammed across Europe.

​Avramopoulos, September 28, delivered the latest report on the EU migrant crisis, covering two major policy decisions: the relocation plan and the EU-Turkey deal. His statement was upbeat on both, saying:

"All our measures on migration are interlinked. The EU-Turkey Statement has led to concrete positive results. The increased efforts made by member states over the past months on relocation, with more than 1,200 relocations alone in September, demonstrate that relocation can be speeded up if there is political will and a sense of responsibility," he said.

"The success of our common approach over the last months is essential for the success of everything else, including a gradual return to the Dublin system and a normal functioning of Schengen. Relocation has to succeed."

However, under the scheme to relocate 160,000 refugees from Greece and Italy to other member states under a mandatory quota system, agreed in September 2015, only 5,651 persons have been relocated.

© REUTERS / Marko Djurica
EU Migrant Crisis Deepens as Slovak PM Declares Quotas 'Politically Finished'
​Many countries — particularly in Eastern Europe — have refused to go along with the scheme, with both Slovakia and Hungary challenging the scheme in the European Court of Justice. Slovakia's Prime Minister told journalists: "Quotas today clearly divide the EU, therefore I think they are politically finished."

Meanwhile, the EU-Turkey migrant deal is also looking shaky. Under the deal, the EU was due to pay Turkey — initially — US$3.95 billion to bolster its refugee camps and accept "irregular" migrants denied asylum in Greece in return — on a one-for-one basis —  for Syrian refugees in Turkey being relocated in the EU.

The deal has run into serious opposition within the EU, following Turkish President Recep Tayyip Erdogan's crackdown on opposition groups, the media and human rights, which critics say make any talk of accession or visa-free access impossible, potentially plunging the deal into collapse.

6 months on since the #EUTurkey deal: "People cannot survive another six months of this misery" https://t.co/TBH4wLvvBq #Greece #refugees

​The UN Refugee Agency (UNHCR) and many leading refugee charities says the returning of refugees from Greece back to Turkey is against the Geneva Convention, as they believe Turkey is not a safe third country" because of its poor standards of refugee camps and treatment of refugees. In practice, only 578 people have actually been returned under the scheme.

EU Chiefs in Talks as Divisions Deepen Over Migrant Crisis