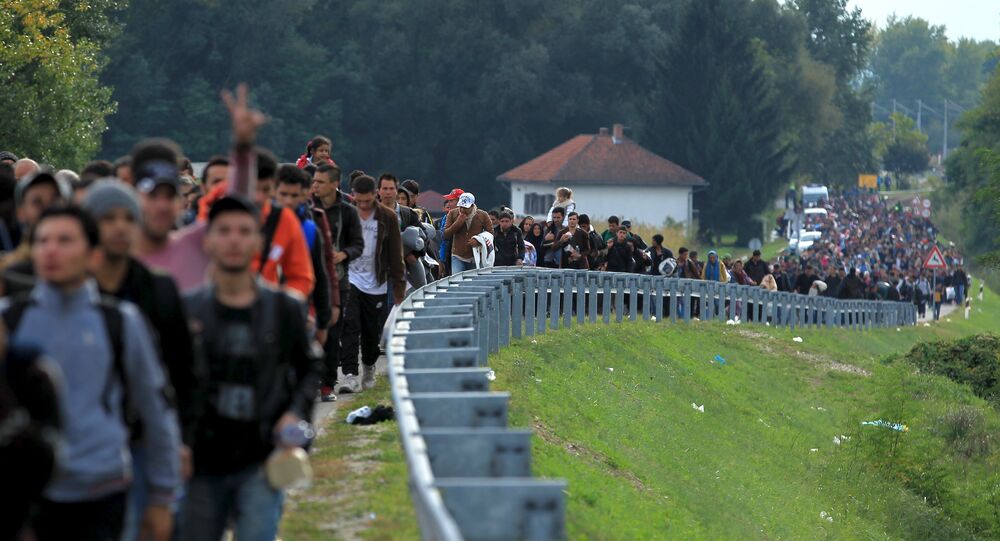 © Sputnik / Sergei Guneev
'Migration is a Poison': Hungary’s Orban Calls Migrants 'Terror Risk'
STRASBOURG (Sputnik) — The centers should be set up "as close as possible to the [migrant] emission countries," so that the EU could "sort out migrants, [distinguish] economic migrants from those who are really refugees and those who can have potential terrorist threat," Kover said on the sidelines of the European Conference of Presidents of Parliament.

He added that the countries which border war-torn states should also receive refugees.

"European community must develop a coordinated development policy which will rebuild these countries and make somehow appropriate for living of those people who leave these countries on economic and other reasons," he elaborated.

Hungary believes that the European Union "must preserve its European nature" and sovereignty of its member states, Kover stressed.

© AFP 2020 / AKOVOS HATZISTAVROU
EU Must Jointly Approach Root Causes of Migration Crisis
The conference, held under the auspices of the Parliamentary Assembly of the Council of Europe (PACE) kicked off earlier in the day in the French city of Strasbourg. The Conference includes the participation of speakers and presidents of the parliaments of the 47 member states of the Council of Europe, as well as of countries holding observer or partner status with the organization and some Central Asian and Maghreb countries.

Europe has been beset by a massive refugee crisis, with hundreds of thousands of undocumented migrants fleeing their crisis-torn home countries in the Middle East and North Africa to escape violence and poverty. EU border agency Frontex detected over 1.83 million illegal border crossings in 2015, in contrast to some 283,000 in 2014.

Luxembourg's Remark on Hungary's Exclusion From EU Not Agreed Upon - Steinmeier