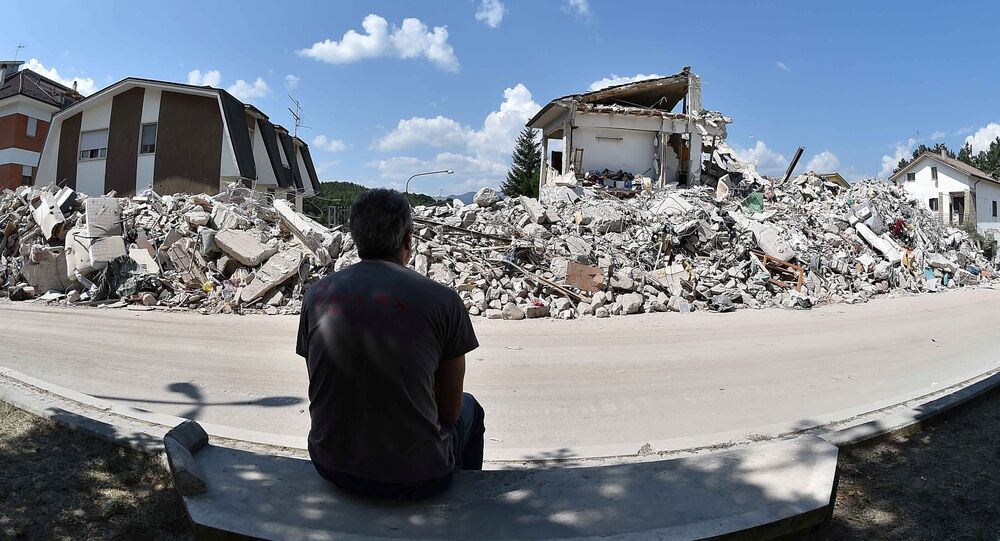 Charlie Hebdo's cartoons depicting victims of last month's earthquake in Italy as Italian food is a heinous and senseless desecration of the memory of those who were killed by the natural disaster, lawyer Mario Cicchetti told Sputnik.

© AP Photo / Martin Meissner
Charlie Hebdo Ridicules Results of 2016 Eurovision Song Contest
In an interview with Sputnik, lawyer Mario Cicchetti slammed Charlie Hebdo's cartoons depicting victims of last month's earthquake in Italy as "a heinous and senseless" desecration of the memory of those who died in the natural disaster.

The interview came after the administration of the Italian town of Amatrice, which was devastated by August's earthquake, filed a lawsuit against the French satirical magazine Charlie Hebdo for printing controversial cartoons depicting the disaster's victims.

As for Mario Cicchetti, he is a lawyer currently representing the interests of Amatrice's administration.

"This is a heinous, senseless and incomprehensible mockery of the victims of the natural disaster. Not everything should be the subject of satire, and in this case, the caricatures insulted thememory of the victims, the dignity of the survivors and the honor of Amatrice," he said.

Apaled with @Charlie_Hebdo_ cartoon mocking victims of Italy's earthquake. Not all cartoonists are that idiot. I'm sorry, @ciropellegrino

On August 24, a 6.0-magnitude quake shook central Italy, causing damage across numerous towns and resulting in the death of more than 290 people. The earthquake was followed by multiple aftershocks.

Charlie Hebdo cartoon about Italian earthquake which represents victims as lasagnas is not funny and is morally wrong.

Most of the victims lived in Amatrice, which filed an aggravated defamation complaint against Charlie Hebdo which Cicchetti said "has nothing to do with true satire."

"The Administration of the city and I as its spokesman, see Charlie Hebdo's publication as a criminal act committed by the authors of the cartoons and the weekly's chief editor; we confirm our intention to act as civil plaintiffs against two cartoonists and the editor-in-chief," Cicchetti said.

According to him, "the right to satire should not violate the limits of moderation and relevancy of verbal and visual images, in accordance with social and political viability."

© Flickr / Giampaolo Macorig
Vatican Newspaper Criticizes Charlie Hebdo for Depicting God as Terrorist
He added that if the court takes their side, it would mean that they will receive the right to compensation, which Cicchetti pledged would be given to relatives of the victims of the Amatrice earthquake.

Charlie Hebdo has a history for its use of over-the-top dark humor in its depiction of deadly disasters, such as the cartoons it published following the 2015 Russian plane crash in Egypt. Its mockery of the worst civilian air disaster in Russian history, in which over 200 people lost their lives, prompted public outrage in Russia.

On January 7, 2015, two Islamist gunmen burst into the editorial office of Charlie Hebdo, which had taunted Muslim extremists by publishing cartoons of the Prophet Muhammad, and opened fire. A total of 12 people were killed in the massacre.

Italy Grateful to Russian Emergencies Ministry for Assistance After Earthquake