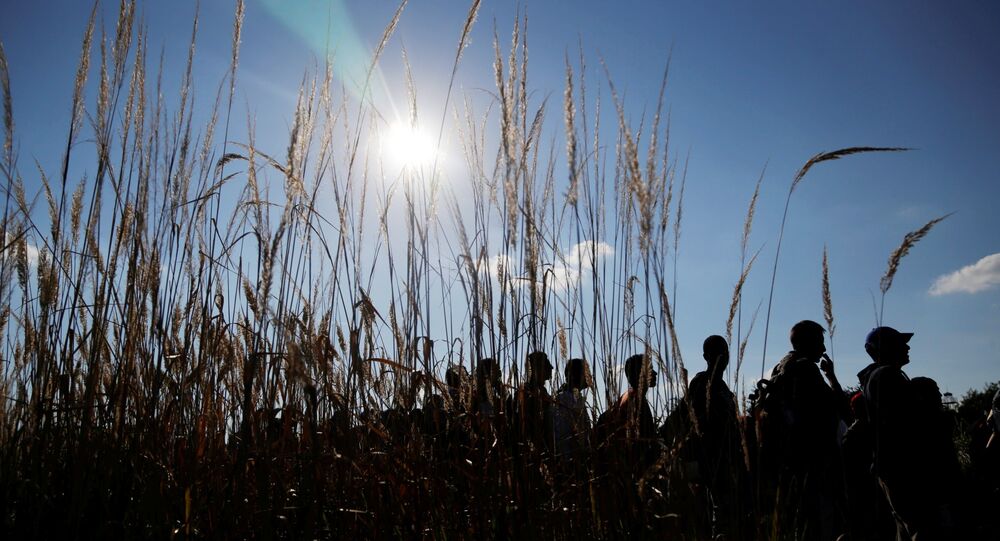 The campaign ahead of Hungary's upcoming referendum on whether to stick to the European Union's migrant resettlement plans is turning into a billboard war as the humorous Hungarian Two-tailed Dog Party joins in, the leader of the joke party, Gergely Kovacs, told Sputnik.

MOSCOW (Sputnik) — On October 2, Hungary will hold a referendum on migrant quotas introduced last year by the European Union for each member state depending on its size, population and social and economic indicators. The Hungarian government, led by the right party Fidesz, is urging voters to reject the EU quotas, arguing that Brussels cannot dictate its will on the independent country.

More than 4 out of 8 million citizens will have to cast valid votes to exceed the 50 percent minimum turnout that is needed for the referendum to be valid. According to the latest poll in mid-August conducted by Publicus, some 67 percent of respondents would say NO asked whether they want to let Brussels mandate the resettlement of migrants.

As the controversial referendum approaches, billboards mocking government policies seem to be the only effective way to counter the ruling party's anti-immigrant stance, Kovacs said.

Over the summer, the Hungarian government unveiled thousands of billboards linking migration with terrorism and criminality, with one poster claiming "Did you know? The Paris attacks were committed by migrants" and another poster stating that "there has been a sharp increase in the number of harassment against women in Europe since the start of the migration crisis."

The only party that supports the government's anti-migrants drive is the opposition far-right Jobbik, which now polls as the second most popular party in the country. The bulk of other opposition parties urge their voters to boycott the referendum.

The most visible and humorous campaign against the referendum is led by the satirical Two-Tailed Dog Party, which was founded as a street-art spoof in the mid-2000th and now intends to stand in the next general election in 2018.

"We've got some domains which the government should have bought [before], so we'll make some funny websites in the name of the government, we also make apps to help people practice how to invalidate votes, and there are so many government billboards that we also made an app which changes the billboard to ours if you look at them with it," Kovacs said about the party's initiatives ahead of the referendum.

By early September, the party had raised more than $100,000 from citizens in just two weeks to launch a billboard campaign countering that of the prime minister.

“Did you know? There is a war in Syria” and “Did you know? Corruption offenses are mostly committed by politicians," the party's billboards ask in a clearly satirical reference to the governments' posters.

Next week, three small opposition parties, the Together party along with the Modern Hungary Movement and the Dialogue for Hungary party, which are also urging voters to boycott the referendum, will launch their own more modest campaign with up to 400 billboards. Posters will show a man and a woman sitting on a couch and raising their middle fingers to a government referendum advertisement on their television screen.

The government does not disclose the information on how much it has spent on the campaign, but according to estimates by the web-site Index.hu, the cost of the campaign over the past three months approaches to some 3.5 billion forints ($12.6 million).

Many other parties share the vision that the October 2 referendum will be anything except a vote on migrants.

When plans to hold a referendum were finally set, the deputy leader of the left-wing opposition Democratic Coalition, Csaba Molnar, suggested that a valid referendum would be a prelude to leaving the European Union. In July, the opposition Hungarian Socialist Party's (MSZP) Vice President Zoltan Gogos also said that the quota referendum was actually a vote on Hungary’s EU membership. In late August, MSZP leader Gyula Molnar said that the Socialists were ready to support Fidesz in the EU “quota war”, but added that the referendum is unnecessary.

The Egyutt (Together) party, in its turn, said in an official statement that the quota referendum went against Hungary’s interests and was only meant to increase prime minister's power and wealth, while the Dialogue for Hungary party suggested that the referendum and the aggressive campaign was used by Fidesz to divert attention from real problems such as poverty, low wages, corruption and the ailing healthcare and education sectors.

The opposition parties, supported by Hungarian Helsinki Committee and the Hungarian Civil Liberties Union, are now urging their voters to boycott the October 2 vote or spoil the ballots by putting an "x'' in both the "yes" and "no" fields, when answering the question “Do you want the European Union to prescribe the mandatory settlement of non-Hungarian citizens in Hungary even without the consent of Parliament?"

According to the migrant redistribution plan, approved last September in Brussels, Budapest must take in some 1,300 refugees in two years.

In contrast to some EU countries, such as Austria, that were initially mostly welcoming towards the migrants but later toughened their position, Hungary has from the very beginning been very consistent in its stance that migration should not only be reduced and regulated but completely halted, as the Hungarian government press-office formulated to Sputnik in mid-August.

In addition to already existing fences, Hungary plans to build a second one on its border with Serbia to prevent more migrants from entering the country. This week Budapest also announced plans to beef up its police force with 3,000 new "border hunters" to tighten control at the barriers. The country has also adopted legislation which enabled officials to return migrants to Serbia if they are caught within 8 kilometers of the border.

Hungarian Prime Minister Victor Orban is admired by leaders of some of Europe's eastern states, and was given a ‘Man of the Year’ award earlier this week at an economic forum of the Visegard Group, consisting of the Czech Republic, Hungary, Poland and Slovakia. He is similarly disliked by some of Hungary's western neighbors for his tough stance on migrants and his unwillingness to share the common burden.

A striking example of the divisions sparked by the migrant issue within the European Union is the ongoing spat between Vienna and Budapest with Austria's interior minister threatening on Wednesday to sue Hungary if it refused to take back migrants crossing their shared border.