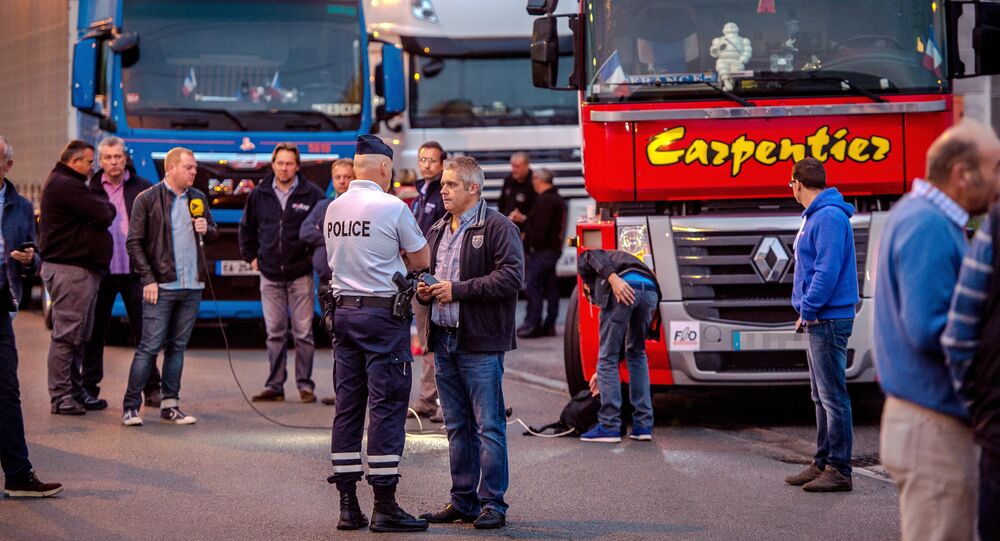 Farmers and teamsters driving at least 40 trucks and tractors joined a protest against the presence of the so-called Jungle refugee camp in Calais.

© AFP 2021 / PHILIPPE HUGUEN
Calais Activists Call to Close 'Jungle', Admit Refugees Into Society
MOSCOW (Sputnik) — Two convoys of at least 40 trucks and tractors joined a demonstration on Monday, slowing traffic on a major highway near Calais, France, to protest against the presence of the so-called Jungle refugee camp, according to the news outlet Franceinfo.

On Friday, French Interior Minister Bernard Cazeneuve announced the "fastest possible" closure of the camp, which is home to some 6,900 people according to the French authorities. Humanitarian groups working at the camp put the number at 9,000. Cazeneuve did not specify the schedule of the closure. While some of the migrants are refugees from war-torn countries such as Syria, Iraq and Afghanistan, many are simply African migrants from countries such as Eritrea who've taken advantage of Europe's lax borders and seek economic opportunities.

© Sputnik / Viktoria Ivanova
Activists Urge UK to Accept Some 400 Refugee Children From Calais 'Jungle'
According to the source, the blockage of the A16 road on the section between the cities of Dunkirk and Boulogne started at 6:30 a.m. local time (04:30 GMT) with the trucks moving slowly toward Calais. Between 300 and 500 people are said to be participating.

In the past several months, media reports have emerged of local truck drivers being threatened by alleged criminal gangs formed of migrants from the Jungle camp. The gangs have reportedly caused deliberate crashes on road in a bid to divert attention from undocumented migrants boarding vehicles on the way to the United Kingdom.