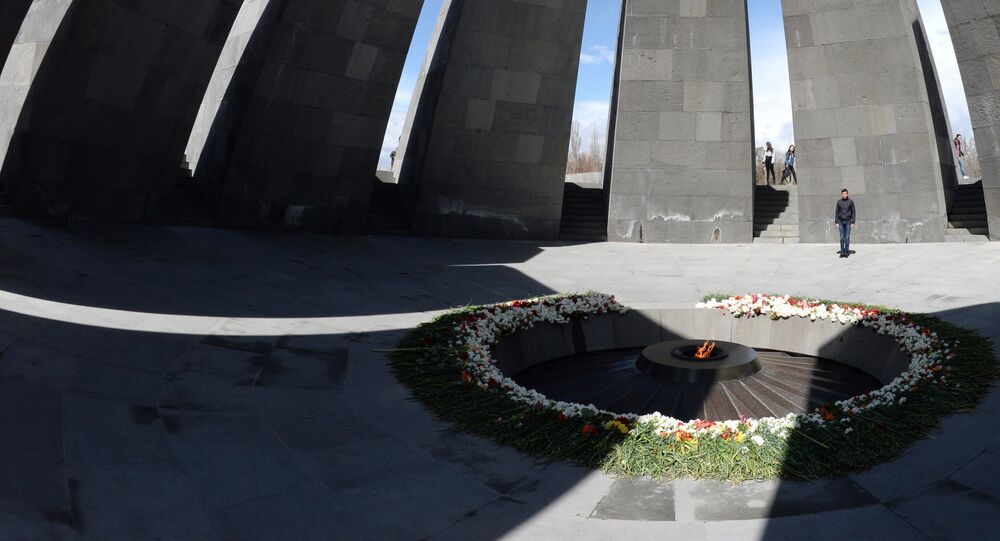 The German government is not trying to distance itself from the Bundestag resolution that recognizes the Armenian genocide, government spokesman Steffen Seibert said Friday.

MOSCOW (Sputnik) — Earlier in the day, the German magazine Spiegel speculated that Seibert would make a press statement in which he would attempt to distance the government from the Bundestag resolution, in order to resolve the issue of access for German officials to the Incirlic Airbase in Turkey to visit the country's soldiers stationed there.

"There can be no talk about that [attempt to distance]. It is not the business of the federal government to interfere in the affairs of another constitutional body," Seibert told journalists, as quoted by the Sueddeutsche Zeitung.

He, however, added that the Bundestag resolution was not legally binding.

© REUTERS / David Mdzinarishvili
Egypt's Lawmakers Put Forward Resolution Recognizing Armenian Genocide
In June, Ankara restricted the access of a delegation of German lawmakers to the airbase, where the Bundeswehr forces involved in the US-led coalition campaign against the Daesh jihadist group are deployed, after the German parliament adopted a resolution calling the early 20th century Armenian massacre a genocide. Despite the ban, in July, Germany decided to send a delegation to the base in mid-September.

On Monday, Turkish Foreign Minister Mevlut Cavusoglu said German officials would be able to visit the base provided the German government "takes steps" to distance itself from the Bundestag resolution.

The Incirlik Airbase hosts six German Tornado reconnaissance jets aircraft, as well as jets from the United States, the United Kingdom, Saudi Arabia and Qatar who are participating in the US-led coalition against Daesh, which is outlawed in many countries including Russia.