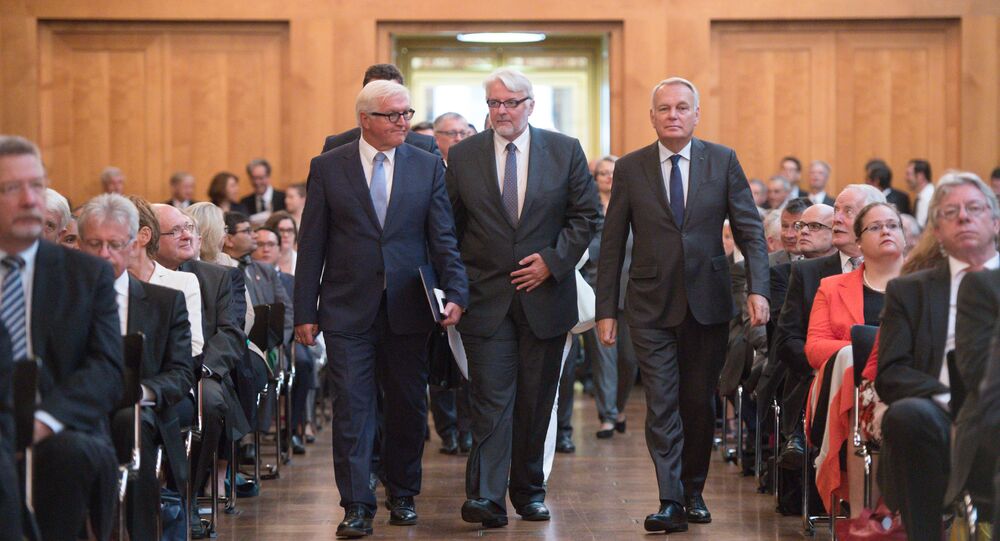 The Weimar Triangle: Is There Any Chance to Bring the Tripartite Back to Life?

It is now 25 years since a trilateral cooperation group between Germany, France and Poland was created, and now the three founders have vowed to reinvigorate the format. Sputnik Polska talks to Polish politician Tadeusz Iwiński about the possibilities of reviving of the full-fledged alliance within the European Union.

© REUTERS / Jon Nazca
EU Should Draw Conclusions From Brexit as Bloc's Mistake - Polish FM
Sunday, August 28 marked the 25th anniversary of creation of a trilateral cooperation group between Germany, France and Poland as a gesture of support to Warsaw by the two European heavyweights after the dissolution of the Warsaw Pact.

On August 28, 1991, then Foreign Ministers Hans-Dietrich Genscher of Germany, Roland Dumas of France and Krzysztof Skubiszewski of Poland gathered in the Eastern German city of Weimar to set up a consultative body that would promote cooperation and common interests between the three states in the wake of the dissolution of the Warsaw Pact, a collective treaty between the former Soviet Union and seven Central and Eastern European countries, of which Poland was a part.

“The trilateral cooperation group was meant to symbolize the depth of reconciliation between Germany and Poland, and to reassure the latter of its central role in the “new Europe,” this is how the European Council on Foreign Relations (ECFR) describes its purpose.

“It was also meant to act as an early indicator of the commitment made by France and Germany to the more eastern European Union that was to come,” it adds.

Now, 25 years later, the German, French and Polish foreign ministers gathered in the same city to celebrate the 25th anniversary of the Weimar Triangle political forum.

After the meeting Frank-Walter Steinmeier, Jean-Marc Ayrault and Witold Waszczykowski vowed to revive the format in the wake of the Brexit vote.

© AP Photo / Alik Keplicz
Weimar Triangle: Poland May Join France, Germany in Developing New Tank
“Confronted by unparalleled challenges in Europe… (we must) intensify cooperation and create a new drive,” they said in a joint statement.

They promised to “reinforce the foundations of European integration… aspiring to a more flexible EU that reflects the different ambitions of member states regarding increased integration” once Britain had left the bloc.

However, ECFR notes that the Weimar Triangle is “in bad shape these days.”

“It feels like the cooperation between France, Germany and Poland should be moved to intensive care, but the triangle hasn’t even seen a doctor yet. The fact is that all three corners of the triangle are letting each other down,” it says.

Each country has its own internal problems to settle first.

“Germany, preoccupied by the magnitude of the refugee crisis, is forced to act under enormous pressure with little room for compromise or lead-time, and against strong opposition among EU governments,” the council says.

“France appears to be paralyzed by the 2017 presidential elections and its attempts at structural reform economic growth, while both traditional political camps are frightened by the seemingly unstoppable rise of the Front National.”

“Further east, Poland’s new national-conservative government has already demonstrated that the country’s status as an EU member will no longer be considered a central commitment or principle.”

“There is a certain problem here as the format is facing similar problems as other international organizations and structures who have found themselves at the crossroads,” he told Sputnik.

“There is a lot of ambiguity and chaos around. The world is engaged in many conflicts and wars,” the politician said.

He further explained that the European Union is becoming weaker and there are lots of signals that after the Brexit referendum and its decision to exit the EU, the block will weaken even further.

In this new situation, he said, there is every reason to revive the German-French-Polish cooperation, which can be of a special value after the UK leaves the European Union.

This is eespecially relevant ahead of the EU Summit in Bratislava, scheduled for September 16, which won’t make any decisions but will discuss the block’s future and the reforms that must be made.

© Sputnik / Aleksey Nikolskyi
Steinmeier's Calls for Arms Control Show Berlin Trying to Be Leading Force in EU
The politician however noted that the Weimar Triangle was particularly active before Poland joined the EU in 2004.

The last high-level French-German-Polish Summit was five years ago, he said, but the meetings of the country’s foreign ministers happen almost every year. Sunday’s meeting was their 23rd gathering.

The politician, although, pointed out that the foreign ministers have so far arrived at only one initiative following their last meeting: to make such gatherings annual, but not within the trilateral format but within the whole of the European Union. To discuss broad security issues, such as creation of united European army, which still looks utopian, and the issues of internal security.

The above idea however was first expressed by the Weimar Triangle, and now it has all the chances to be implemented, he noted.

EU: Is There Life After Brexit?