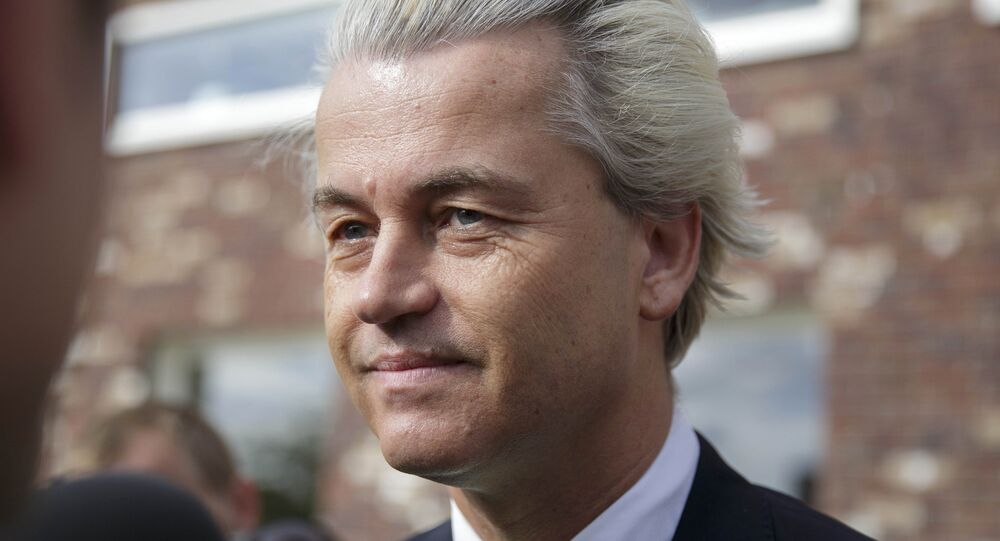 Controversial Dutch lawmaker Geert Wilders of the Freedom Party has published a manifesto calling for an end to accepting refugees and immigration from Islamic nations, closing all mosques and banning the Koran, as well as for the Netherlands to leave the European Union.

© AP Photo / Yves Logghe
Dutch Retreat: Netherlands' Nexit Vote May Be 'Symptomatic' of EU Fragmentation
His divisive and controversial proposals have propelled the Freedom Party to the forefront of the nation’s major polls for months. Wilders is also the frontrunner to become the next Dutch Prime Minister.

The page-long manifesto calls for a complete and total "de-Islamification" of the nation. In addition to closing all mosques, the proposal also states his intention to close all Islamic schools and asylum centers, and ban Muslim women from wearing headscarves in public.

Previously, he has compared the Koran to Adolf Hitler's Mein Kampf.

© Flickr / Tim Hamilton
Anti-Muslim Group Launches Muhammad Cartoon Billboard Campaign in St. Louis
Last month, Wilders visited the United States and spoke at a “Gays for Trump” event hosted by controversial Breitbart tech editor Milo Yiannopoulos. Sputnik News was in attendance as he spoke on his views for the Netherlands and why he supports Donald Trump, in front of a wall plastered with photos of nearly-nude young male models wearing “Make America Great Again” hats.

“Get rid of your political correctness,” Wilders declared to massive cheers from the crowd. “Islam and sharia law are exactly the same,” he said, warning the audience not to “allow Islam to be planted in your soil.”

Elections for the lower house of the Dutch parliament will take place next year, and candidate manifestos are not due until March 15. Wilders is the first to publish.