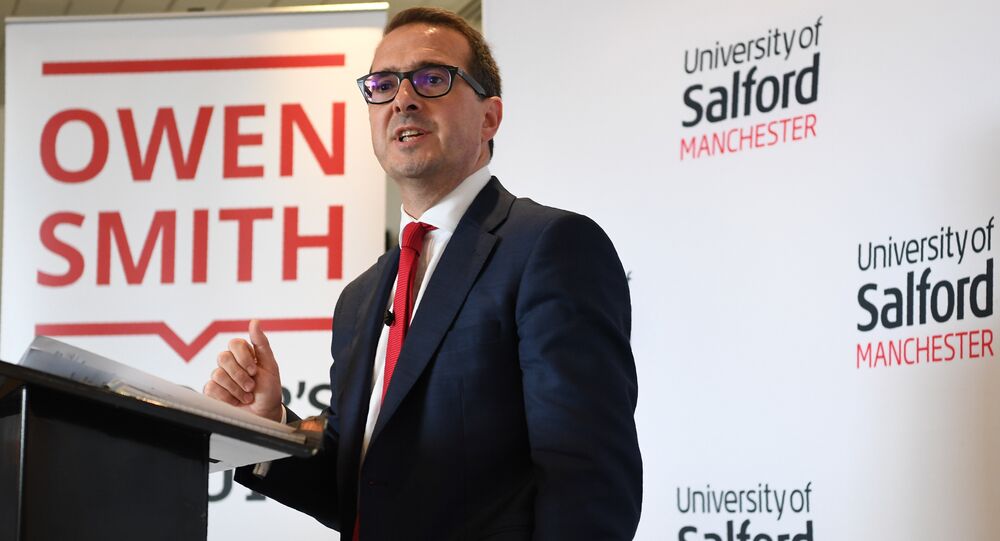 UK Labour Party challenger Owen Smith has said that - if he wins the leadership battle against incumbent Jeremy Corbyn - he will campaign for British Prime Minister Theresa May to hold a second referendum on the UK's membership of the EU, or a general election.

© REUTERS / Stefan Wermuth
UK Labour Party Facing Split as MPs Take on Grassroots Corbyn Supporters
The leadership election was sparked off by criticism of Corbyn for his lackluster campaign to keep Britain in the EU — which is Labor Party policy. He is well known to be euroskeptic and many felt he had let the party down when Britain voted to leave the EU in the referendum on June 23.

Smith said that many people had been lied to — particularly over claims the Britain's contribution to the EU could be diverted to the National Health Service (NHS).

"I'm saying that we didn't actually know what we were voting on. Theresa May says 'Brexit means Brexit,' but in my view we were fibbed to about the extra money for the NHS — there is no extra £350m — [and] we were fibbed to about the suggestion there were going to be easy answers on immigration. There are not," he told the BBC Radio 4 Today program.

My campaign remains on track. Proud to be genuinely standing up for ordinary people.

​"The crucial point that I'm trying to make… is that at the end of this, when we know what is really on offer, when Theresa May has done this negotiation… at that point we could put it back to the country, either in a second referendum or in a general election, in which under me Labour would be arguing that we should remain. I still fundamentally believe that we didn't fight hard enough, that Jeremy didn't fight hard enough. I still feel that we should stay in."

Following the referendum, more than 1,000 lawyers wrote to — then — Prime Minister David Cameron pointing out that the result was merely advisory and not binding on parliament. They wrote: "The European Referendum Act does not make it legally binding. We believe that in order to trigger Article 50, there must first be primary legislation. It is of the utmost importance that the legislative process is informed by an objective understanding as to the benefits, costs and risks of triggering Article 50 [of the Treaty of Lisbon, beginning the exit process]."

Meanwhile, lawyers Mishcon de Reya have launched a legal challenge to the referendum, saying the prime minister cannot invoke Article 50 without the consent of parliament, which does not have to abide by the result of the referendum (although going against the outcome will be political dynamite).

"We must ensure that the Government follows the correct process to have legal certainty and protect the UK Constitution and the sovereignty of Parliament in these unprecedented circumstances. The result of the Referendum is not in doubt, but we need a process that follows UK law to enact it. The outcome of the Referendum itself is not legally binding and for the current or future Prime Minister to invoke Article 50 without the approval of Parliament is unlawful."

Thus, if — and it's a big if, given Jeremy Corbyn's huge grassroots support — Owen Smith wins the Labour leadership, he could force a parliamentary vote for a second referendum. Government officials are still mulling over the letter from over a thousand lawyers and Britain awaits the outcome of the Mishcon de Reya legal challenge.

I'm told that tonight our campaign made its 200,000 call while I was at the Walthamstow phonebank #LabourLeadership pic.twitter.com/vUMeVy2Cx5

​So, Brexit still hangs in the balance, although parliament will have its conscience to tackle if it tries to go against the will of the people cast on June 23.