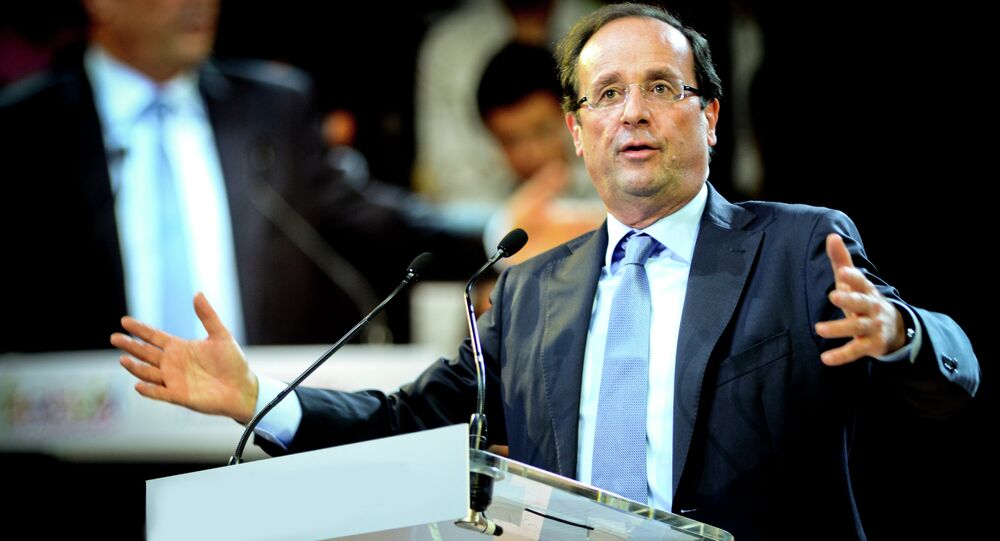 Hit From Right to Left, Inside and Out, France’s Hollande Facing Open Rebellion

With a stagnating economy, security concerns and rising nationalism, French President Francois Hollande is facing an uphill battle ahead of next year's national elections. Deeply unpopular in the polls, Hollande is now facing challenges from within his own party amid calls for him to stand down.

Former economy minister Arnaud Montebourg is the latest from Hollande's Socialist party to come out in open rebellion of the leader, after he launched his own presidency bid, slamming the country's term under Hollande as "wasted."

"I am a candidate because it is impossible for me to support Francois Hollande," Montebourg said during his campaign launch.

​"The results of his five-year term are simply indefensible," said Montebourg, who left his post as economy minister in 2014 after repeated criticism of Hollande's pro-business agenda.

Montebourg didn't specify whether he would run for the Socialist party nomination or run as an independent candidate in the May 2017 election, joining an already crowded list of people jockeying to represent the French left against opposition from the Republican party and far-right Front National.

Carefull all, Arnaud Montebourg has announced he will stand for Président after 2 yeas en enterprise! Pass the baguette.

​"I shouldn't be here proposing an alternative because that's what we promised four years ago," he said.

"But four years later we are left with a feeling of waste. Like for the majority of French people it is impossible to support the current president. I am candidate for the presidency."

Montebourg's presidential announcement comes amid longstanding dissatisfaction with Hollande's premiership from all sides of the political spectrum in France.

The discontent has seen the rare moment where a ruling leader is being actively challenged by former government colleagues for the presidential nomination — in the form of Montebourg, former ecology minister Cecile Duflot, and Benoit Hamon, the former education ministry chief.

France finally making some headway on unemployment: jobless rate below 10% for the 1st time since 2012. pic.twitter.com/Dss4cvEszy

​While Hollande pitched his 2013 campaign on boosting France's sluggish economy, a stubborn unemployment rate of around 10 percent has led many to declare Hollande's reforms as failures.

France's economic woes have led the president to make more drastic measures, with Hollande utilizing the little-used Article 49 of the French constitution to bypass parliament and ram through labour reforms to scrap the country's 35-hour working week as well as other measures aimed at creative a more flexible workforce.

Labour reforms in #France are phoney, will make no difference to sclerotic economy.

​While government officials say the changes are necessary to stimulate job growth and help French businesses, the reforms have infuriated the left of his own Socialist party, who see the changes as an attempt to wash away France's strong workers' rights laws.

Concerns Over Security and Nationalism

Another key issue that has divided the French public is the issue of national security following the series of terrorist attacks that have taken place in France over the past couple of years.

While the government has introduced a series of security and surveillance measures to increase the powers of law enforcement authorities, Hollande has once again been hit from both the right and the left over the changes.

France's anti-terror measures under intense scrutiny! One of the Islamists who attacked a church was wearing an electronic surveillance tag.

​Given the repeated attacks, critics from the right say the security crackdown hasn't gone far enough, while some of Hollande's own lawmakers have criticized the moves as being over excessive and counterproductive in the fight against terror.

These security concerns have led to a rise in support for the Euroskeptic far-right Front National (FN), led by Marine Le Pen, while former President Nicolas Sarkozy from the opposition Republican party is also firming as a candidate for next year's election.

​While Hollande has not yet made up his mind on whether to run as the Socialist party candidate next May, deeply unpopular polls, economic woes and security concerns have meant the president is facing an open rebellion while still in office.