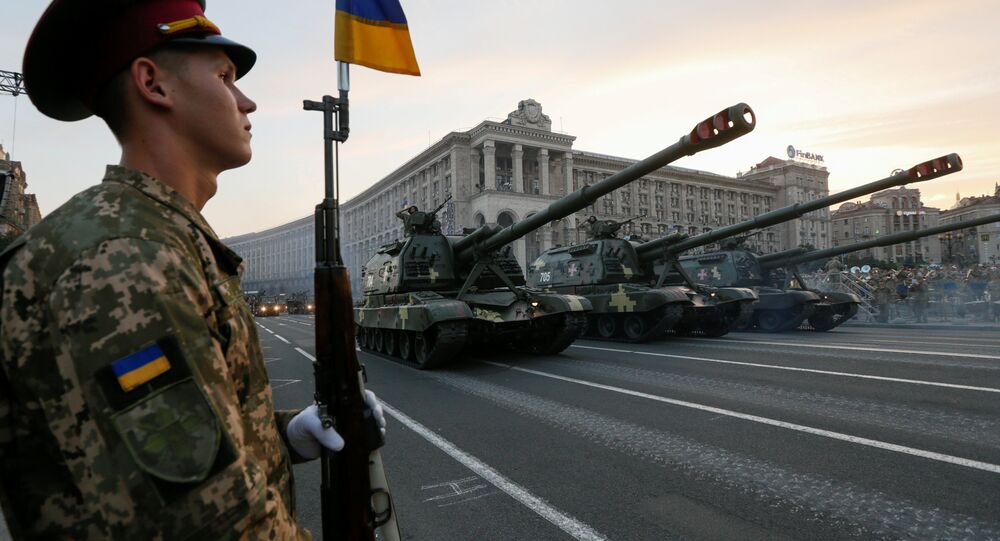 The Ukrainian Defense Ministry is coming under verbal assault from Kievavtodor, a municipal corporation charged with maintaining the Ukrainian capital's streets, for literally tearing up asphalt in the city's streets amid preparations for Wednesday's massive military parade.

The Ukrainian military has been making preparations for a large-scale military parade in Kiev dedicated to the 25th anniversary of the country's independence, celebrated on August 24. Unfortunately, according to a local agency charged with maintaining and repairing the city's streets, the army's negligence and lack of professionalism have resulted in the parade rehearsals seriously damaging the road surface in the center of the capital.

The agency, known as 'Kievavtodor', complained about what's going on in its official Facebook page, writing that "the asphalt in the streets where military equipment has passed has faced tremendous damage."

According to the road authority, the damage occurred "as the result of elementary negligence, a lack of professionalism and indifference, despite repeated assurances that the military equipment would be transported on special vehicles, with their tracks fitted with special rubber or propylene plates."

'Kievavtodor' photographically documented the instances where the city's asphalt has been damaged.

Presidential advisor Yuri Biryukov shot back at the agency's criticism, writing on his own Facebook page that the damage was "just a scratch." Later, the Ukrainian Defense Ministry's press service offered its own official reply, denying the extent of the damage and suggesting that the poor quality of the roads, not the heavy equipment's movement through the streets, was responsible for the damage. Furthermore, the Ministry added that the indentations left by the tanks and other mechanized units' treads would disappear over time.

© Sputnik / Stringer
Tanks in the streets of Kiev, brought in for a practice run of the military parade dedicated to Ukraine's Independence Day, celebrated August 24.

On Ukrainian President Petro Poroshenko's insistence, this year's Independence Day celebrations will feature a massive military parade, featuring about 200 pieces of military equipment making their way through the center of Kiev. The extravagance of the parade has led to criticism from some quarters of Ukrainian society. For her part, lawmaker Nadezhda Savchenko (the former POW held in Russia and handed over to Kiev in May), called the parade an "abomination, a spit to the face to the soldiers who stand on the front lines without boots, without uniforms."

Ukrainian Shelling Leaves Over 200 Injured in Donetsk Republic in 2016