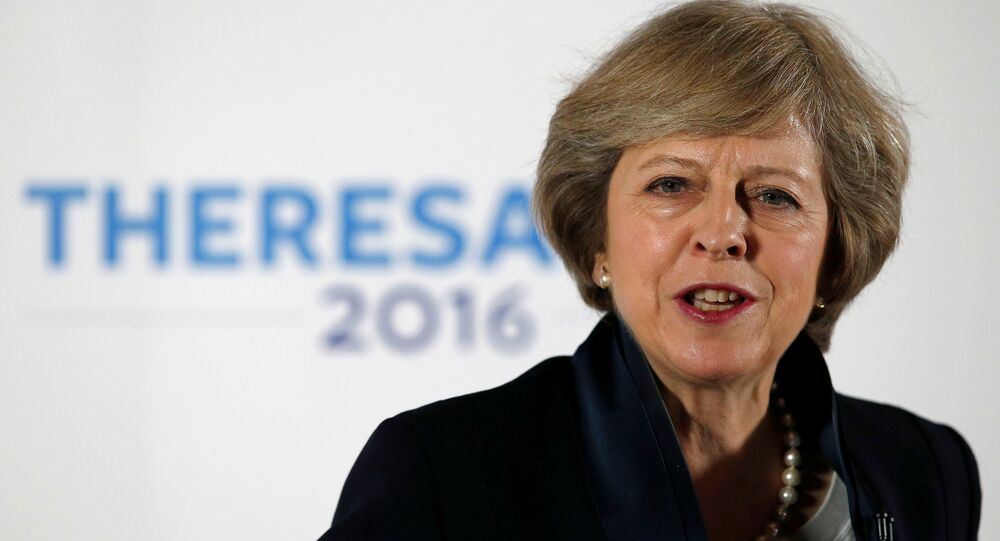 Theresa May Brokers Brexit Deal With Bratislava Amid Shared Euroskepticism

UK Prime Minister Theresa May flies to Bratislava Thursday (July 28) to speak with her Slovakian counterpart Robert Fico over Brexit, hoping that Slovakia's opposition to migrant quotas can be used to leverage his support for a new deal for the UK after its leaves the EU.

© REUTERS / Hannibal Hanschke
Merkel Says Germany Ready to Wait for UK’s ‘Defined’ Stance on Brexit
Slovakia holds the current rotating presidency of the EU and will play a major role in the political maneuvering ahead of Britain invoking Article 50 of the Treaty of Lisbon, which triggers a minimum two-year negotiating period during which Britain's exit and new deal with the EU is planned.

May has already held talks with German Chancellor Angela Merkel and French President Francois Hollande — both seen as crucial cogs in the wheels of renegotiation. But Slovakia's role will be critical for another reason.

​The In-Out referendum on Britain's membership of the EU was largely fought on the issue of immigration. Feelings are running high over the sheer volume of EU migrant workers flooding into Britain.

Some complain that they only do so to enjoy the UK's generous welfare system, others that they take jobs at lower salaries then their UK counterparts.

The EU migrant crisis — and the camp in Calais — dominated the headlines, with many seeing immigration running out of control and sparking the spate of terrorist attacks that have blighted Europe in recent months.

Slovakia was in the frontline of the migrant crisis — being part of the West Balkan route that hundreds of thousands of migrants trod to reach Western Europe. In February 2016, a plan by the Visegrad group of countries — the Czech Republic, Hungary, Poland and Slovakia — together with Bulgaria and Macedonia called for urgent action to close the borders Macedonian and Bulgarian borders with Greece to deal with the refugee crisis.

The plan — which sources described as a new "iron curtain" — would effectively strand Greece outside of the Schengen area and put them at odds with German Chancellor Angela Merkel and European Commission President Jean-Claude Juncker, who are calling for Schengen to continue and for a pan-European solution to the crisis.

Moreover, in December 2015, Slovakia filed a lawsuit at the European Court of Justice  against a European Union decision to redistribute 120,000 asylum seekers among member countries — the first legal challenge to a measure that has divided the bloc.

Theresa May will be using Slovakia's reaction to the migrant crisis to develop a relationship with Bratislava that may provide for some sympathy with Britain over immigration which may create some wiggle room in the Brexit negotiations.