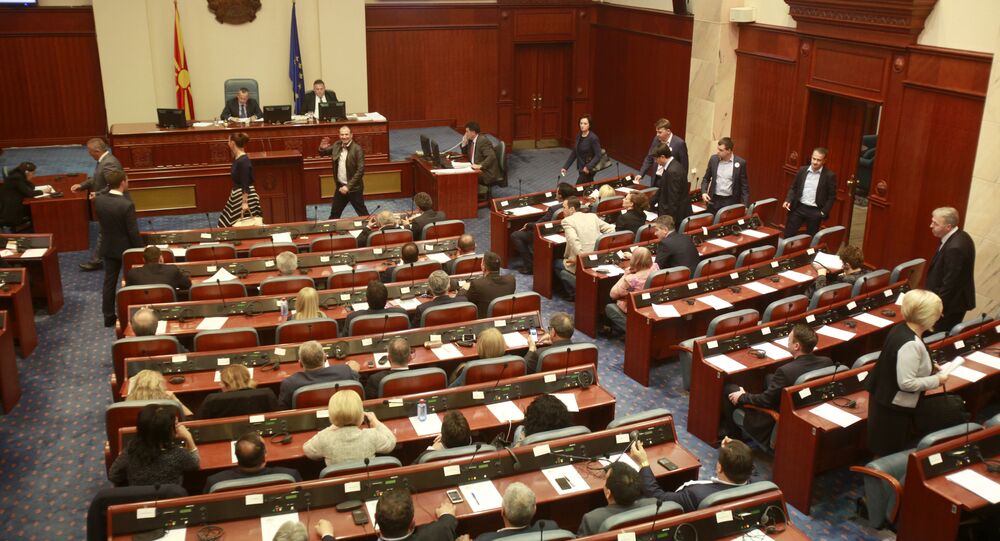 Macedonia will hold early parliamentary elections in December. The move has been agreed upon by the country’s four main parties as a means of ending the country’s protracted political crisis.

The preliminary deal, announced by US Ambassador to Macedonia Jess Baily, inspires hope that the Balkan nation’s more than yearlong political strife can finally be resolved.

In an interview with Sputnik Danko Maleski, a professor of international law at Skopje, said that the fact that the deal was announced by the US envoy should be taken very seriously.

“The US and the European Union closely coordinate their positions on resolving the Macedonian crisis, but while Europe remains split on the issue, the American policy is coordinated from a single center, that’s why its position is stronger,” Danko Maleski said.

He agreed that this was good news for Macedonia, but feared that it would hardly be able to change anything.

“From a political point of view, Macedonia has been in a limbo for quite some time now. People need a chance to speak their mind in legitimate and honest elections. It still inspires hope but it still remains to be seen how our political parties agree on voting lists, etc.,” he added

He also feared that the sticking points at the heart of the current crisis, namely the abuse of power by members of the ruling VMRO-DPMNE party of Prime Minister Nikola Gruevski who stepped down last January in the run-up to early election, would not be properly addressed.

“We need a fair resolution of contentious issues. If this does not happen, the crisis will not go anywhere even if we have these snap elections in December, because we are talking about the future of Macedonia as a law-governed state.”

He also warned against a situation when all those enmeshed in criminal affairs appear on the voting lists. “This would complicate the situation even more,” Professor Maleski emphasized.

The political crisis in Macedonia erupted after allegations that the government of then-Prime Minister Nikola Gruevski had illegally wiretapped opposition politicians, judges, and other members of the country’s political elite.

Whether the United States succeeds in doing what the EU has failed to accomplish and the effect this could have on Macedonia’s future policy is hard to say.

If Washington’s involvement is a continuation of its support for the Macedonian opposition intended to undermine Russia’s influence, then the current political crisis will only deepen after the December elections. In other words, if the US-backed parties win, Washington will have another “satellite” in the region.