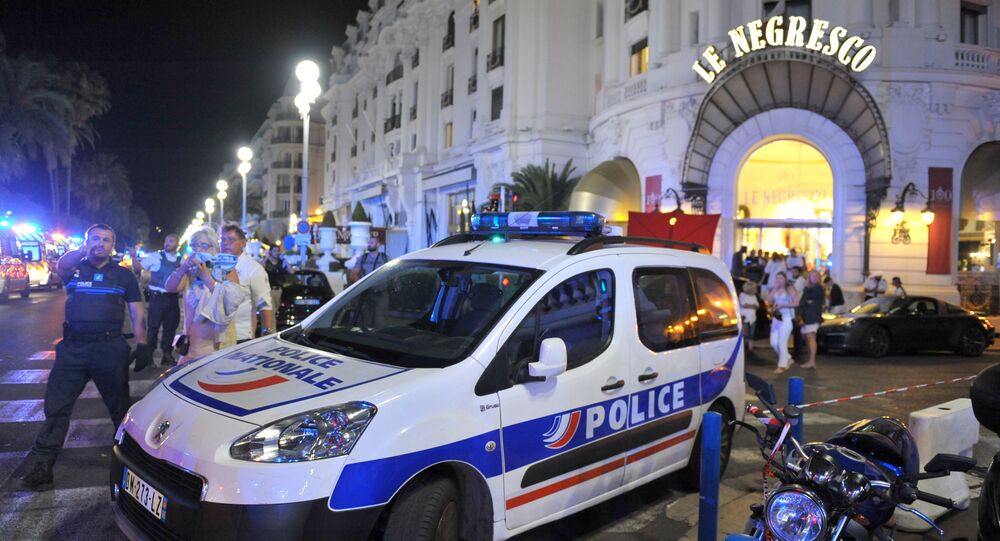 Truck Attack in Nice: What Is Known So Far (PHOTO, VIDEO)

At least 84 people have been killed and more than 100 injured after a 31-year old French national of Tunisian origin drove a white truck through a crowd celebrating France's national day in the city of Nice in what President Francois Hollande described as an "undeniable" terrorist attack.

The attack took place at approximately 11 p.m. on Thursday night at Nice's waterfront following a fireworks display marking the Bastille Day holiday in the fifth most populous city in France. It has become the worst terrorist attack in Nice's history.

The claimed claimed the lives of at least 84 people, including children. Approximately 20 people are reported to be in critical condition.

1 / 5
© REUTERS / Eric Gaillard
A man walks through debris scatterd on the street the day after a truck ran into a crowd at high speed killing scores celebrating the Bastille Day July 14 national holiday on the Promenade des Anglais in Nice, France, July 15, 2016.

The attack was carried out by a 31-year-old male, who held dual French and Tunisian nationality, who drove the truck into the crowd. His name has not been released yet. The driver was later killed by the police. Eyewitnesses have said that he fired at law enforcement officers before being fatally shot, but investigators have not confirmed these reports.

© REUTERS / Eric Gaillard
Terrorist in Nice Truck Attack Was City Resident of Tunisian Origin
No terrorist organization has claimed responsibility for the attack so far.

France has been plagued by terrorist attacks in recent months, including a deadly shooting at the office of the Charlie Hebdo magazine and the hostage crisis at a kosher supermarket in Paris on January 7-9, 2015, as well as coordinated shootings and bombings at the Bataclan theatre, the Stade de France stadium and other location in the French capital on November 13, 2015.

European authorities should be prepared for similar terrorist attacks happening anywhere across the continent, Claude Moniquet, a retired French journalist and a former intelligence agent at the French Directorate-General for External Security, told RIA Novosti.

Terrorists "could target anything, including beaches, restaurants, discos, trains, etc.," he observed.

The attack prompted the French president to extend the state of emergency that was declared following a night of terror in Paris last year by additional three months. The November 13 attack claimed 130 lives and left more than 360 people injured.

The French anti-terror agency has been tasked with investigating the attack.

"France as a whole is under the threat of Islamic terrorism. We have to demonstrate absolute vigilance and show determination that is unfailing," Francois Hollande said in his address. "We are in a war with terrorists who want to strike us at any price and in a very violent way," French Interior Minister Bernard Cazeneuve said.

US President Barack Obama described the incident as "a horrific terrorist attack," adding that "we stand in solidarity and partnership with France, our oldest ally, as they respond to and recover from this attack." US State Secretary John Kerry described the attack as "horrendous."

"My prayers and condolences to the victims and families of the terrible tragedy in Nice, France. We are with you in every way!" Donald Trump tweeted.

My prayers and condolences to the victims and families of the terrible tragedy in Nice, France. We are with you in every way!

"Every American stands in strong solidarity with the people of France," Hillary Clinton said in a statement. "We say with one voice: we will not be intimidated. We will never allow terrorists to undermine the egalitarian and democratic values that underpin our very way of life."

"Every American stands in strong solidarity with the people of France" —Hillary on the attack in Nice pic.twitter.com/BBGgHucSE0

​​"All of us who have come together at the ASEM summit are united in our feeling of disbelief at the attack of mass murder in Nice," German Chancellor Angela Merkel said on the sidelines of a summit between Asian and European leaders in Mongolia. "Germany stands in the fight against terrorism at France's side, united with many, many others. I am convinced that, despite all the difficulties, we shall win this fight," she added.

European and Asian leaders pay respect to victims of #Nice attack. We stand united against violence and hatred pic.twitter.com/NU0IRhZd7H

​"We will fight against terrorism" both in the EU and beyond its borders, European Commission President Jean-Claude Juncker pledged. "Our determination will be matched only by our unity."

We will fight against #terrorism inside & outside #EU. Our determination will be matched only by our unity. #Nice06 pic.twitter.com/2EG1RvzIH2

"My heart goes out to the victims and their families. My mind cannot grasp this senseless violence," Finland's former Prime Minister Alexander Stubb tweeted.

Waking up to horrible news from #Nice. My heart goes out to the victims and their families. My mind cannot grasp this senseless violence.

Russian Prime Minister Dmitry Medvedev urged the international community to "show solidarity" and to "do everything we can to fight terrorism."

​Two upcoming events, a Rihanna concert and a jazz festival, have been cancelled following the attack.

Many have taken to social media to express their condolences and horror after the attack in Nice.

#Nice this world needs a healing touch.. All our leaders have failed

Jesus. What horrendous news to wake up to. 2016 just keeps getting worse doesn't it?#nice

Has broken my heart hearing such tragic news. Condolences to all family and friends of those lost, Rest in Peace #Nice

Stunned by the news from #Nice which I hadn't caught last night. Huge death toll from terrorism again in that country. Tragic.

Saddened by the heartbreaking news coming in from #Nice, France barely celebrated its #BastilleDay yesterday…

Horrendous news from Nice- thoughts and prayers are with the French. These attackers are pure cowards to the core! #Nice #BastilleDay