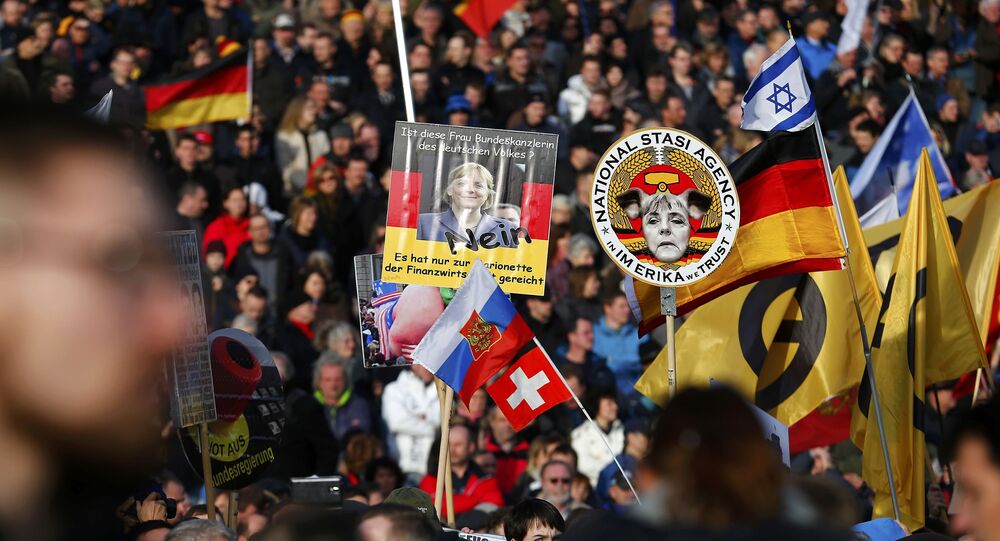 Political extremism in Germany has risen sharply in the past year, with far-right, far-left and Islamist extremist groups becoming more violent and brutal, the country's domestic intelligence agency has said.

He added that security officials had "observed not just a rise in membership but also an increase in violence and brutality," in a worrying trend for the country.

The most-widely publicized forms of violence were recorded by far-right groups, with 1,408 violent incidents recorded in 2015, a rise from 990 in the year before.

Pictures of #Pegida walk in #Dresden… again many people. pic.twitter.com/Yz6yV163bl

​The spike in attacks, of which many were targeted against foreigners or asylum hostels, came as Germany accepted more than one million refugees and migrants in 2015.

"The intensity of right-wing extremist militancy started in early 2015 and increased steadily — from threats against politicians and journalists to arson attacks on asylum seeker shelters and attempted killings," the report said.

The rise of far-right extremism in #Germany now hits a #refugeecamp in German city of #Dusseldorf pic.twitter.com/Tf6XEl6U34

​The report, from the Federal Office for the Protection of the Constitution, also looked at the role of social media and how such networks "play an important role in agitation and radicalization," with an increase in hate speech leading to an increase in attacks.

While far-right and anti-immigrant incidents of violence have been widely covered in the media, authorities also highlighted the increase in extreme left-wing violence in Germany.

Such incidents, often targeting far-rights groups or members of authority, such as the police, rose to 1,608 in 2015, a jump from 995 the year before.

Violence erupts as citizens storm European Central Bank in Germany. This is just the beginning!

​Aside from political extremism, the government also drew attention to the threat of Islamist violence in the country, with an estimated number of 10,000 radicals living in Germany.

The report stated that the influence of such radical Islamists could push others into radicalization, amid fears that some jihadists and war criminals had managed to enter Germany during last year's huge refugee influx.