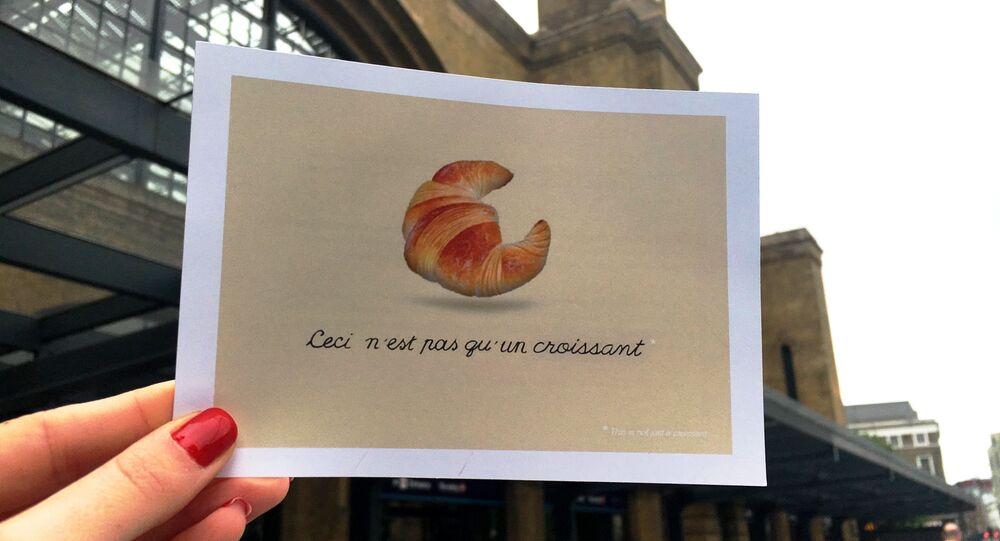 Hundreds of Londoners missed out on a free French croissant at King Cross railway station after the Metropolitan Police stepped in and alerted "Operation Croissant" that mixing "meat, drink, entertainment" with a message of any kind before an election is against the law.

#OperationCroissant turned into "Operation Postcard" with almost 500 cards carrying messages of friendship and solidarity handed out to commuters scurrying between Kings Cross and St Pancras, the Eurostar terminal.

No croissants due to UK regulations but lots of postcards from France handed out #operationcroissant #EUref #Brexit pic.twitter.com/phAbAvmwQQ

"The idea was conceived by a group of friends on both sides of the Channel who wanted to show a gesture of love and good will between London and Paris," writer, Rosa Rankin-Gee told Sputnik.

"People wanted a chance to say something sweet and positive during a debate that has been characterized by negativity."

Rankin-Gee says she is English and has lived in France for the past five years and admits she has personally benefited from Europe's open borders and freedom of movement.

"We've tried to keep this campaign as a-political as possible — but I agree with the sentiments that we are stronger together. No man is an island."

A message from a 'passionate European' Imogen Roy, one of the #operationcroissant organizers #EUref #Brexit pic.twitter.com/XNvuOPOGYZ

"The response from French people was so positive. So many people wanted to write a message, or help volunteer. We received hundreds of messages from Parisians and from people living in Northern France.

Other messages simply said: "We love you please don't go."

"Some of the messages were really moving and we started receiving message of support from Holland, the US and Australia showing their solidarity to the European Union," Roy told Sputnik.

#OperationCroissant at King's Cross station in London, messages from Paris to London with love #EUref pic.twitter.com/JdSR03Lig8

"I'm an immigrant to France. I was born in London, grew up in Germany, schooled in Scotland and live in France. I feel European first, British second."

The croissants had been baked in a 12th century Parisian bakery in a wood fire oven — but after a conversation with the Metropolitan Police and the Electoral Commission, they agreed not to hand them out.

"So we've donated them all to the St Mungo's homeless shelter in Kings Cross instead, who have said they are very pleased to receive them."

Our croissants at first light in Paris this morning. Their final destination- a homeless shelter #operationcroissant pic.twitter.com/1yhrIwH4pg

The inspiration for Operation Croissant came from a conversation Rankin-Gee had with a friend in the UK who hadn't made up her mind whether to vote Leave or Remain.

"What if I bring you a croissant from Paris, maybe it will change your mind?" Rankin Gee responded, "And she put a cross in the Remain box in her postal vote.

"It's the simplest thing — maybe you can change someone's mind with the simple act of breaking bread," Rankin-Gee told Sputnik.

Brexit Diaries: Leaving 'Will Cost Me a Lot' - Lithuanian Shopkeeper

Brexit Diaries: 'Brits Fed Up' With Migrants Coming to UK for 'Easy Life'