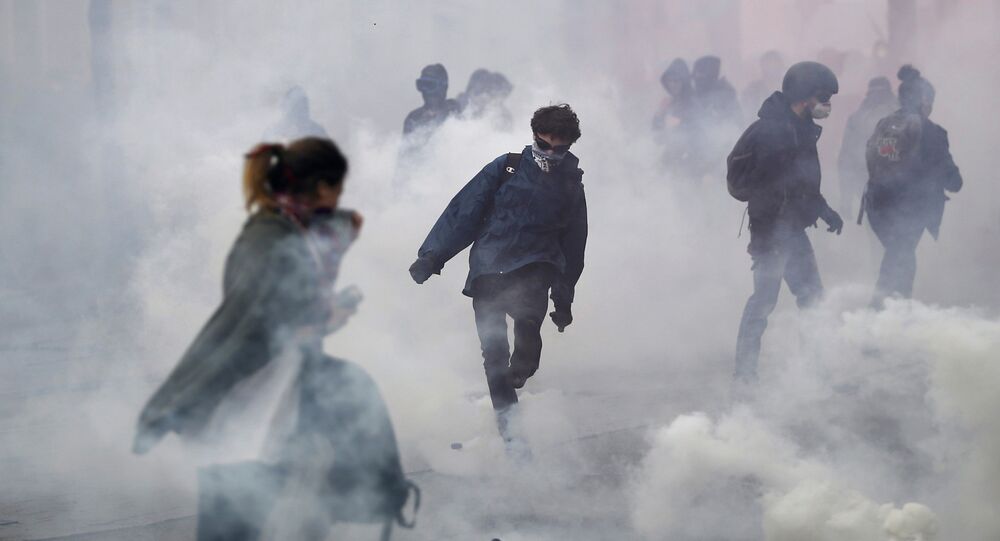 Francois Hollande - already the most unpopular French president on record - is facing a showdown with unions and students after they threatened to defy a ban on marching through Paris in a day of protests over reforms to France's labor laws.

© AFP 2020 / Martin Bureau
French Constitutional Crisis Over Labor Laws Ahead of Huge Strike
France has been beset by protests since Hollande's Socialist government forced through changes to the strictly codified French labor laws — known as the Code du travail — in an effort to make it easier for employers to take on permanent staff and allows for more flexible working.

They are hoping to stage a mass march through Paris June 23 to bolster support for the campaign to have the labor reforms overturned, despite the loss of public support. However, the authorities have threatened to ban the march if the unions refuse to stage a static protest in one place. The unions say they will defy the order and march through Paris.

This will be a major showdown for Hollande, who is already suffering the ignominy of being the most unpopular president in a generation. Meanwhile, he will have to compete for his party's nomination in the 2017 presidential election, after his Socialist Party will hold primary elections early next year, marking the first time in more than 50 years that a sitting French president is forced to vie for his party's nomination.

The labor reforms would give employers more scope to lay-off workers, cut costs and allow some employees to work far longer than the current — and much cherished — maximum 35-hour week. Other reforms include a cap on severance pay for workers dismissed by a company. The current uncertain cost of laying-off workers mean that companies are risk-averse to doing so, leaving them less flexible and — in some cases — less productive. Opponents say the reforms would undermine workers' rights on pay, overtime and breaks.

For the first time, a sitting French President will have to face an open primary election. Good bye #Hollande? https://t.co/vRq2l7PINm

​The reforms were narrowly agreed in France's lower house of parliament but were set to be thrown out by its upper house which is dominated by the Republicans. However, Hollande's government invoked the little-used Article 49.3 of the constitution to bypass parliament and enact the reforms, sparking two weeks of strikes that have seen the French transport system brought to its knees and oil refineries blockaded, causing fuel shortages across the nation.