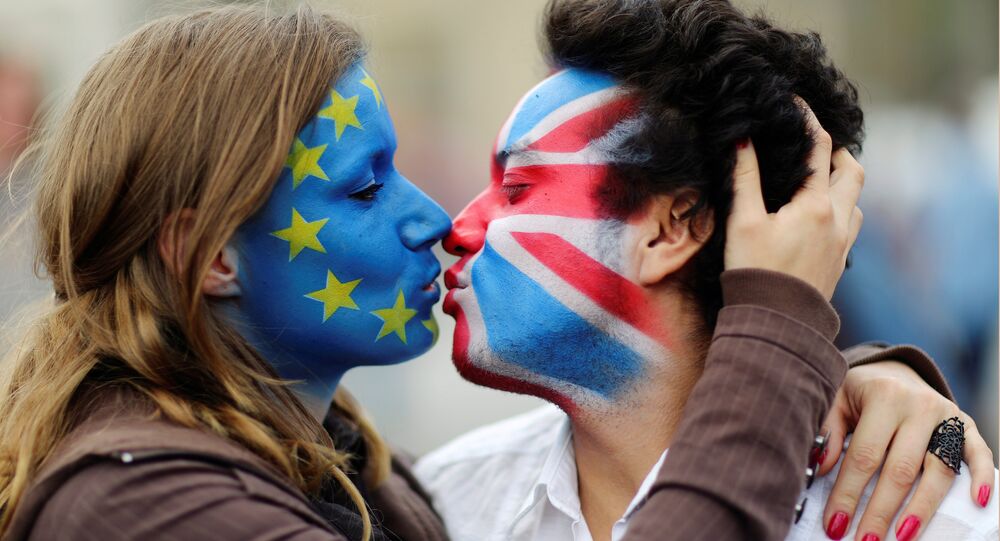 The UK has been a "force for good" within the EU and could easily negotiate further reforms to the union if it stayed in, following the In-Out referendum on June 23, a leading EU legal expert has told Sputnik.

Opinion polls are predicting a close finish at the referendum on Britain's membership of the union, with the Leave campaigners, often known as the Brexiteers, on 44 percent, and the Remain campaigners, aka Bremainers, also on 44 percent.

Panos Koutrakos, Professor of European Union Law at City University London, has told Sputnik that unravelling the UK from the EU in the event of a Brexit would be extremely tortuous and fraught with legal difficulties.

Worth reading on #Brexit and International Trade Treaties by Prof @panoskoutrakos_ of @CityLawSchool https://t.co/sreYyd3KY4 #EUref

​However, he says the European migrant crisis — which exposed deep flaws in the Schengen zone and damaged the principle of freedom of movement — and the crisis in the Eurozone are paving the way for member states to gain more leeway in certain areas. Remaining within the EU, he says, the UK could have more room to maneuver on certain issues.

"The EU is quite experienced at working in different ways in different areas and the UK knows about this because it has been successful in negotiating leeway. For instance, the UK is not part of Schengen, nor part of the Eurozone, neither does it have any duty to join either of these."

"So the idea that there has to be complete uniformity is simply not right. It is true that the Eurozone is going through and extraordinary period of crisis. It is also true that the migration crisis raises various challenges for the EU. But I cannot possibly see how things would get better if the UK were to leave.

© Flickr / European Parliament
Euro Chief Tusk: The Idea of One European Union is an 'Illusion'
The UK negotiated several opt-outs from the Maastricht Treaty, which was signed in 1992 and which set in train the creation of EU institutions that exist today. The three main institutions are the European Council (the ministers and heads of government of each member state), the elected European Parliament and the European Commission, which is the executive arm.

Under that treaty, the UK is not a member of the Schengen free trade zone — which is now at the heart of the migrant crisis, with many countries having erected razor wire fences or border controls — nor is it part of the Eurozone — the single currency area, which is experiencing turbulence as Greece, Italy, Spain Portugal struggle to maintain strict fiscal policies.

The #Brexit vote will come down to turnout. Brilliant infographic from @mattsmithetc pic.twitter.com/2hm2Df3irP

​Professor Panos Koutrakos believes that — whatever the outcome of the migrant crisis — the EU is going to have to become more flexible with different member states and that the UK — as part of the EU — will again find enough "wiggle room" to win back some powers from Brussels and seek reforms in the EU institutions.