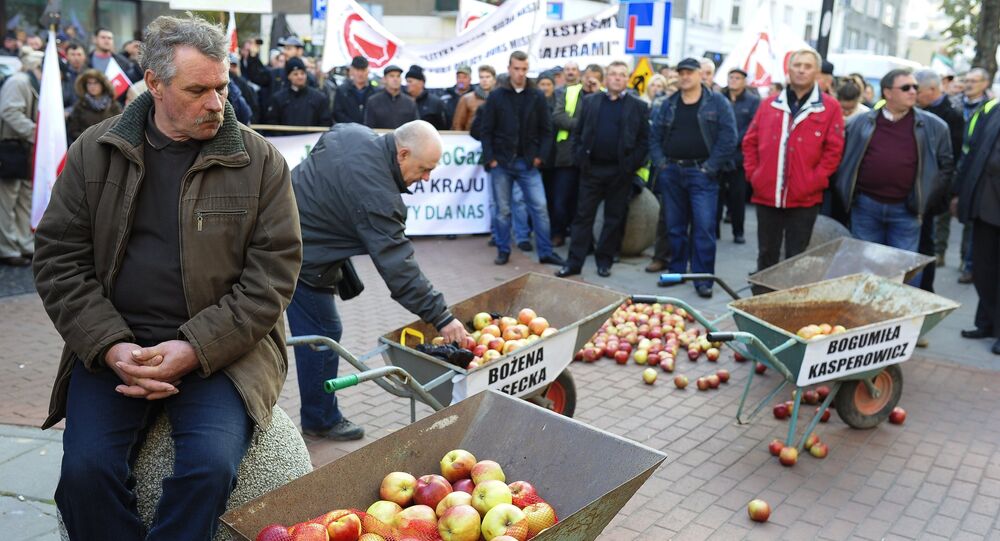 Weary of the food embargo imposed, the Polish farmers a starting to waver in their once staunch support of anti-Russian sanctions.

© AFP 2021 / Kirill Kudryavtsev
Anti-Russian Sanctions: Rebellion Brewing in Not-So-Unified European Bloc
About two years ago, roughly a third of all apples harvested in Poland were exported to Russia. That, however, was before the US, the EU and some of their allies decided to impose sanctions against Russia over its alleged involvement in the Ukrainian conflict, which in turn prompted Moscow to retaliate by imposing a food embargo on some products originating in those countries.

It’s been nearly two years since that unfortunate business began, and the Polish farmers are not amused by it, according to Deutschlandfunk public radio broadcaster.

One can still find apples from the previous year’s harvest lying on stalls at Polish agricultural markets and being sold at extremely low prices, the broadcaster remarks, pointing out that it costs farmers much effort to store their produce during the winter.

The Polish government has attempted to mitigate this problem by buying apples from farmers and then distributing the fruits at schools and other social institutions. This action, of course, negatively affects the demand for apples on the domestic market.

"We do not expect any financial support from our politicians. The best we could hope for them to open new markets for us," one Polish farmer told Deutschlandfunk, lamenting that the US’ and China’s markets still remain closed for them.

The situation has deteriorated to the point where some farmers, while publicly supporting the anti-Russian sanctions, privately confide that they would are seeking to reduce these punitive measures in order to "assuage Putin", Deutschlandfunk concludes.

"Some of the MPs with whom I talked say that after Russia drew its red lines, and made it clear that we won’t budge from there; and after we proved it with our actions in Crimea, in Syria and in several other areas, they stopped patronizing us," he said.

According to Klimov, the members of the European Parliament now treat Russian officials as "representatives of a great country that conducts an independent foreign policy."

"Furthermore, they finally realized – and I heard people talking about it during several meetings – that the EU sanctions imposed against Russia do not produce the expected results," Klimov added.

The senator also remarked that the EU politicians apparently have not yet found a way to put an end to the sanctions without losing face.