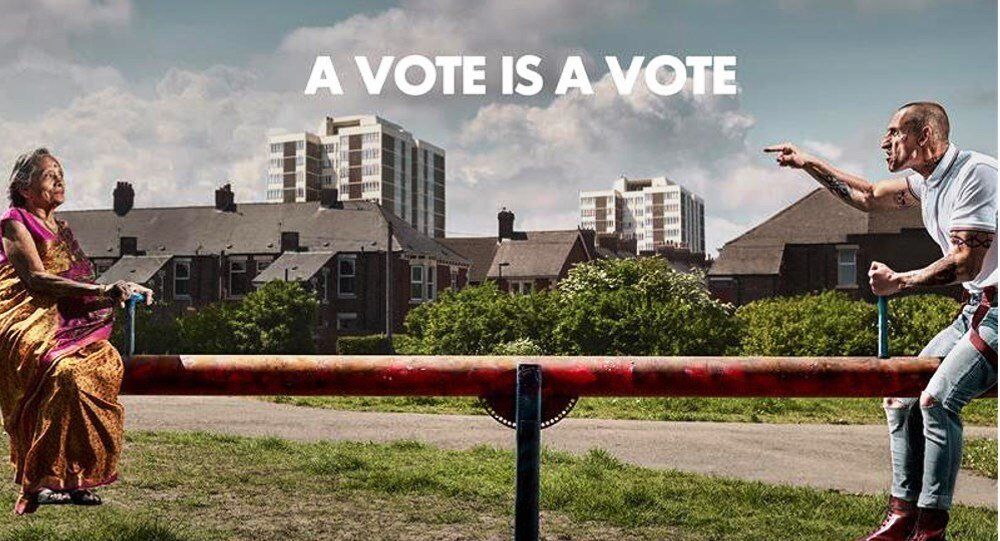 A poster released Thursday (26 May) by 'Operation Black Vote' (OBV) - encouraging ethnic minorities to register for the UK's EU Referendum on 23rd of June - has been met with mixed reactions. OBV call the image "hard-hitting," whilst UKIP's Nigel Farage said it was "disgusting" and "sectarian."

The poster depicts an elderly Asian woman and an aggressive "skinhead," sitting at either end of a see-saw, beneath the slogan "a vote is a vote."

Prominent Leave campaigner and leader of the UK Independence Party (UKIP) Nigel Farage, has accused the advertising campaign — which was designed by Saatchi and Saatchi — of "trying to divide society."

"I want to engage people in all communities to get involved in our democracy but I'm afraid this poster is a really big mistake," said Farage.

The Director of Operation Black Vote — Simon Woolley — told Sputnik that the campaign was not intentionally divisive, rather it reflected an "uncomfortable truth":

"It is a campaign that is hard-hitting, but it's one which we've sought to reflect the toxicity of the present, rabid immigration debate. In that toxicity of course, it leads some people to berate people like we have in the poster.  We haven't created the nastiness of the present debate, we're reflecting it," Woolley told Sputnik.

He added "this is what's happening out there on the streets. People of color are being berated because of the rabid, toxic immigration campaign. We haven't created that, we're reflecting it.

"It is an uncomfortable truth that clearly people have trouble with, in many ways the messenger has been shot."

A recent poll by the British Election Study suggested that ethnic minority voters might well sway the EU referendum vote, with non-white voters split 2 to 1 in favour of remaining within the European Union. However, the same polling revealed that only 57% of Indian or Black Caribbean Brits were certain to vote — as opposed to 80% of white Brits.

Operation Black Vote is a non-partisan campaign group established in 1996 to address the low levels of democratic engagement among British black and ethnic minority voters. OBV is the winner of numerous awards, including the Channel 4 Political Award (2008), with its main focus being on voter registration, lobbying and mentoring schemes.

Could a Low Voter Turnout Hand the Campaign to the Brexiteers?

UK Singer Joined EU Debate on Tuesday, He Was Getting Trolled by Wednesday