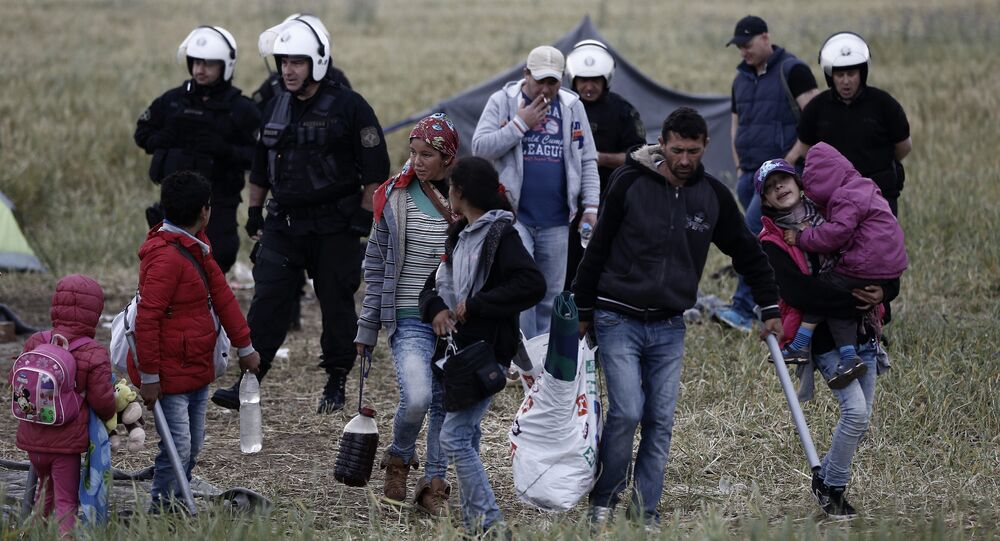 1,200 migrants were relocated from unofficial Idomeni refugee camp near the border between Greece and Macedonia to the open accommodation centers in 25 buses, according to the office of the spokesperson for the Coordinating Body for Refugee Crisis Management.

© REUTERS / Marko Djurica
Greek Authorities to Evacuate Idomeni Refugee Camp
MOSCOW (Sputnik) — More than 1,200 migrants were relocated from the makeshift camp in Greece’s Idomeni near the Macedonian border to new accommodation centers by Tuesday afternoon, with more relocations to come in the following hours and days, the office of the spokesperson for the Coordinating Body for Refugee Crisis Management told Sputnik on Tuesday.

Early on Tuesday, the Greek authorities began clearing the overcrowded, unofficial Idomeni refugee camp with 400 police officers working on the ground in every 8-hour shift.

“Until 13:20 local time, 1.205 persons were transported today to the open accommodation centers in 25 buses. The transports will continue today and on the following days,” the office said in a statement, adding that "the operation is going on in absolute peace".

"Idomeni was an unofficial, makeshift camp, so no refugees there could apply for asylum in Greece," the statement added.

© Photo : Pixabay
Greece Puts Brave Face on Tourism Despite Migrant Crisis Blight
All of the refugees, including those relocated from Idomeni and in the rest mainland Greece must stay in the country until their asylum application is completed and the relocation program is fully implemented.

"Until now, the rest of the EU member states have taken less than 1.000 relocations out of the 66.000 promised to Greece," the statement said.

Until recently, the unofficial tent refugee camp in Idomeni was hosting some 8,400 refugees and migrants, including many families with children, mostly fleeing war and persecution in the Middle East. Following decisions by many Balkan states to close their borders with Greece the camp grew exponentially in size, peaking at about 14,000 migrants.