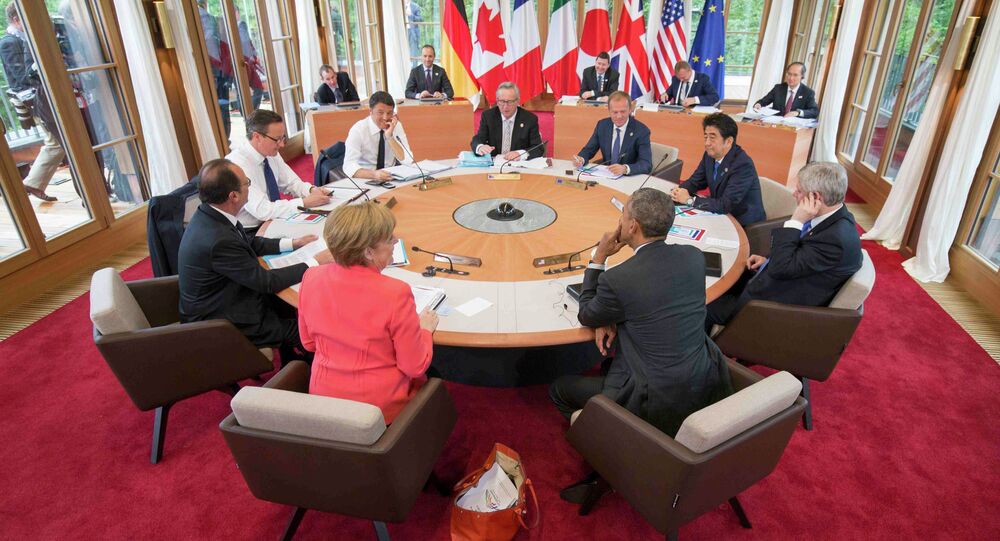 A rift on fiscal policy and currencies is likely to set the stage for G7 advanced economies to agree on a "go-your-own-way" response to address risks hindering global economic growth. Radio Sputnik discussed the agenda of the G7 summit with Dr. John Ashcroft, a Visiting Professor at Manchester Metropolitan University Business School.

© Sputnik / Konstantin Salomatin
Japanese PM's Russia Visit a Breakthrough Out of G7's Anti-Russia Vector
“The world of monetarism is in conflict because it can’t really get to grips with interest rates around the world, whether should they going lower, negative, which is bad, or whether we should look at normalizing rates to create a normal pattern of monetary backdrop to global economic growth,” Dr. Ashcroft said.

When asked whether the G7 should have a different look in the future, if it should think about what kind of a group it really is, Dr. Ashcroft said that the G7 cannot exist alone by excluding the economies of Russia, China and India; it should be involved in a global economic dialogue.

“Isolation is meaningless; you need to have this pan-world look at what’s happening. It's meaningless for the G7 to suggest that they alone can influence world events,” he emphasized.

Answering a question about the impact of Britain’s possible decision to leave the European Union, Dr. Ashcroft said that if Britain chose to leave the EU it would result in a great deal of uncertainty resulting in potential risks to investment and consumer confidence.

“There will be a short shock to the economy because we are going to lose a lot of direct foreign investment into the UK, put areas like aerospace, manufacturing and financial services. We will have a potentially negative mid-term knock-on effect on the economy, which is a very bad thing.”

Britain’s possible exit from the EU will most certainly be addressed by the upcoming G7 summit but the repercussions of this on a global scale would be quite limited, Dr. Ashcroft added.

When asked whether the participants would need the three other missing members (Russia, China and India) attending the meeting, he said that they would most certainly look at what is happening in China whose economy is still growing at an incredibly positive rate, just like India’s, and at what will eventually be happening in Russia.

“It is important that these three major economies are able to join the table at this critical time,” Dr. Ashcroft noted.

When asked when these three countries could “join the table,”, or be allowed to do so, he said that it was a difficult question and that the participants would rather focus on the outcome of the Brexit referendum in June.

“I hope that sanity will prevail and that Britain will remain in the EU,” Dr. Ashcroft said in conclusion.