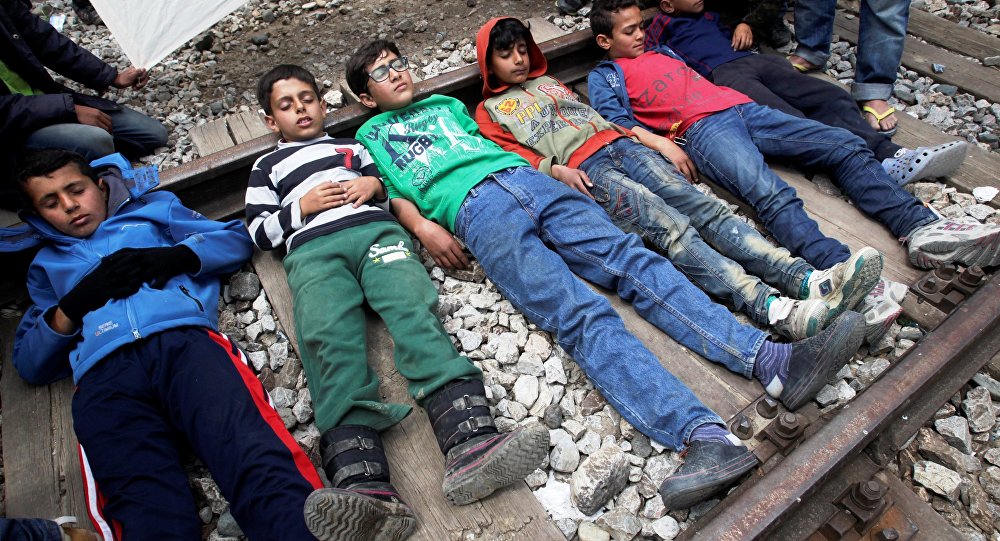 The situation in Greece is "chaotic and inhumane" with at least 50,000 people stranded in "appalling and unbearable" conditions on the country’s border with Macedonia. Meanwhile, the European Union’s border force agency welcomes a 90 percent drop in the number of refugees arriving in Greece.

"I need help but who can help me?" Alhia's husband made it to Germany but she's stuck in #Idomeni with their 7 kids. pic.twitter.com/YTfRx7YnD4

"Europe has decided to stop thousands of people from moving through Greece but did not properly plan to address their basic needs," Emmanuel Massart, Médecins Sans Frontières (MSF) field coordinator said.

"This was a fully predictable crisis, caused by the deliberate neglect of European governments and institutions," Massart added.

It's almost a month since the EU signed the one-for-one refugee deal with Turkey which has led to a significant drop in the number of migrants arriving on Greek shores.

But for many already in Greece, they are still unable to access the asylum system and are rapidly losing hope that they will be able to find relatives, according to MSF.

In Athens, MSF say the helplessness and frustration among refugees is fueling racial tensions.

"Disputes between Syrians and Afghans break out every night," Mohammad, a Syrian refugee from Latakia told MSF. Mohammad arrived in Athens in March.

"The decision to accept Syrians and Iraqis as refugees but not Afghans is not fair at all, because many Afghans' suffering even worse than the Syrians. That's what makes Afghans angry with the Syrians."

The "dirty deal" between the EU and Turkey has been condemned by human rights organizations, politicians, NGOs, lawyers and has been branded a "disgrace."

The letter from Matthias Ruete, director general of the European Commission's migration and home affairs department, to the secretary general of the Greek asylum authorities argues why Greece should consider Turkey a safe third country to return migrants and asylum seekers to, because of recent legal amendments and "assurances" provided in writing by the Turkish government.

​However, according to Statewatch, no letter has ever been made public. Its contents remain unknown and therefore, unclear as to what exactly the Turkish authorities have committed to.

"The European Commission’s position on the application of the safe third country principle to Syrian and non-Syrian nationals, as presented in the letter of 5 May 2016, is an affront to the dignity of the affected persons and to the integrity of the Greek asylum system," Pleiades said.

The number of migrants arriving in Greece may have dropped by 90 percent – but Greek and European officials still face a backlog of processing 46,000 asylum seekers, who are stuck on mainland Greece while 50,000 remain trapped in Idomeni on its border with Macedonia.