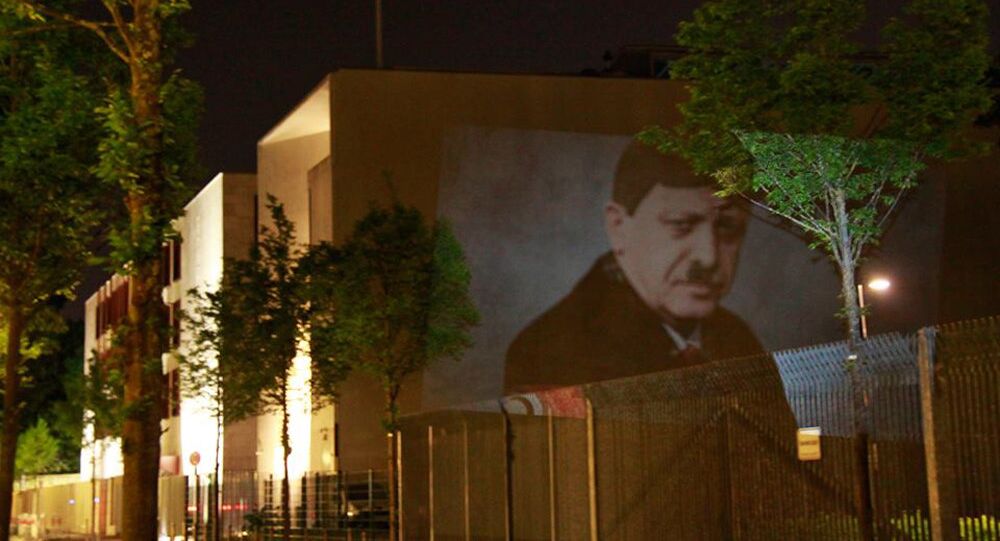 A group of German artists have projected politically-charged images onto the Turkish and Saudi Arabian embassies in Berlin, which compare Erdogan to Hitler and implicate the Saudis in supporting terrorism.

A group of German artists have used an unusual method to draw attention to the activities of the Turkish government, using a projector to cover the Turkish Embassy with images of Turkey's President Recep Tayyip Erdogan where the mustached authoritarian leader resembles Hitler.

One of the images depicts Erdogan wearing a red and white Nazi armband and Hitler mustache, and another shows him side by side with Hitler.​

© Photo : PixelHELPER
The artwork that was projected onto the Turkish embassy in Berlin
Oliver Bienkowski from PixelHELPER, the group of artists responsible, told Sputnik Germany that they are seeking to highlight parallels between the Turkish President and their country's most infamous leader.

"We wanted to draw attention to the terrible human rights violations that Erdogan has perpetrated in his country, for example: persecution of the opposition, abolition of the opposition's rights in parliament, sentry guns on the border with Syria, and restrictions on press freedom," Bienkowski explained.

The group posted their work on Facebook, where users were divided over the images; some praised the artists but one said he disagreed with an attempt to compare "Erdogan or any other contemporary politician to Hitler," calling it a "trivialization of the Holocaust."

​Bienkowski responded to the criticism, telling Sputnik that he thinks the comparison with Hitler is a valid one.

"When comparing Erdogan with Hitler, apart from the Holocaust, there are definite parallels," he said, and alleged that Turkey is supplying arms to the terrorist group Daesh.

"There are secret arms deliveries to Daesh using the camouflaged trucks of the German Red Cross, which doesn't happen in even the worst guerrilla wars. The fact that Turkey also buys oil from Daesh terrorists means that it simply cannot be a negotiating partner for the EU," Bienkowski said.

© Sputnik / HİKMET DURGUN
EXCLUSIVE: Daesh Terrorists Secretly Treated at Turkish Hospital (PHOTOS)
The artist, speaking on Friday, almost a week after the caricatures were first published on Saturday night, said that as yet the group has not received any response from the Turkish embassy or the authorities, and does not expect any legal consequences.

"We did get some death threats, but nothing has really happened."

"We projected our Hitler caricature of Erdogan onto the building as an art installation, like an ordinary newspaper cartoon, and we are relying on the freedom of the press, that's why there can be no legal action," he said.

On May 12 the group uploaded more pictures to Facebook exhibiting their artwork, this time at the Saudi embassy. Their caricatures accuse Riyadh of financing Daesh, and called on the German government to stop arms exports to Saudi Arabia.

"I am lost for words regarding Saudi Arabia. They are members of the UN human rights council, but according to official figures, they killed more people last year than Daesh. That means that the legal foundations of Daesh and Saudi Arabia are practically the same."

"Financing terrorist organizations is forbidden in Germany. For me its unacceptable that European companies like Airbus are helping Saudi Arabia to build a high-tech wall to protect itself from Daesh, while it won't take any refugees. Saudi Arabia is the most inhumane country on Earth, I can't understand at all how they became members of the UN human rights council."

Erdogan is a ‘Ruthless Tyrant Digging his Own Grave’