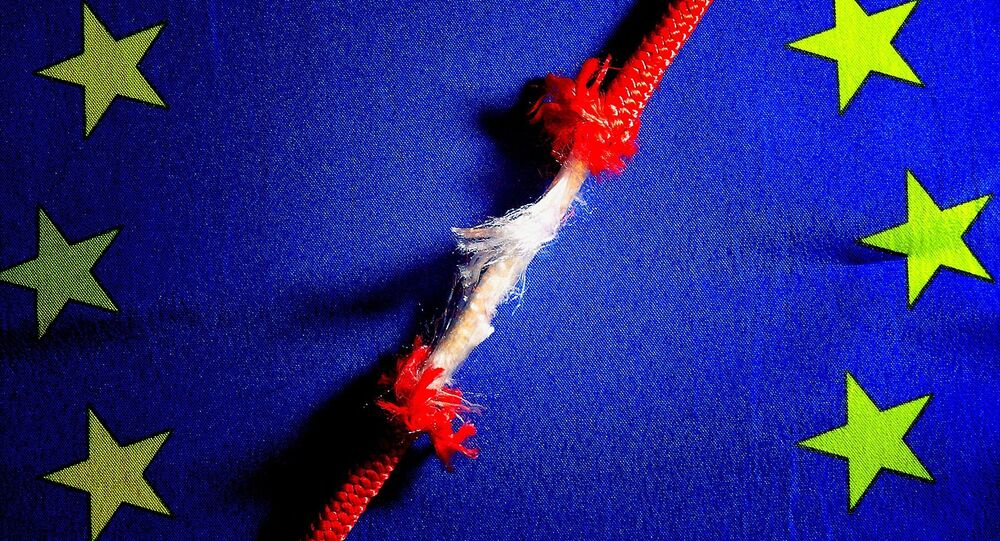 As the two sides in the Brexit campaigns on British membership of the EU continue to clash in the run-up to the In-Out referendum on June 23, Sputnik examines the state of the EU that Britain might be leaving.

The European Union comprises three institutions: the European Council, the Commission and the Parliament. The Council — presided over by Donald Tusk — comprises any meeting of EU leaders or their ministers at any time. The Council decides broad policy within the EU.

© AFP 2020 / Emmanuel Dunand
European Council President Donald Tusk responds to questions during a press conference ahead of a European leaders summit at the European Council, in Brussels on March 19, 2015.

The European Commission — under President Jean-Claude Juncker — is the executive of the EU. It is alone responsible for drawing up proposals for new European legislation, and it implements the decisions of the European Parliament and the European Council. There are 28 Commissioners — unelected — who are appointed by each member state.

The European Parliament — under its own President Michael Schultz — comprises elected lawmakers from member states, who sit in political blocs. It passes laws based on Commission proposals, scrutinizes EU work and establishes the budget, among many other things.

For the many people in the UK thinking that they will be voting to get out of human rights court obligations — giving prisoners the vote etc. — they will be disappointed.

However, the EU is already splitting itself apart over three issues: the migrant crisis, the Eurozone crisis and the controversial Transatlantic Trade and Investment Partnership (TTIP).

The European migrant crisis which began more than four years ago, exploded the moment German Chancellor Angela Merkel said her doors were open to refugees, precipitating the biggest mass movement of people through Europe since World War 2.

It led to country after country closing its borders — in contravention of the Schengen agreement on a borderless EU and breaking the fundamental principle of freedom of movement.

This, in turn, exposed the problem with the EU's borders: they were leaking like a sieve, with migrants — and terrorists — free to move in and out of Europe. A deal to relocate 160,000 migrants out of Greece and Italy took months to broker and has still moved fewer than 1,000, with many EU states opposing mandatory relocation.

Now the EU has signed a deal with Turkey under which migrants deemed "irregular" — not meeting the requirements for asylum — are dispatched back to Turkey from Greece in return — on a one-for-one basis — for a Syrian refugee being relocated from Turkey to EU member states. The deal includes an agreement that all Turks will be allowed visa-free access to EU members states by June 2016.

That deal has been shunned by many relief agencies and the UN Refugee Agency UNHCR in saying the EU-Turkey deal is either immoral or illegal as the 'hotspots' have become detention centers. They also say Turkey is not a 'safe country' for migrants to be returned to, under the Geneva Convention.

The second issue is the Eurozone, where 19 member states share a single currency, but with differing economic cycles and fiscal policies. You cannot have a functioning single currency without common economic policies — ask Athens. There have been increasing calls for those in the Eurozone to move closer together — politically and economically — even having their own parliament. Thus, there will likely be a two-speed Europe.

And finally, the EU is — albeit very quietly (some say secretly) negotiating the Transatlantic Trade and Investment Partnership (TTIP), creating a US-EU customs zone that many critics say will hand enormous powers to US companies, reduce the EU's right to protect its citizens and allow big businesses to sue governments and the EU if their goods are not allowed to be sold in the EU.

© AFP 2020 / Jerry Lampen
People rally against the Transatlantic Trade and Investment Partnership (TTIP), a massive free-trade accord being negotiated by the European Union and the United States, on October 10, 2015 in Amsterdam.

Europe is facing the biggest crises since it was set up, with a probable split between the Eurozone and non-Eurozone countries and major differences exposed by the migrant crisis, plus heavy criticism over the TTIP.

The three great institutions rumble on under their three presidents, as Britain decides whether to stay in or get out. The question many may ask on June 23 is: If the EU is already splitting apart, do we give it just one more nudge?

Caught Up in Brexit: Impact of UK Referendum on Refugees Fleeing War