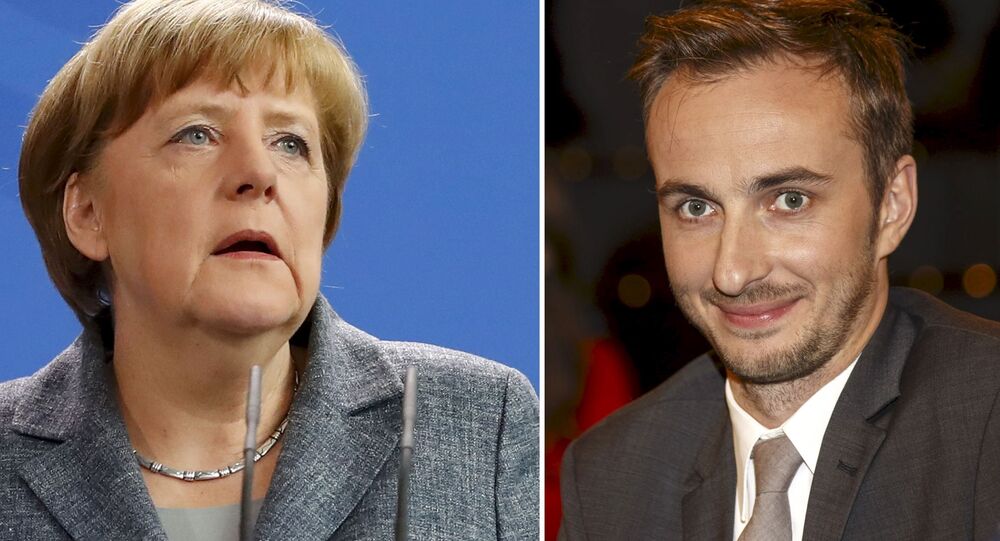 German Chancellor Angela Merkel has provoked severe anger over her decision to allow the prosecution - under a little known ancient law - of a TV satirist who mocked Turkish President Recep Tayyip Erdoğan.

In a poll for the Bild am Sonntag newspaper, 66 percent of those questioned opposed Merkel's decision to allow prosecutors to pursue the case and only 22 percent thought she was right, with 12 percent undecided.

Merkel brokered a controversial deal with Turkey under which "irregular migrants" in Greece would be sent back to Turkey in return — on a one-for-one basis — for Syrian refugees being allowed to enter EU countries. In addition, the deal allows for all Turkish citizens to have visa-free access to the EU.

Erdoğan has demanded that Boehmermann be prosecuted in Germany, putting himself on a direct collision course with Merkel, who described the satirical poem stunt as "consciously injurious." However, she is facing calls at home to stand by Boehmermann on the basis it was comedy and that he has a right to free speech.

#Germany should defend freedom of speech even when it is offensive to some. https://t.co/ojLkJc9wZ3 pic.twitter.com/D9Vdp4kVTn

Merkel took the decision last week to invoke a little-used law to allow for the prosecution of the comedian, immediately drawing fierce criticism for the likes of Human Rights Watch, which said: "German authorities should defend freedom of speech, even if the contents of the speech are offensive to some, Human Rights Watch said today. The authorities should not afford heads of state greater privilege against provocative speech."

Merkel referred the case to prosecutors under article 103 of Germany's criminal code which makes it illegal to insult foreign heads of state, with a penalty of up to five years in prison. Bizarrely, Merkel also said the article was "dispensable" and that her government would draft a proposal to remove it from the criminal code by 2018.

"By giving the go-ahead for a possible prosecution while acknowledging the law should be repealed, the German government is passing the buck for protecting free speech to the courts, instead of upholding its own human rights obligations. The government is contributing to the violation of free speech that a potential prosecution would constitute," said Hugh Williamson, Europe and Central Asia director at Human Rights Watch.